Will money finally go into the ground in 2020? 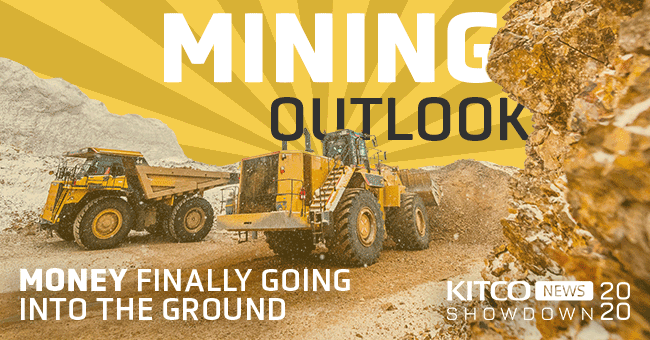 (Kitco News) After years of under-investment and some recent knockout financial results by the majors, the expectation is that money will finally get spent on exploration in the coming quarters.

Exploration spend has certainly been down. Total expected exploration expenditure in Canada in 2019 is expected to be down about 6% to C$2.3 billion compared to the year prior.

Exploration Plus Deposit Appraisal Expenditures, by Junior and Senior Companies

But while there are many reasons to push more money towards exploration, it's still an open question whether the money will actually be spent.

As Wheaton Precious Metals CEO Randy Smallwood said in an interview with Kitco this fall, higher precious metal prices have repaired company balance-sheets and the industry should be entering its development phase.

In its last quarter, mid-tier gold miner Kirkland Lake tripled its net earnings. Barrick Gold doubled its profit in 2Q, and Newmont Goldcorp said revenues were up 57% in Q3.

The majors have also been selling off assets. Newmont recently sold its half of Kalgoorlie Consolidated Gold Mines for $800 million. The company puts its total "fair value transactions" at $1.4 billion over the past month alone.

With cash in the sector, miners have the means to spend.

"It really feels to me we are back in the development phase where companies are looking at investing back into the ground," said Smallwood describing his three-cycle theory of the industry: balance-sheet repair, development and harvest. "This is the fifteenth year of Wheaton Precious Metals. We've been through a full cycle.”

And while better days are always ahead in the ever-optimistic mining sector, gold is finally getting widespread support by the whole financial community that precious metal prices are set to march higher.

So how come nothing is happening?

But just because something should happen doesn't necessarily mean it will.

Eric Coffin, newsletter writer and Vancouver-based analyst, noted that companies were finding it incredibly difficult to raise financing in the fall. There has been some successes, but the larger rally is still missing. Coffin said the market still needs out-sized successes if the junior space is going to draw in generalist money and start a larger rally.

"There is no real interest coming from the generalist," said Cook in an interview with Kitco last week talking about retail investors and exploration companies. "In the junior side, the number of significant wins you can probably count on your hands. So in general it has been a pretty poor market even though gold has done reasonably well. But we haven't seen that pass into the junior sector."

And while the majors may be flush, they aren't necessarily spending. Cashed up from its asset sales of Red Lake and Continental Gold, Newmont decided to give back $1 billion to shareholders through a stock buybacks instead of putting that money into the ground. The company said it is streamlining its portfolio.

There have been some knockout drill programs.

Soaring Great Bear (CVE:GBR) announced earlier this month that it is undertaking one of Canada's largest drill programs. The company plans to expand its drill program at its flagship Dixie project in the Red Lake district of Ontario from 90,000 metres to 200,000 metres with a 2020 budget of about $21 million. Osisko Gold, which generated record cash flows in its recent Q3, is running British Columbia's biggest drill program at Barkerville's Cariboo property.

Kai Hoffmann, who analyzes junior financing through his company Oreninc, said that financings have been selective.

"2019 was another rough year for the junior mining sector," said Hoffmann. "As we track financings below C$100 million and companies with a market cap of below $C1.5 billion, we are looking at dollars raised totaling the same as in 2015. The year started out really slow and only with an uptick in gold price at the beginning of May we saw interest slowly returning to the space. Eric Sprott single-handedly help jump start the sector by investing around C$235 million in 45 companies since early May. He accounts for roughly 11% of the overall financing total."

Hoffmann is hopeful majors will invest and maybe retails will finally come back.

"As long as retail does not invest its entire capital into ETFs we will see more exploration. We are also positive that with a gold price at current levels or as some analysts predict even higher levels, majors will start deploying more capital into the junior sector. We have seen Agnico Eagle do so successfully in the recent past and we are hopeful that others will do so as well as they see their free cash flow increase."