Is bitcoin new decade’s digital gold? Halving, regulation, and volatility are key for prices in 2020 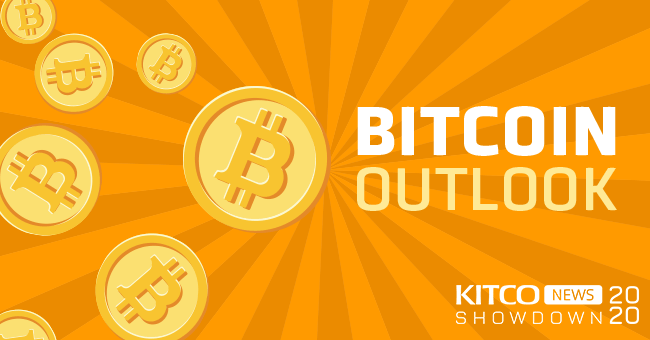 (Kitco News) Whether you love, hate, or totally ignore bitcoin, the cryptocurrency is looking to become more mainstream and less volatile in the new year and the new decade to come, according to analysts.

This year has built a solid foundation for prices, which began the year just below $4,000 and then peaked just below $14,000 in June. Since then, bitcoin has somewhat stabilized around the $7,000 level. At the time of writing, bitcoin was trading at $6,942.00.

Bitcoin has been winning the crypto race of mass-adoption, which is a sign that prices will head higher, said Bloomberg Intelligence senior commodity strategist Mike McGlone.

“Plenty can go wrong with a nascent asset, but unless the basic premises reverse -- mass adoption and fixed supply -- there's a higher probability to sustain price appreciation vs. depreciation,” McGlone noted.

The latest move above $6,500 signaled an end to the bear market, many analysts pointed out. This could be a major shift for the cryptocurrency, which has been struggling after hitting its record-highs of nearly $20,000 back in December 2017.

“Bitcoin has become a shadow of its former self thanks to regulations and crackdown fears. The second half of 2019 reflects the negative sentiment towards bitcoin which tumbled from a 2019 high of around $14,000 to as low as $6,250 in November,” FXTM senior research analyst Lukman Otunuga told Kitco News. 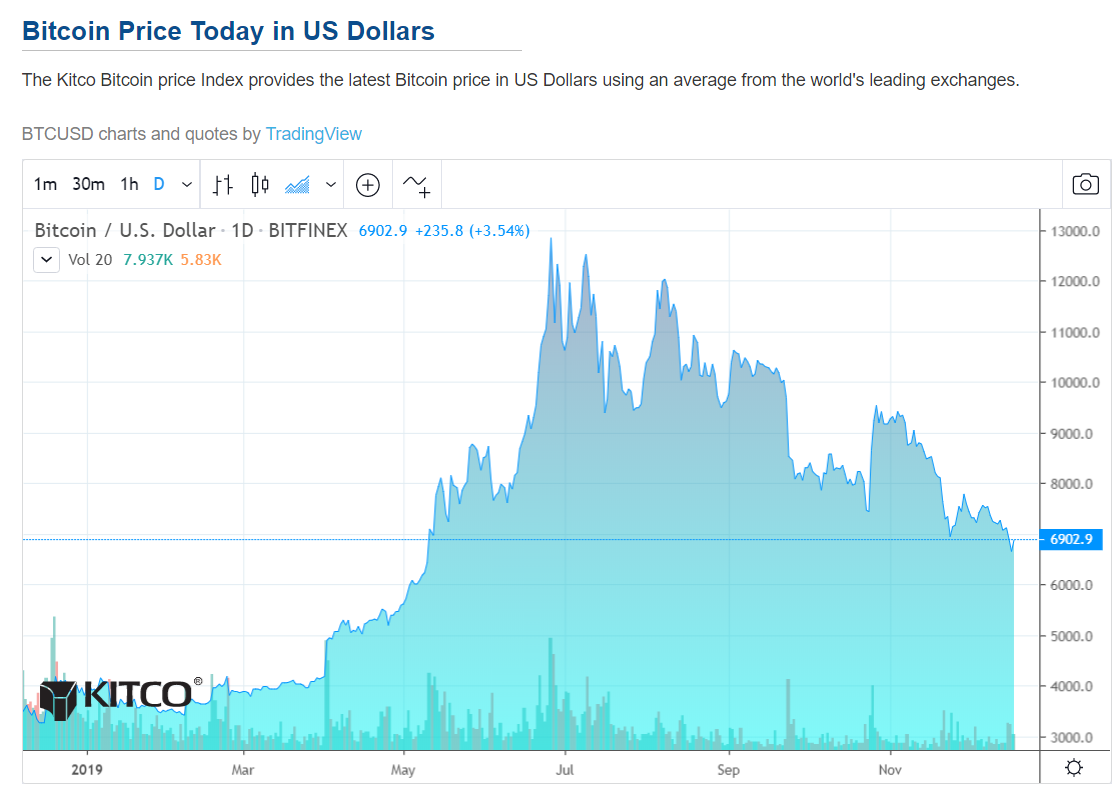 The main risk events surrounding the cryptocurrency in 2020 are the halving, scheduled for May, and more regulation. Both could really boost prices higher, according to analysts.

“The halving that takes place in May will set the tone for the new year,” U.S. Global Investors CEO Frank Holmes said.

Bitcoin halving is a recurring event programmed into the cryptocurrency every four years or every 210,000 blocks until the year 2140, when all 21 million bitcoins are estimated to have been mined. What it essentially does is slow bitcoin mining. May’s halving will see 50% fewer bitcoins generated every 10 minutes.

The effects of next year’s halving are being actively debated by the crypto community with some experts predicting a 2017-like bull-run.

One of the most important things to understand about the next halving is that it will lower the reward for mining bitcoin blocks from 12.5 bitcoins to 6.25 bitcoins, which will make mining more expensive, said Interlapse Technologies CEO and Coincurve co-founder Wayne Chen.

There is a good chance that prices could quickly double and hit new record highs in the middle of next year after bitcoin halves, Chen noted.

“The supply right now that is being released through coinbase transactions is 647,000 bitcoin over the span of the last 12 months. The demand is very close to that,” Hwang said. “What we’ll see in May, when the supply gets reduced due to the halving event, is a supply shock where the supply for the next 12 months (after May 2020) will be cut in half to 328,500 while the demand might remain over 600,000.”

Bitcoin might not rise right away, but the effects will be eventually reflected in the price, Hwang added. “Based on historical charts, the market does not go up right away. It takes at least a year. Eventually, we might see moves up like in previous halvings,” he noted.

The other driver is regulation and it is the next best thing that could happen to bitcoin in 2020, according to analysts.

Additional regulation is a path towards wider acceptance and adoption, Chen highlighted.

“For Canada, there is a big regulation coming, where virtual currency companies need to be regular as money-service businesses. There is going to be more regulatory oversight. It is a good thing. It makes institutions a little bit more receptive to doing business with crypto companies,” he said. “With crypto right now we are in a state where we need more big retail players to help with driving adoption and help people understand it.”

Bitcoin price projections are as volatile as the cryptocurrency itself. Ranging from Max Keiser’s $100,000 and “infinity” in dollar terms comments to gold bugs’ collapse calls, bitcoin has been very difficult to predict.

At the end of the day, bitcoin’s 2020 direction will depend on how it closes out the year, said FXTM senior research analyst Lukman Otunuga.

“Prices could sink lower to levels not seen since April 2019 around $5,000 if a yearly close below $7,000 is achieved. Alternatively, if $7,000 proves to be reliable support, bitcoin could be given another chance to rebound back towards $8,000 and beyond,” Otunuga told Kitco News.

The halving in May will play a central role in guiding the prices higher, according to Hwang. “Based on historical charts, the market does not go up right away. It takes at least a year.”

There is potential for bitcoin to trade north of $20,000 following the halving, with prices closely following the cryptocurrency’s mining activity, noted Chen. “People have formulas in place for mining. It has to be profitable to mine. The price can’t be totally outside of the norm,” he said.

Prior to that, however, there is room to head lower, he added. Historically, January and February are weak periods for bitcoin. “But, as we progress through the year, bitcoin starts climbing. Towards summer and fall, you see the most activity and then it winds down towards year-end,” Chen explained.

Volatility is expected to start declining as bitcoin becomes more mainstream in the new decade, according to Bloomberg Intelligence, which sees the 2020 price range as set between $6,000 and $12,000.

“Bitcoin price volatility should continue to decline in 2020, with the transition from a bear to a bull market apparently over,” wrote McGlone in his December update. “Increasing institutional interest and vehicles for exposure -- futures, options, Bakkt -- are part of the maturity process. Prices appear to be increasingly caged, with $6,000-$12,000 marking the majority of the range's bell curve.”

#Bitcoin, not gold, is the best store of value, according to Max Keiser, host of the Keiser Report, who maintains his $100,000 bitcoin call@DanielaCambone @maxkeiser #gold #Fed #KitcoNews #KeiserReport #economy https://t.co/3FQM8NGStb

Gold vs. bitcoin: Is the debate still relevant?

The gold versus bitcoin debate continued to rage on this year, with Grayscale launching its #DropGold campaign, targeting gold as an outdated investment that needs to be replaced with bitcoin.

The campaign pitted the precious metals crowd against the cryptocurrency supporters. But, many analysts and commodity experts have been choosing to move past this.

U.S. Global Investors’ Holmes said that he sees the gold vs. bitcoin debate being used for “publicity stunts” only.

Bloomberg Intelligence released a report stating: “Got a view on gold? Then you should on bitcoin,” which argued that the more mature bitcoin becomes the more it resembles the crypto market’s version of gold, especially when considering bitcoin’s supply being limited to 21 million.

“This year was part of its transition toward the crypto-market version of gold. The maturation process should continue, notably as volatility declines,” McGlone said. “Bitcoin trading will more closely mimic gold's… Both quasi-currencies are retracing bear markets and got a bit ahead of themselves in 2019.”

But, many gold experts don’t view bitcoin as being in the same camp as the yellow metal, noting that bitcoin lacks intrinsic value.

“Half of nothing is still nothing,” Euro Pacific Capital CEO Peter Schiff told Kitco News in December. “The halving does not mean anything. I don’t hate bitcoin because there is nothing there to hate. It is just an abstraction. A lot of people have confused it for gold. Original purpose of bitcoin was to be an alternative to dollars or euros. Well, because it doesn’t happen, they try to reinvent it as a store of value and digital gold. But, there is no value in bitcoin. You can’t store what you don’t have.”

On the other hand, bitcoin experts argue that the cryptocurrency has a limited supply and if given value, it would behave like digital gold.

With some additional research, gold bugs can find themselves attracted by what bitcoin has to offer, Hwang added, noting that he hopes stunts such the #DropGold campaign would encourage further dialogue.

“What I hope it does is open up the conversation and encourages people who really believe in gold to research bitcoin more and understand its technology. I believe when people educate themselves about the technology, they eventually recognize the value proposition,” he said.

Not all bitcoin experts, however, agree that the comparison between gold and bitcoin serves the right purpose.

“The debate is not 100% relevant. Gold and bitcoin are very different things like apple and oranges. They have different chemistry and mechanics behind it,” Chen said. “Gold is a precious metal. It is harvested and mined, it is scarce.”

The biggest difference between the two is its potential uses going forward. “People don’t use gold to buy things now … It is a store of value … If there was an economy collapse, people could use gold coins to buy products. But, the reality is that we moved past that. Banking is all digital,” Chen added. “Will the next generation care about gold? It is all about consuming data these days and gold is just an object. That’s where bitcoin comes in — it is made to be used and transferred across the globe.”

In the meantime, more banks and institutions started looking at bitcoin as the world braces for the new decade and all it could bring. In its latest Imagine 2030 report, Germany's Deutsche Bank asked whether fiat currencies will survive and what it could mean for alternative assets such as gold and bitcoin.

“The forces that have held the current fiat system together now look fragile and they could unravel in the 2020s,” Deutsche Bank strategist Jim Reid wrote in the report that looks at alternative ideas for the next decade. “If so, that will start to lead to a backlash against fiat money and demand for alternative currencies, such as gold or crypto could soar. The demand for alternative currencies will therefore likely be significantly higher by the time 2030 rolls around.”