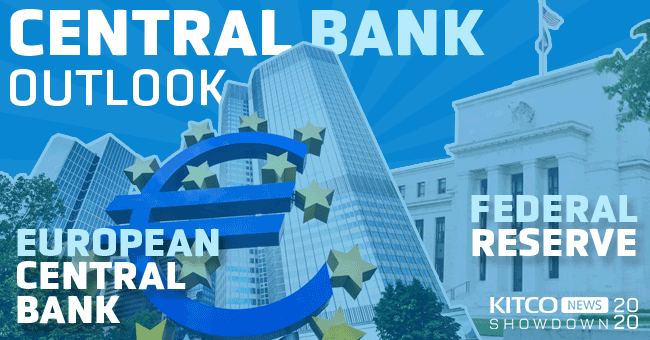 (Kitco News) - Analysts and economists look for both the Federal Reserve and European Central Bank to leave interest rates alone in 2020.

However, should the Fed alter monetary policy, observers say the most likely move will be another rate cut. In the case of the ECB, however, market watchers are more mixed and suggest the continent actually needs fiscal stimulus instead.

“Neither central bank is going to want to ‘rock the boat’ with premature policy moves in 2020,” said Pat O’Hare, chief market analyst with Briefing.com.

He added that markets may be “relieved to have the sense that these central-banking meetings won’t contain the same level of drama that they did” in recent years.

Any changes by the Fed and ECB are most likely to affect gold, compared to actions by any other major central banks. Monetary accommodation means potential for an eventual pickup in inflation, and gold is often bought as an inflation hedge. Moves by these banks also affect the euro-U.S. dollar exchange rate -- the one gold reacts to most closely.

The Fed left rates unchanged in December meeting after cutting by 25 basis points three times this year. Based on the so-called dot-plot, which shows expectations of individual policyholders, Fed members themselves now are not expecting to cut in 2020.

“We have the Fed keeping rates on hold for the foreseeable future,” said Andrew Hunter, senior U.S. economist with Capital Economics. “That’s partly because over the past couple of months, they’ve come out and said they are not planning any further rate cuts unless there is a material change in the outlook.”

Further, observers said, the U.S. economy is still growing. And, said Nomura Global Economics, the Fed would prefer not to change policy in a run-up to 2020 elections.

“Following the unusual underperformance of inflation late in the cycle, and associated declines in inflation expectations, we think the Fed will want to foster a period of ‘reflation,’” Nomura said.

Still, there are some who do envision more cuts in 2020, including TD Securities and Commerzbank.

?“I think there could be as many as two cuts before the election,” said Marc Chandler, senior market strategist with Bannockburn Global Forex.

“But by the end of Q1 or early Q2, I think the economy will be weakening,” Chandler said, adding that inflation may ease as well. “And that will allow the Federal Reserve to cut rates early in Q2.”

Nomura noted last week that interest-rate markets were pricing in “a bit less than one cut” over the next 12 months. As of Monday morning, the CME FedWatch Tool shows that the interest-rate market was factoring in a 51.5% probability that the current Federal funds target rate will still be at the current 1.5% to 1.75% as of the December 2020 Fed meeting, with a 34.6% probability of a cut to 1% to 1.25%. There was an 11.6% chance of an even greater cut and a 2.3% chance of a hike.

“We do not think the modal forecast for most market participants is cuts next year,” Nomura said. “Instead, we suspect this pricing reflects markets’ judgment that cuts are more likely than hikes. We agree with that assessment.”

“Officials have implied that it’s kind of a high bar for a move in either direction,” O’Hare said. “Certainly the bar for a rate hike is set even higher. The Fed doesn’t want this expansion to get cut off as a result of higher policy rates.”

Inflation is likely to remain subdued, close to the Fed’s 2% target, Hunter said.

“Even if inflation does rise to slightly above target, they’re not going to be in any rush to tighten monetary policy given that for most of the last decade, they’ve had below-target inflation,” Hunter added.

Andrew Busch, an independent economist at AndrewBusch.com and former chief market intelligence officer with the Commodity Futures Trading Commission, commented that “it’s going to be a tough year for the Fed.” Officials have a “really big problem that they created for themselves in 2018” when policymakers engaged in quantitative tightening and hiked interest rates at the same time, he explained. As a result, the Fed has had to constantly pump money into the financial system through repo operations.

“I think the Fed will probably spend the first quarter probably navel-gazing and trying to figure how much money they need to pump back into the system. They’ll act, for sure… I think we’ll continue to see the Fed put money into the system overnight and maybe out to a month to ensure a functioning system.”

Busch said, “the first thing I want them to do is just admit they made a mistake and then start to lay out the groundwork by which they can go back and say ‘OK, if this is what happened, these are the steps we’re going to take to rectify this and make sure it never happens again.’”

Busch commented that the ECB is in a “difficult spot.” Some analysts and economists see a need for more easing, but others said a negative deposit rate is already creating problems for banks. Several observers suggested the continent may have to rely on fiscal stimulus instead.

Chandler figures that monetary policy “has done all that it can do,” thus leaving the burden on fiscal policy.

“From a monetary standpoint, I don’t know how much further they can go into negative territory without severely disrupting their financial system,” Busch said.

A recovery in China’s economy may help the portion of the European economy that relies on exports, Busch said. However, the U.K.’s eventual move out of the European Union will have an impact, crimping the EU’s ability to spend money to spur growth.

Thus, new ECB President Christine Lagarde “will spend most of her time begging EU governments to stimulate” through increased fiscal spending, Busch added. She will also have to push for a more unified financial system in which officials could issue debt for the EU as a whole, Busch continued.

“How far can Christine Lagarde push that and have other members of the ECB, from countries in the north, accept it will be a heavy lift. I wouldn’t want that job. I think it’s going to be almost impossible to achieve.”

Melanie Debono, European economist with Capital Economics, commented that media surveys show that the ECB will not alter rates or its asset-purchase program. However, she said, her firm is among those that look for further easing amid weak economic growth.

“We suspect that inflation will remain low and therefore require further easing,” she said. “Our current forecast is for the ECB to cut the deposit rate by 30 basis points from the current minus 0.5% to minus 0.8% by the end of next year.”

Capital Economics also looks for the central bank to increase asset purchases from 20 billion euros a month to 30 billion. The bulk of the increase is likely to be in corporate bonds since government bond yields are already so low, she added.

O’Hare, meanwhile, commented that like the Fed, there is a “high bar” for the ECB to undertake action on interest rates either way. However, he said, the “higher bar” for the ECB would be cutting rates.

“There has been some pushback on the negative effects of a negative interest-rate policy being in place for so long – the headwind that provides for banks and their profitability prospects,” O’Hare said. “So I think you will probably see an ECB that is inclined to stand pat and is also inclined to talk up the potential benefits of fiscal policy coming to the fore to help move things along, as opposed to further monetary-policy moves.”