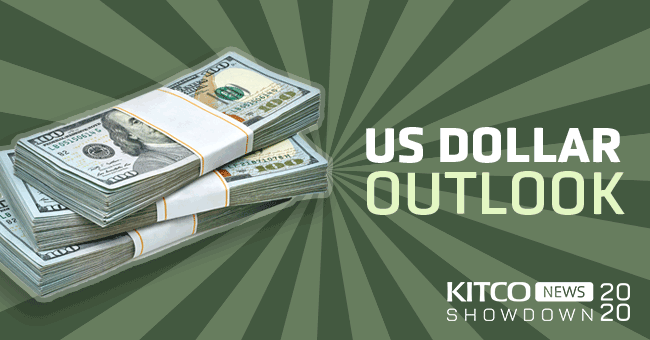 (Kitco News) - Positive economic growth and a relatively higher interest rates compared to the rest of the world mean that the U.S. dollar still has enough juice to push higher through 2020.

Although the U.S. dollar is ending the year at a five-month low, 2019 saw a resurgence of strength in the greenback as the U.S. dollar index pushed to a two-year high. With the U.S. expected to lead the western world in economic activity, many analysts see further momentum in the dollar.

A rough consensus estimate shows that economists expect the U.S. economy to grow around 2% next year. Meanwhile, the European economy is expected to grow by about 1% next year.

“The U.S. is expected to see solid growth while the rest of the world struggles,” said Win Thin, global head of currency strategy at Brown Brothers Harriman. “I still like the U.S. dollar story in 2020.”

Looking at the dollar index’s technical outlook, Thin said that the first significant resistance point investors need to watch in the new year is 98.50, which represents last month’s high. However, the big target for the year will be 100. The last time the index traded at that level was late April 2017. 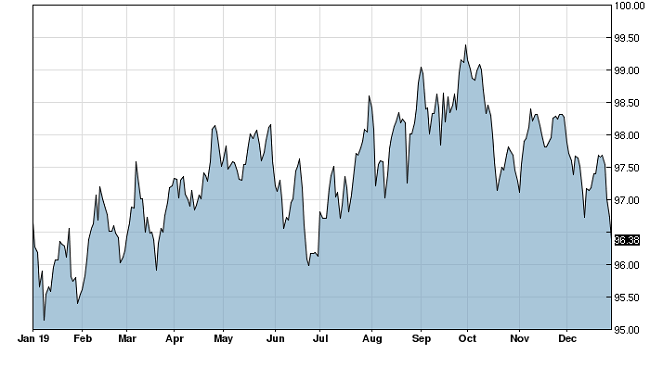 Neil Mellor, senior currency strategist from the Bank of New York Mellon, said that while the U.S. dollar has enough momentum to push to 100 next year, he doesn’t expect that major resistance point to break.

He added that a strong U.S. dollar is less about domestic strength and more about weakness around the world.

“It’s getting harder and harder to find other currencies to buy,” he said. “The U.S. economy is in the best position, so that is benefiting the U.S. dollar.”

Although the U.S. dollar will remain the de facto currency in 2020, Mellor said that because of all the uncertainty, investors should not expect to see an easy trade.

“Investors will have to be nimble in the currency markets in 2020,” he said. “The dollar will continue to do what it’s done and go higher, but with lots of volatility.”

Mellor added that the global currency market needs to see some higher inflation pressures. Central banks around the world are maintaining extremely loose monetary policy in an effort to boost inflation. If prices start to rise, then expectations could begin to shift for tighter monetary policy. However, that scenario is still a long way away, Mellor noted.

“The U.S. dollar has the biggest advantage, but really we expect global currencies to spin their wheels in the mud until inflation traction picks up,” he said.

However, not everyone is optimistic about the U.S. dollar, especially as it ends 2019 on a sour note, trading at a five-month low.

“The U.S. dollar index hit a five-month low Tuesday and is poised to close at a technically bearish monthly low close today, on the last trading day of the month, which would suggest more downside price pressure for the greenback in early January, or longer,” said Jim Wyckoff, senior technical analyst at Kitco.com, said in a special report.

Other market analysts have said that the U.S. dollar has to contend with growing twin deficits in the U.S. even if the domestic economy remains relatively stable.

Although the U.S. dollar still looks a little expensive, currency analysts at T.D. Securities said that they are not expecting to see an end to broad U.S. dollar strength just yet.

They said that for the greenback to turn, they would need to see some stability in geopolitical conditions and global growth.

“Ultimately, we think the fate of the USD lies with the evolution of the world outside, not inside the U.S.,” the analysts said. “Stabilization of global growth, a reduction of uncertainty and geopolitical tensions, and less global central bank easing would start to work against the USD.”

Thin said that the most significant risk he sees for the U.S. dollar is if the U.S. economy unexpectedly falls into a recession in 2020.

“A recession would force the Fed to cut rates aggressively and that would weigh on the U.S. dollar,” he said.

Mellor also expects that weak U.S. growth is the biggest threat to the dollar. He added that he doesn’t project a recession next year as the U.S. central bank will use all its tools to do everything it can to avoid an economic slowdown.

Many commodity analysts note that gold and the U.S. dollar can rally together as uncertainty is expected to be a dominant theme in financial markets.

“Gold has held on to its summer gains even in the face of a stronger U.S. dollar. I think that is a sign of an important shift in the marketplace,” said Ronald-Peter Stoeferle, fund manager of Incrementum AG and one of the authors of annual In Gold We Trust report.

Other commodity analysts have noted that in an environment where nearly 70% of global government bonds are in negative territory, gold becomes a valuable safe-haven alternative, regardless of what is happening in currency markets.