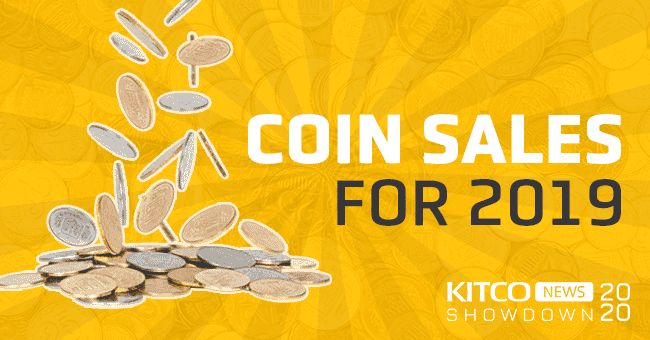 In contrast, the gold coin demand was extremely weak as traders opted for ETFs, futures, and record-high equity markets, according to analysts.

One of the reasons behind a strong gold price and weak demand for gold coins is investors choosing to hold gold in other forms, such as gold-backed ETFs and futures.

“It was mainly professionals, hedgers and you had a lot of buying from South America,” RBC Wealth Management managing director George Gero told Kitco News on Thursday. “Money that normally could have gone into gold coins ended up going into gold ETFs or gold futures.”

The global slowdown has been bringing hedgers into the gold space as many investors become concerned with the continued "up move in the stock market,” Gero noted.

“We started off the year at roughly 71 million ounces. Now we are at 81 million ounces. There has been a significant increase in positioning in ETFs over the year. We have also seen pretty robust increase int he latter part of the year in long exposure as far as speculative funds as well. And central banks — looks like their purchases were at another 50-year high in 2019,” Melek pointed out.

Melek added that gold coins had to compete with the record-high stock market in 2019. “Much of what has probably been happening is that there were much better returns in other markets, equities in particular. S&P 500 is up 30% year-on-year,” he said.

Gero also said that the “roaring stock market” has taken away demand from coin sales.

On top of that, the strong U.S. dollar might have played as a deterrent to the U.S. Mint’s gold coin sales, Melek noted.

“Last year has been indicative of the fact that the U.S. dollar has been a lot stronger than anyone would have thought. Because of the trade issue, you had China’s currency not perform particularly well … We haven’t seen as much physical demand because in other currency-terms it seemed expensive,” Melek stated. 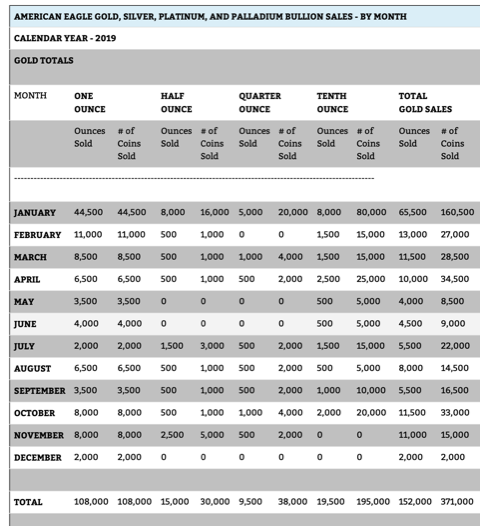 This was the third year in a row that the U.S. Mint reports very weak coin sales. In 2018 gold and silver coin sales of the American Eagle hit the lowest levels in eleven years.

The World Gold Council highlighted a similar weak trend globally as well, noting that demand for gold bullion coins and bars nearly halved in the third quarter of 2019 when compared to 2018.

“The [year-to-date] picture is similarly bleak: cumulative demand in the first three quarters was at its lowest level since 2009,” the WGC said. “A soaring gold price across multiple currencies has prompted retail investors in many markets to either wait in anticipation of a price dip or sell a portion of their holdings to realize profits.”

The overall consumer demand for physical bullion also dropped dramatically in 2019, especially in markets like India, where prices rallied to record highs in local currency.