Editor's Note: 2020 is expected to be another year of significant uncertainty and turmoil. But the question is what assets will emerge the victor when the dust settles from the global trade war, Brexit, recession threats, negative bond yields. It's a showdown of global proportions, so don't miss all our exclusive coverage on how these factors could impact your 2020 investment decisions. 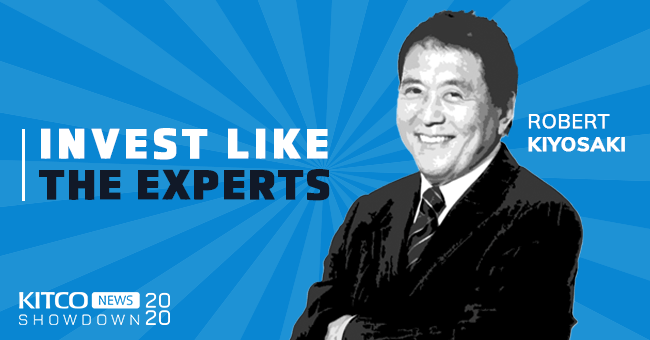 (Kitco News) - The U.S. has officially closed the book on a momentous decade as the S&P continues its longest bull run in history; the market has rallied consistently for the last 10 years. The Index is up 184% since 2010.

The gold market is also attracting new attention on the cusp of the new epoch. Although prices are still down from its record highs hit eight years ago, the precious metal ended the decade with a gain of 34%.

The questions investors are now asking is: what is in store for markets as the world embarks on a new decade. What are the risks and opportunities to watch for in the next 10 years?

For Kitco News’ Showdown 2020 outlook, we are have asked a panel of experts their thoughts on the next decade and how they would invest $100,000 for the next decade.

This week we talk with Robert Kiyosaki who recomments people buy "real money," gold and silver, as it looks like the world is on the cusp of another financial disaster.

Part I: U.S. to remain a global leader in the next decade - Frank Holmes

Part III: Hold 20% in gold as global economy is an accident waiting to happen - Frank Giustra

In my opinion, silver is the most undervalued, lowest-risk, best investment of all asset classes.

Why buy stocks and bonds when both are in bubbles?

I have been accumulating silver coins since 1964. I have purchased gold coins also, and store them legally, overseas, outside the banking system.

In 1972, while flying for the U.S. Marine Corps in Vietnam, I purchased my first gold coin, a SA Krugerrand, in Hong Kong, for under $50 US. In 1972, it was illegal for Americans to own gold. I still have that Krugerrand, which is also stored overseas. Today, that same Krugerrand is worth about $1,500. I have been saving gold and silver coins, not U.S. dollars, ever since.

I will stop accumulating silver, after spot silver passes $40.00 US an ounce.

What are the biggest trends you are watching heading into the new decade?

I am watching the collapse of global pensions. Once global pensions begin collapsing, I will wait and see how governments and central banks respond to this massive multi-trillion-dollar global crisis.

If they, governments and central banks, begin "printing" more fiat money to bailout pensioners, I will back up the truck on gold and silver.

What are the biggest threats you see in the next 10 years?

In January 2020, my latest book Who Stole My Pension?, co-authored with the #1 pension-fund-fraud whistle blower, Ted Seidel, will be released. It is not a book with a happy ending although it does offer workers with pensions and retirees options to help stop the looting.

How long do you think the bull run in equities will last?

When people ask me: "What price should I buy gold and silver at?" I say, "If you have no gold or silver, start accumulating today, and do not worry about price." I believe that when the panic hits, gold and silver will
disappear from markets as prices climb.

When I am asked: "Do you recommend mining stocks?" I say: "I have taken two junior miners public on the Toronto Stock Exchange. The gold mine was in China and the silver mine in Argentina." I then say: "If you are just starting out, start first with real gold and silver coins. Once you have a base of gold and silver coins, then you may want to start speculating in mining company stocks."

I end by saying: "After founding both a gold and a silver company, I know from personal experience it is much less expensive and less risky to buy real gold and silver coins, than start a junior mining company."

Any final comments about what the next decade holds for investors?

Jim Rickards said it best in his book, The Road to Ruin… and I paraphrase here from Kurt Vonnegut's book Cats Cradle:

"Nice, nice, so very nice.
So many people,
Trapped in the same device."

Billions of people are trapped in the mental-emotional prison of "Go to school, get a job, save money, and invest in a 401(k)." Jim and I will release our first co-authored book, The Ravens, in May of 2020.

In his book, The Road to Ruin, he begins with the story of Felix Somary, born in 1881. He was called the Raven of Zurich, for his ability to see financial catastrophes when others were complacent. Somary not only foresaw the First World War and the Great Depression, but also the Second World War before others did. The English-language translation of Somary's memoir is titled The Raven of Zurich.

In Greek mythology, the Raven symbolizes wisdom and insight… and is the god of prophecy.

I am a co-author with Jim, as a student of Dr. Buckminster Fuller, father of the geodesic dome which was the U.S. Pavilion at Expo 67, the World's Fair on the Future. Dr. Fuller was known as the "Planet's Friendly Genius," as a futurist, and called the "Grandfather of the Future" by John Denver.

In January of 2008, I was on CNN with Wolf Blitzer, forecasting the fall of Lehmann Brothers, which occurred in September of 2008. To "see the future," I simply used the forecasting methods taught by Buckminster Fuller.

The primary reason Jim Rickards and I are vocal advocates of gold and silver is because we have studied modern-day "ravens" like Felix Somary and Dr. Buckminster Fuller… and we can see the future. We join forces, in our book The Ravens to teach readers how to predict, prepare for, and profit from the turbulent economic times we see for the future.