Geopolitics and trade: Steering through top risks of 2020 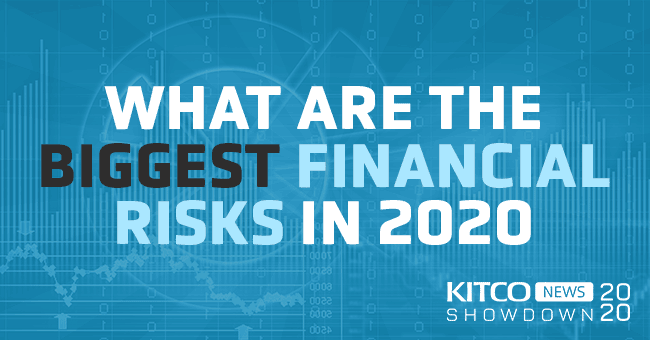 (Kitco News) The biggest risks to financial stability in 2020 revolve around geopolitics and trade, according to analysts.

“Part of the reason why people are getting bullish is the idea that a lot of the grey clouds [from 2019] are starting to get answers and the year 2020 could be when we get the answers,” said Pepperstone head of research Chris Weston.

But political events make trading difficult, especially when it comes to the pricing of risks, added Weston, noting that he expects to see a “highly volatile performance in the markets in 2020.”

“Through lowering rates and through massive re-establishment of balance sheet expansion, a lot of central banks are taking performance from the future. And to get anywhere near close those financial gains going forward will be very difficult.”

A lot of the global growth uncertainty going forward centers around trade agreements and tariffs, said Kevin Rich, consultant for The Perth Mint. “That is the top risk we see in 2020.”

One of the biggest risks of 2020 remains the U.S.-China trade negotiations, analysts told Kitco News.

As the new year begins, the U.S.-China trade war concerns seem to be hiding under the radar.

“The U.S.-China trade talks have clearly left center-stage in the face of the developments in the Middle East, but a team from China is expected to arrive in the United States for a signing ceremony on January 15,” said INTL FCStone head of market analysis for the EMEA and Asia regions Rhona O’Connell.

If trade negotiations with China were to fall apart, risk of a recession would exacerbate, O’Connell told Kitco News.

“That would continue to build uncertainty into economic outlook and will have an extended effect of fixed investment, which has already been struggling,” she noted. “[But], China needs the U.S. and the U.S. needs China, so I suspect that trade pact will be signed.”

Some analysts see the phase one deal as a temporary measure that stopped additional tariffs from coming into effect.

"What seemed to have been agreed upon was just enough to delay the Dec. 15 tariffs. Nothing of the sort that was lauded to be a phase one trade deal,” Blue Line Futures president Bill Baruch told Kitco News back in December.

The new risk in 2020 is the rising tensions between the U.S. and Iran following last week’s news that the U.S. killed Qassem Soleimani, the top commander of the elite Quds Force of the Revolutionary Guards, in a military airstrike.

“Geopolitical risk is probably concentrated more in the Middle East than it is anywhere else apart from the obvious exception of Hong Kong and China,” said O’Connell.

In the latest geopolitical move, the U.S. President Donald Trump tweeted that the U.S. has 52 Iranian sites set for attack if Iran retaliates against the U.S. for the killing of its general.

At the same time, Iraq voted on Sunday to expel U.S. troops, while the U.S. threatened sanctions against Iraq if the vote was to be carried out. Also, Iran announced on Sunday that it will abandon limitations on enriching uranium, taking a major step back from the 2015 nuclear deal.

“2020 was supposed to be the year where the global economy bounces back to life after the US and China trade tensions thawed and investors got more clarity around Brexit. Events over the last week have undoubtedly put this outlook at risk,” said FXTM chief market strategist Hussein Sayed when commenting on the U.S.-Iran tensions.

“Investors will remain on the defensive… as everyone now awaits a possible retaliatory response by Iran. This may not be an immediate one, but rather a protracted event which investors need to carefully calculate when determining their portfolio’s risk,” Sayed added.

Another key risk facing the markets in 2020 is the U.S. presidential election that will take place on November 3.

The U.S. presidential election needs to be closely monitored as it directly impacts the financial markets, said the Australia and New Zealand Banking Group (ANZ) in its 2020 outlook.

The U.S. presidential election could potentially inflate recession fears, according to analysts.

"We still see scope for U.S. election to perhaps be a key turning point for the global economy next year as well," Cooper said.

However, Capital Economics chief U.S. economist Paul Ashworth noted that the U.S. election is more likely to impact the equity markets rather than the real economy.

"We've heard a lot about the rising popularity of so-called progressive Democratic candidates ahead of the primaries — Elizabeth Warren and Bernie Sanders. I'm still not convinced that if either of them became president, it will necessarily be negative for the real economy. And that's because the fiscal stimulus at the end of the day is still fiscal stimulus. If it is party funded by bigger deficits, you could still expect to get stronger economic growth in the short-term," Ashworth explained.

So far, market reaction to the U.S. President Donald Trump impeachment news has been muted with analysts saying it bears little significance for investors because the Republican-controlled U.S. Senate is likely to vote against removing Trump from office.

While this scenario is very likely, the problem could arise with "further Ukraine-related mudslinging between Trump and Joe Biden," said Hunter last month.

This could potentially damage both candidates' chances of winning and leave an opening for a more progressive Democratic candidate like Elizabeth Warren, Hunter added.

"The prospect of a big fiscal stimulus means we wouldn't necessarily expect Warren to be bad news for the economy, but her plans to go after the banks, tech firms, pharma, and energy sectors could hammer the stock market," he said.

Should investors be worried about a possible recession next year? The looming recession risk is much lower at the end of 2019 than mid-year, according to analysts. But, any breakdown in the U.S.-China trade talks could change everything.

Recession fears were at their highest levels in mid-2019, when the yield curve inverted for the first time since 2008. The inversion is usually viewed as an indicator of a pending downturn by many economists. It happens when yields on short-term bonds are higher than those on long-term bonds.

The macro-environment is looking up in 2020, including the phase one U.S.-China trade deal, improving economic data, and the effects of global monetary policy easing across the globe.

"We are likely to see some stabilization next year as the impact of monetary policy easing around the world is felt. We saw a number of dovish surprises from central banks globally in 2019. This should add some support to growth generally," Cooper said.

"Our 2020 global growth forecast is 3.3% up from 3.1% in 2019. While 2019 was a year of central banks turning accommodative and delivered a wave of dovish surprises, we do not expect the U.S. or global economy to move into recession in 2020. The growth benefits are likely to be felt in 2020 as rate cuts have a positive impact on the economy with a lag of about one year," Cooper said.

It is also important to keep in mind that even though we are likely to see a recovery in 2020, it will be a “fragile” process, said Asia-headquartered financial services group Nomura in its annual outlook.

One remaining major concern for 2020 is that there’s still about $17 trillion worth of negative-yielding bonds, said O’Connell. “It is not very likely that we are going to see all that negative-yielding debt move back into positive space,” she added.