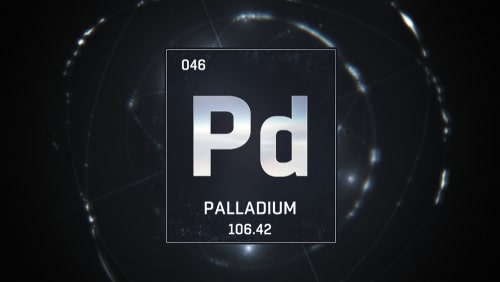 (Kitco News) Palladium kicked off the first full week of the new year with a fresh record high as prices touched an all-time peak of $2,011.48 an ounce.

Spot palladium was last trading at $2,005, up nearly 2% on the day, according to Kitco’s aggregated charts.

The precious metal is currently benefitting from the overall safe-haven optimism amid rising geopolitical tensions, as well as its own tight supply-demand fundamentals.

"Middle East tensions saw gold spike up again today … Palladium continues to make new highs on the back of deep structural deficits," said Rhona O’Connell, INTL FCStone head of market analysis for the EMEA and Asia regions. "Unlike the rest of the industrial complex, [palladium is] reflecting bullish fundamentals."

The latest move up is connected to palladium tracking other precious metals higher, noted Blue Line Futures chief market strategist Phillip Streible. "All these metals are working together on the geopolitical news."

Palladium could easily break $2,500 an ounce in 2020 as its demand "has been unstoppable," Streible told Kitco News. "It will keep going until demand reaches the saturation point."

The latest geopolitical news saw U.S. President Donald Trump tweeting that the U.S. has 52 Iranian sites set for attack if Iran retaliates against the U.S. for the killing of its general. At the same time, Iraq voted on Sunday to expel U.S. troops. In response, the U.S. threatened sanctions against Iraq if it carried out the vote. Also, Iran announced on Sunday that it will abandon limitations on enriching uranium, taking a major step back from the 2015 nuclear deal.

"This is arguably the most serious geopolitical development in many years, and whose repercussions will play out for a long time to come. That will likely keep trader and investor risk aversion elevated for some time to come. That’s bullish for safe-haven assets like precious metals and U.S. Treasuries," wrote Kitco’s senior technical analyst Jim Wyckoff.

Palladium has done extremely well in 2019, rising 55% in the last 12 months. The majority of palladium's demand comes from the auto sector as the metal is used in catalytic converters that reduce emissions in gasoline engines.

"Ultimately, what the market is trying to price in here is scarcity down the road. There is certainly isn't a lot of new capacity coming in from the mining side. Recycling is probably steady. We expect a bit of inflection on the demand side and not really seeing significant growth on supply," TD Securities head of global strategy Bart Melek told Kitco News back in November.