(Kitco News) Gold prices are starting a new bull run, according to Bloomberg Intelligence, which is eyeing $1,400 an ounce as initial support and $1,700 as initial resistance.

“Gold is embarking on a new bull market,” wrote Bloomberg Intelligence senior commodity strategist Mike McGlone in his January commodify outlook. “The dollar-denominated precious metal is ending 2019 at the best level in six years and has made new highs in other currencies, notably the euro.”

It will be just “a matter of time” before gold in U.S. dollar terms follows the price of gold in euro terms to new highs, McGlone said.

“About $1,400 an ounce, which held resistance for five years, is good initial support at the start of the 2020s. The 2013 peak of about $1,700 is initial resistance,” the strategist highlighted.

The two major supporting drivers in the next decade will be higher stock market volatility and a weaker U.S. dollar.

“The unlikeliness of the record-high greenback to keep appreciating with similar velocity as it has since 2014 is an additional tailwind for gold prices,” he added. 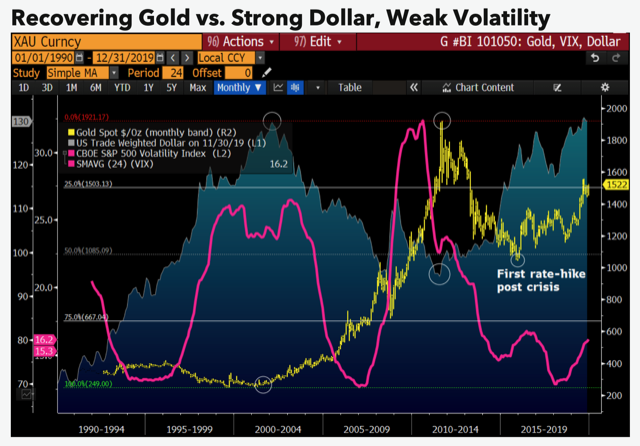 Gold has been gaining strength since the Federal Reserve’s interest rate hike in December 2015 and the metal “will need a good reason” to stop its advance.

“A low chance of sustained dollar strength and minimal stock market volatility tilts our gold-price outlook favorably,” the strategist wrote. “Ending the past decade near the midpoint of its 10-year range sets the metal ahead of most commodities, which remain mired in bear markets.”