(Kitco News) Two different mints on the opposite sides of the globe are reporting very contrasting coin sales results from 2019.

The Perth Mint in Australia saw a surge in gold coin sales towards the end of 2019, while the U.S. Mint reported dwindling sales throughout the year. 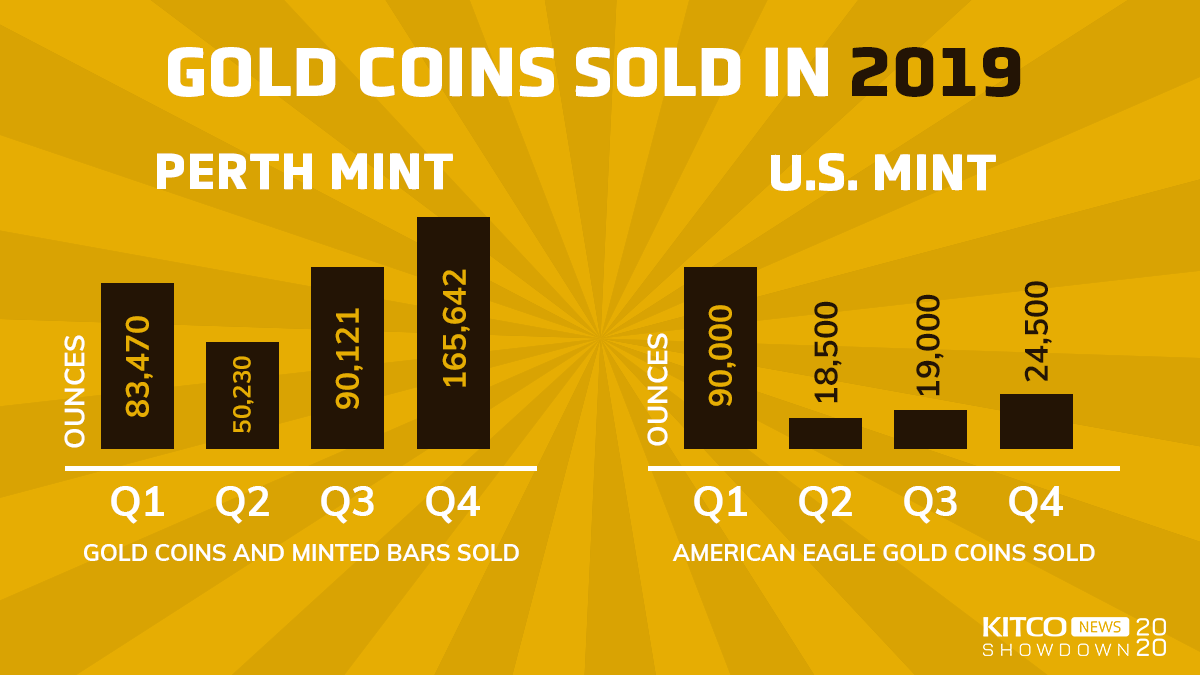 The December data from the Perth Mint revealed that it saw a 45% uptick in gold product sales in comparison to the previous month.

There was a total of 78,912 ounces of gold coins and minted bars sold in December, marking the highest monthly increase since October 2016, Perth Mint said on Wednesday. The year-over-year comparison shows that sales were up 170%.

"The rally in precious metals is a continuation of a strong upside move which can be dated back to Q4 2018 when a sharp decline in equity markets reignited demand for gold and other safe-haven assets. Since then, gold has rallied by more than 30% in Australian dollar terms," Perth Mint said in its blog post.

The Australian mint said it saw increased demand firsthand last year, highlighting Germany as the critical area where the demand was coming from.

"In troy ounce terms, December 2019 demand for our Australian gold bullion coins and minted bars neared 79,000 ounces – up 45% on the previous month. Driven by strong sales of Kangaroo and Lunar coins, particularly in Germany, the number of ounces sold in December 2019 increased 170% compared to the same period in 2018," Perth Mint said.

The second-best month for gold sales was November with Perth Mint selling 54,261 ounces of gold coins and minted bars.

In comparison to Australia's positive results, the U.S. Mint saw declining sales of its American Eagle gold coin in 2019. Even though sales started strong at 65,500 ounces sold in January, the numbers quickly fell, dropping to just 2,000 ounces sold in December.

Overall, the U.S. Mint sold a total of 152,000 ounces of the gold American Eagle coins in 2019, marking the lowest level on record since the Mint began recording the data in 1986.

Analysts pointed to the rallying U.S. stock market as a possible reason why investors chose not to invest in the physical gold coins.

"Much of what has probably been happening is that there were better returns in other markets, equities in particular. S&P 500 is up 30% year-on-year," RBC Wealth Management managing director George Gero told Kitco News last week.

On top of that, the strong U.S. dollar might have been to blame for such low sales.

"Last year has been indicative of the fact that the U.S. dollar has been a lot stronger than anyone would have thought. Because of the trade issue, you had China's currency not perform particularly well … We haven't seen as much physical demand because, in other currency-terms, it seemed expensive," said TD Securities head of global strategy Bart Melek.