LONDON (Reuters) - The U.S. dollar rose on Friday and is on track for its biggest weekly gain in two weeks as dissipating geopolitical tension prompted investors to buy riskier currencies, while the Japanese yen and the Swiss franc gave up all their recent gains.

With the United States and Iran backing away from further confrontation, traders will focus on monthly U.S. jobs data, which will follow a batch of strong economic figures.

“The galvanising force for the dollar rally this week was the fizzling of tensions in the Middle East with the recent U.S. data also giving investors some further room for optimism,” said Ricardo Evangelista, a senior analyst at ActivTrades.

Against a basket of its rivals .DXY, the dollar gained 0.1% on Friday to 97.53, taking its cumulative gains this week to 0.7%, its biggest weekly rise since early November.

Recent data have showed a pick-up in the U.S. services, falling joblessness claims and solid private hiring. Traders are focused now on December jobs data due at 1330 GMT. The consensus forecast is the United States added 164,000 jobs in December, after 266,000 were added in November.

The dollar’s gains were particularly pronounced against the Japanese yen and the Swiss franc, against which it has rallied 1.7% and 1% respectively from this week’s lows.

“Hopes of an interim trade deal between China and the U.S. as early as next week is also boosting the dollar,” said Manuel Oliveri, a currency strategist at Credit Agricole in London. 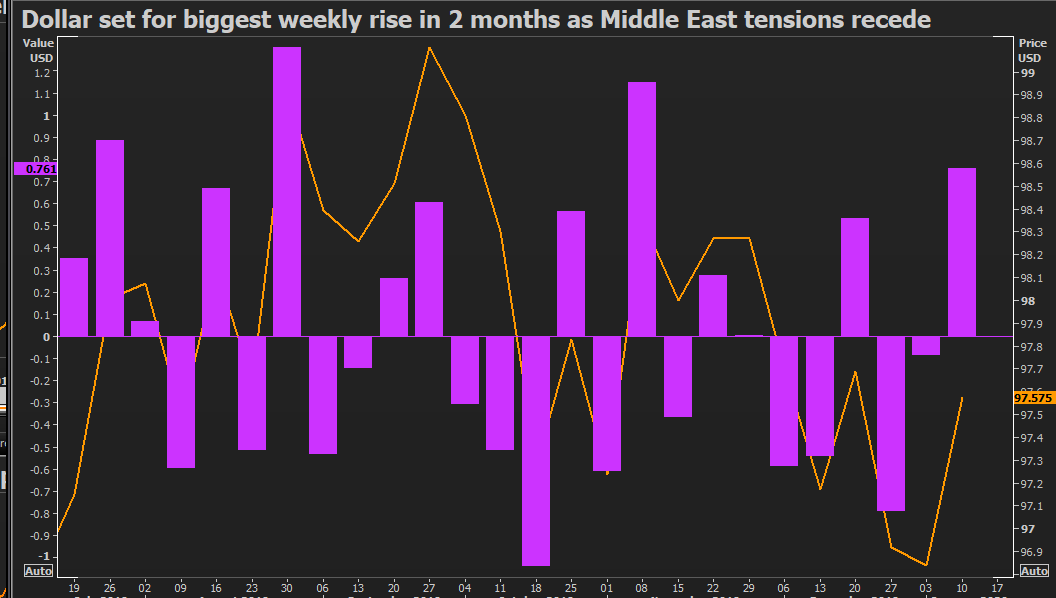 U.S. President Donald Trump, who announced last month that the Phase 1 trade deal with China would be signed on Jan. 15, said on Thursday the agreement could be signed “shortly thereafter”.

Hopes of a trade deal has also boosted the Chinese currency this week. The yuan climbed to a five-month high as the Jan. 15 date for signing the Sino-U.S. trade deal approached. It last traded up 0.1% at 6.9315 per dollar CNY=.

The Aussie AUD=D3 rose a third of a percent to $0.68755, although its gains were curbed on bets interest rates will be cut as early as February. Weeks of bushfires have cast a shadow over the broader economy. [AUD/]

The pound GBP=D3 weakened after a Bank of England policymaker said the British economy's response to Brexit developments in coming months will determine whether rates were cut further. It was down 0.1% against the dollar at $1.3054.