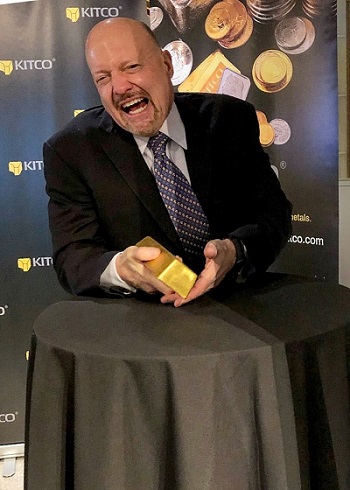 (Kitco News) The amount of gold buying happening in the new year points to the rising fear factor in the marketplace, says CNBC’s Jim Cramer, adding that gold might be heading towards $1,800 an ounce.

“When I see this endless buying for gold it makes me think for the first time people are just saying, ‘I’m really fearful,’” Cramer told CNBC last week.

When asked what caught his attention, Cramer replied: “Gold, gold, gold,” highlighting Agnico Eagle Mines as one of the few gold companies investors should be buying.

“It’s not just Treasuries. The gold buying has been endless … There are only a few growth gold companies. To name one — Agnico Eagle — that’s the one to buy,” Cramer said.

The latest bought of fear in financial markets is connected to the U.S.-Iran tensions.

"When I see this endless buying of gold, it makes me think that for the first time maybe people are just saying: ‘I am really fearful,’” he noted.

Last week gold prices surged to seven-year highs after Iran launched a missile strike near U.S. troops in Iraq. Since then, prices have retreated, settling around $1,550 an ounce level as upbeat risk sentiment not he market working against the precious metal.

Some other calls from Cramer in 2019 were that "everyone should own 10% of their money in gold" and that gold was heading to $1,500 an ounce.