LONDON (Reuters) - China’s yuan led a rally in trade-sensitive currencies on Monday while the Japanese yen dropped to a 7-1/2 month low as the imminent signing of a preliminary U.S.-China trade deal boosted sentiment.

The U.S.-China Phase 1 agreement, due to be signed at the White House on Wednesday, marks the first step towards ending a damaging 18-month trade dispute between the world’s two largest economies.

The turnaround in the yuan, which was at multi-year lows in September, reflects investors’ growing confidence that the worst of the trade war has passed.

Adam Cole, an analyst at RBC Capital Markets, said that in the absence of any significant announcements over the weekend “markets have defaulted to small risk-on moves”.

Some investors and analysts say the yuan is enjoying an unusual turn as a haven. 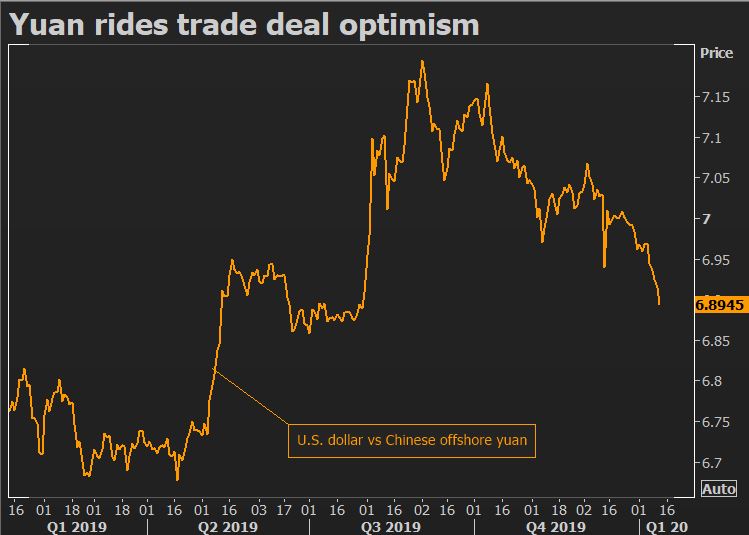 The Japanese yen weakened to its lowest since May.

The dollar rallied 0.4% to 109.93 yen. The greenback has surged 2.2% versus the safe-haven Japanese currency since the middle of last week, as fears of a major military confrontation between the United States and Iran gave way to a return to a rush to buy risk assets.

The yen also slid to an 8-month low against the trade-sensitive Korean won, although a holiday in Japan reduced overall trading volumes.

The Aussie, which has been hurt by worries about the economic damage of the country's ongoing bushfires, rose to hit a one-week high of $0.6919 before those gains fizzled, as did the New Zealand dollar's NZD=D3.

Currency markets elsewhere were quiet, with sterling the only big mover.

The pound dropped sharply after weak growth and industrial production data added to expectations of an interest rate cut this month.

On Sunday, another Bank of England policymaker, Gertjan Vlieghe, said he would vote for a rate cut this month unless economic data improved significantly.

Speculators have moved into a net long position in sterling, data shows, a stark contrast from the large short position they held a few months ago, making the pound vulnerable.

“The rise in GBP net longs suggests more downside risk to sterling if the Bank of England cuts rates,” ING analysts said in a note. 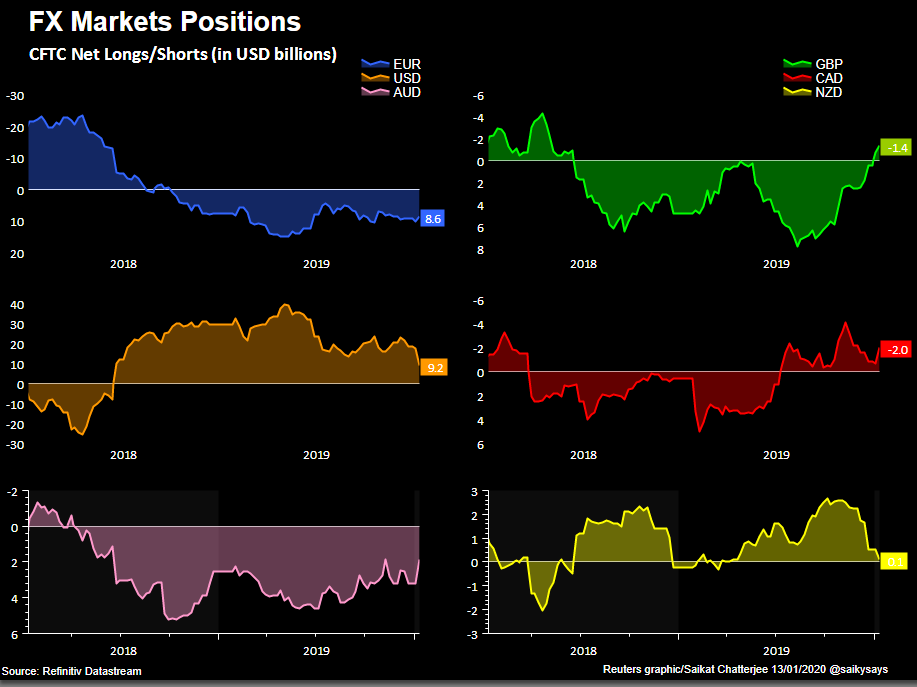 Euro/dollar continued to tread water at $1.1129, unchanged on the day.

Receding fears of conflict in the Middle East despite ongoing tensions centred on Iran have improved investors’ mood but this has meant little for the direction of the euro or dollar.

The dollar index, which measures the greenback against a basket of currencies, rose 0.1% to 97.493.

The Taiwanese dollar rose to its strongest in more than 18 months after the re-election of President Tsai Ing-wen at the weekend removed some uncertainty.