Research from the U.S. Federal Reserve and other top economists shows that U.S. tariffs on Chinese industrial components and materials, which largely won’t be lifted by the deal, are proving especially damaging to American manufacturing competitiveness and jobs.

The White House has scheduled a signing ceremony on Wednesday for what Trump is touting as “the greatest and biggest” trade deal ever made, with China expected to pledge to boost purchases of American exports by $200 billion over two years, including $80 billion more in manufactured goods, $32 billion more in farm products and $50 billion more in energy.

China also has promised to open its financial services market, improve protections for intellectual property and forbid the forced transfer of technology to Chinese companies. But Beijing has a history of pledging reforms that don’t happen, and many consider the purchase targets unrealistic.

The deal caps years of U.S. tensions with China that boiled over into a trade war 18 months ago, as Trump slapped new duties on $370 billion worth of goods from China. Beijing hit back with retaliatory tariffs on over $100 billion worth of U.S. exports.

The trade war's most immediate effect has been a drag on global economic output. The World Bank last week marked down its global growth forecasts here for 2020 and 2021 because of a slower-than-expected recovery in trade.

Early predictions that Trump’s tariffs could spark a U.S. recession have proven unfounded, in part because of the consumer-driven nature of the American economy. The Trump administration’s 2017 tax cut package and three Fed interest rate cuts in 2019 also helped stimulate activity.

The U.S. tariffs on China targeted industrial goods, components, semiconductors and machinery. Major tariffs on consumer goods such as cellphones, laptop computers and toys were scheduled to go into effect last month, but the Phase 1 deal suspended them indefinitely.

Aluminum, electric lighting, furniture, semiconductors and steel mills saw the most benefit from tariff protections, while companies that stamp, forge and otherwise process steel and aluminum into components and end-products suffered the most from higher input costs.

U.S. companies have paid $46 billion in tariffs since Trump, who has adopted an “America First” trade policy to revitalize the manufacturing sector, started restructuring relationships with Washington’s major trading partners.

Tariffs that will remain on goods from China after the Phase 1 trade deal are a big problem for the U.S. economy going forward, said Mary Lovely, a trade economist at Syracuse University in New York state.

“You’re taxing things that our businesses need to be competitive, and yet you’re saying the point of this is to support manufacturing,” Lovely said of Trump’s tariff actions. “But it does seem very clear now that the data is pointing in that direction, that these (tariffs) are having a negative effect on manufacturing.”

A new Fed paper here released on Dec. 23 analyzes the effect of all new tariffs imposed in 2018 and 2019, including global steel and aluminum duties, on the industries that are most exposed to the tariffs and those that benefit the most from them. It estimates that the tariffs caused more manufacturing job losses than were gained during those years.

“For manufacturing employment, a small boost from the import protection effects of tariffs is more than offset by larger drags from the effects of rising input costs and retaliatory tariffs,” Fed researchers Aaron Flaaen and Justin Pierce wrote.

U.S. tariffs on bicycles and components from China have prompted Arnold Kamler, chairman and chief executive officer of Kent International, an importer of Chinese-made bicycles sold at Walmart Inc and other big retailers, to lay off nearly 50 employees and shelve plans to start building bikes at home.

Trump’s tariffs on steel and other goods from China have cost the firm many millions of dollars, Kamler told Reuters, adding that these are not addressed in the Phase 1 deal.

As 2019 drew to a close, freight rail traffic, a key leading indicator of manufacturing, slowed dramatically. Total car loadings recently hit a record low, and were down by more than 30% from last year’s levels for the weeks beginning Dec. 30 and Jan. 6, according to the American Association of Railroads. 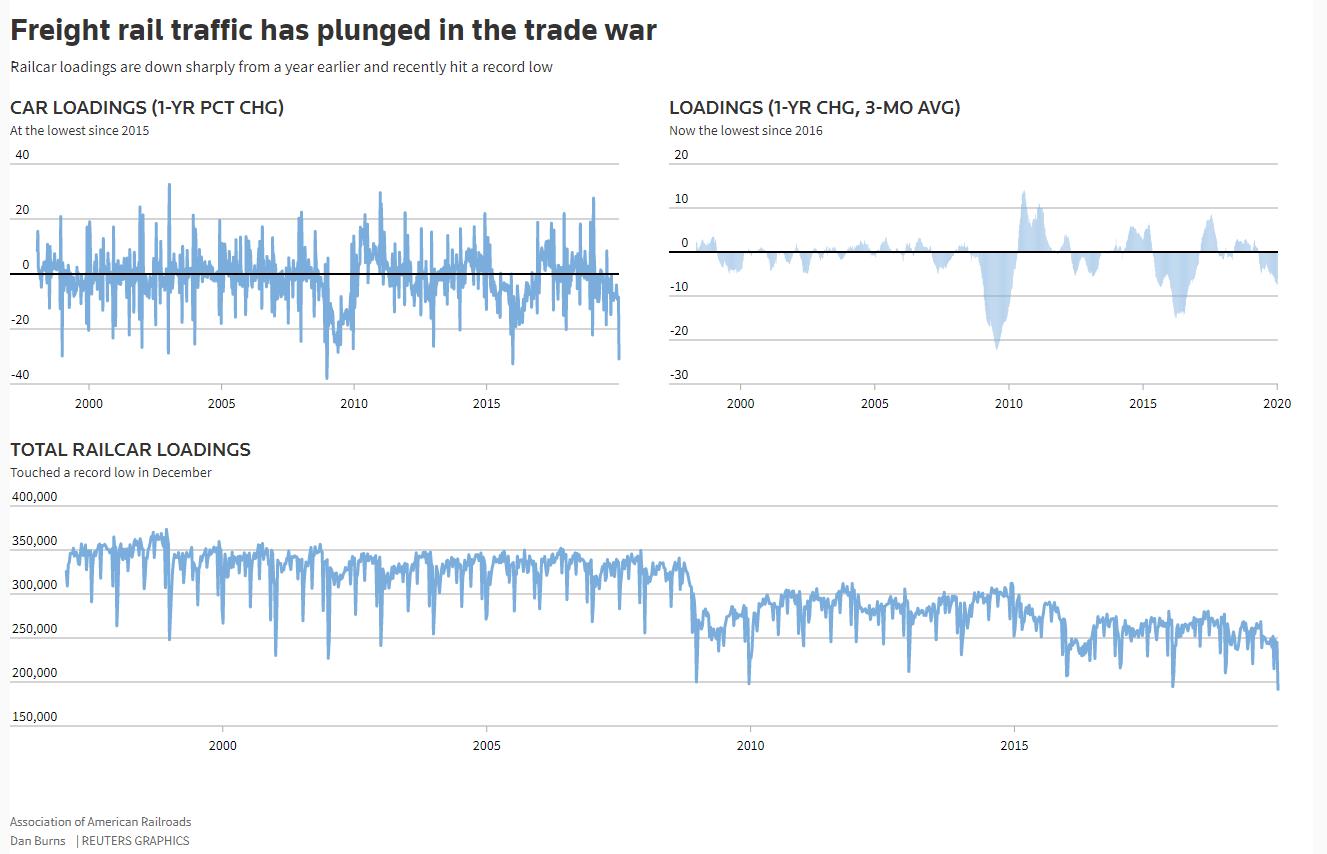 The less-volatile three-month average of the annual change is off by nearly 10%, a freight rail slowdown surpassed just one other time since the last financial crisis - during the 2015-2016 shale oil bust.

The manufacturing recession has been accompanied by a slowdown in U.S. goods exports, which have fallen 1% from 2018 levels due in part to retaliatory tariffs on U.S. goods.

Another study www.nber.org/papers/w26611 released last week by researchers from the Fed, the U.S. Census Bureau and the University of Michigan found that manufacturing firms paying the tariffs saw a bigger drop in exports, demonstrating that import duties play a role in exports.

Higher supply chain costs have cut exports by about 2% for products greatly exposed to tariffs on inputs, compared to exporters with no such exposure.

The study also found that Trump’s tariffs are affecting a wide swath of U.S. companies, with nearly a third now paying them on some 46.5% of their purchases.

These firms employ 32% of all private, non-farm employees in the country. Companies are trying to move supply chains out of China to avoid the tariffs, but this has proven costly, according to a poll taken by Cowen and Co. Doing so “can be complicated, expensive and disruptive to the business,” the company’s analysts said.

The deal being signed on Wednesday suspends Trump’s plans to levy tariffs in December on $156 billion in Chinese consumer goods, including cellphones, laptop computers and toys. It also halves the tariff rate to 7.5% on a $120 billion list of Chinese imports, from Bluetooth headphones and flat panel televisions to footwear.

But it leaves in place 25% tariffs on a $250 billion list of Chinese machinery and industrial components, including auto parts, semiconductors, printed circuit boards, furniture and lighting products.

Even if Trump’s remaining China tariffs go away in the coming months with a “Phase 2” agreement, U.S. exports may not recover.

American firms hit with Mexican and Canadian tariffs that ended last year are finding the market for their products doesn’t open back up after the trade war ends, noted Daniel Anthony, vice president of The Trade Partnership, a consultancy that recently crunched the data from the U.S. Commerce Department. 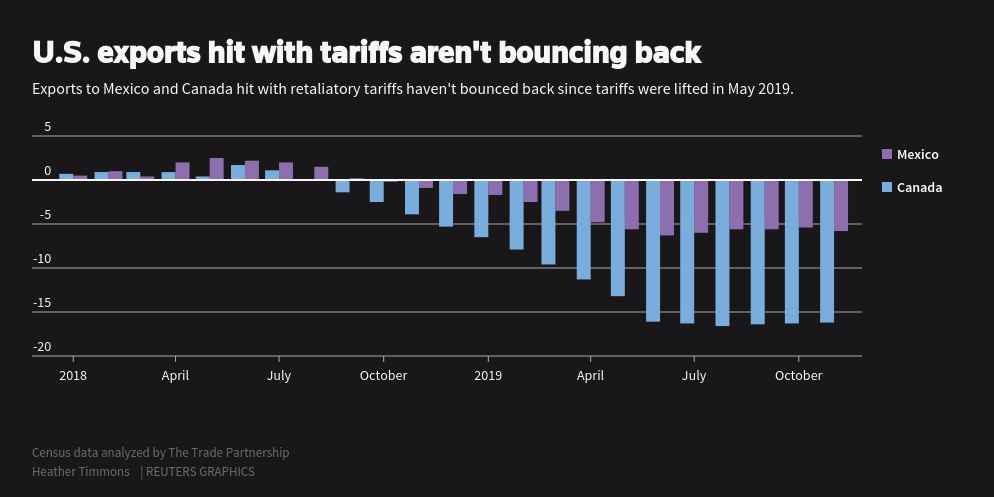 Mexico and Canada put retaliatory tariffs on more than $15 billion worth of U.S. goods, including bourbon whiskey, ketchup and apples after Trump slapped duties on their steel and aluminum exports.

Buyers of these U.S. goods may have found new suppliers overseas or at home, decided they didn’t need the product, or found demand for their product dried up, Anthony said.

As Trump prepares to sign the long-awaited deal with China, economists are likely to question whether the outcome was worth the cost.

“Was the hammer that was used really worth what we got out of it? Frankly, it looks like pretty small potatoes,” said Loverly, of Syracuse.