Euro perks to a one-week high before trade deal signing

LONDON (Reuters) - The euro climbed to a one-week high against the U.S. dollar on Wednesday as investors grew cautiously optimistic about the outlook for the single currency before the signing of a U.S.-China trade deal.

While the formal agreement will signal an end to months of tit-for-tat tariff hikes between the world’s two biggest economies that have hurt global growth, investors were cautious about buying riskier currencies broadly across the board.

“Markets are getting optimistic that the trade agreement will be a catalyst for further gains in currencies but the devil is in the details,” said Thu Lan Nguyen, a FX strategist at Commerzbank based in Frankfurt.

While major currencies spent most of the early London session pinned in tiny ranges, the euro EUR=EBS edged 0.2% higher at $1.1148, its highest level since Jan. 9.

One trader said the euro’s rise was also due to buying by a sovereign wealth fund.

The euro’s rise dragged the dollar lower with the greenback slipping 0.1% to 97.28.

Still, some investors don’t think the formal agreement will end the trade dispute.

“I don’t think the market is fully convinced about a closure on the trade conflict front as the issue has caused a lot of damage to the world economy,” said Neil Mellor, a senior FX strategist at BNY Mellon in London.

U.S. President Donald Trump is slated to sign the Phase 1 trade agreement with Chinese Vice Premier Liu He at the White House at 1630 GMT. 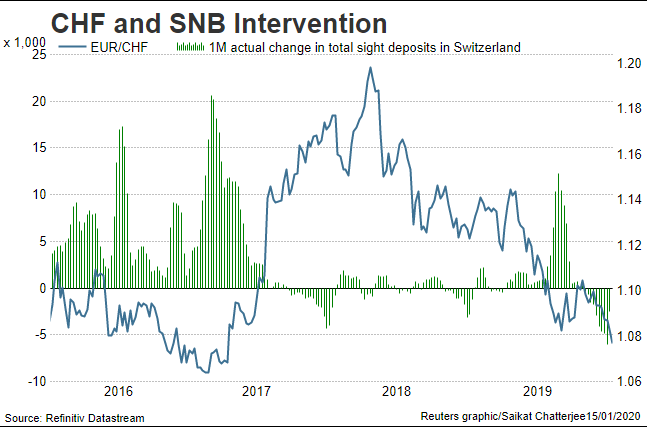 The Swiss franc reversed most of its earlier gains against the euro EURCHF=EBS with the currency trading flat at 1.0764 francs per euro.

The franc had hit its strongest level against the euro in almost three years on Tuesday after the United States added Switzerland to its watchlist of currency manipulators.

Analysts said the inclusion could discourage the Swiss National Bank (SNB) from intervening to try to limit further appreciation of the franc, although the Swiss finance ministry said it would have no immediate consequences.

Elsewhere, the Swedish crown weakened against the greenback after latest inflation in Sweden held at 1.7% in December, supporting the central bank’s forecast that rates would remain unchanged for the foreseeable future after it raised rates a quarter-point, to zero percent, at its most recent meeting.

The Swedish crown SEK=D3 weakened a third of a percent at 9.46 crowns per dollar.