(Kitco News) The Perth Mint in Australia saw a surge in gold coin sales at the end of 2019, and it turns out Germany was behind most of those purchases, which hit the highest levels in more than three years in December.

Gold coin and minted gold bar sales from December showed a 45% uptick compared to the previous month. There was a total of 78,912 ounces of gold coins and minted bars sold in December, marking the highest monthly increase since October 2016, The Perth Mint said last week. The year-over-year comparison shows that sales were up 170%. 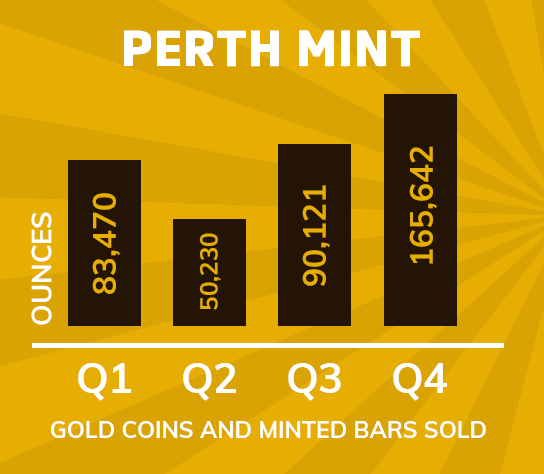 Germany played a big role in getting to these totals, contributing to most of the monthly increase, Neil Vance, Group Manager Minted Products at The Perth Mint, told Kitco News on Wednesday.

“We were happily surprised by the numbers in December. Just bear in mind, most of these sales have actually gone into Germany,” Vance said.

One of the reasons for surging demand out of Germany is investors’ worries about future economic growth, Vance pointed out. “There are some underlying issues in the German economy … Germany technically avoided a recession by 0.1% after having a negative Q2.”

Recession is defined by two consecutive quarters of contracting growth. In Q2, Germany reported a contraction of 0.2%, followed by a 0.1% growth in Q3.

The latest numbers out of Germany showed that the economy grew 0.6% in 2019, marking the weakest expansion since 2013, according to Destatis, the country’s federal statistics office. “Growth lost momentum in 2019,” Destatis said. “Growth in 2019 was mainly supported by consumption expenditure.”

And even though The Perth Mint has been doing marketing campaigns, targeting Germany specifically, Vance said that better sales are a reflection of investors’ economic and geopolitical concerns.

“It really is more to economic and geopolitical factors more than the marketing,” he said. “A lot of people don’t realize that Germany has been quite affected by the trade war. They are quite a large exporter themselves and their economy really has suffered.”

The German market has traditionally been very strong for The Perth Mint. “Germany and the U.S. are our two largest coin markets,” Vance described. “We’ve got a very strong presence in the German market. We’ve done a lot of marketing over the years, branding our Kangaroo coins. Our Lunar coins are very popular there as well. “Germany has a strong history of owning gold and silver coins.”

Another factor boosting gold buying in Germany is a new law that came into effect on January 10, which limits the anonymous gold purchase buying from EUR €10,000 to EUR €2,000. “That may explain part of the reason why December was quite large,” Vance said.

German gold buyers who purchase above that limit are now required to show IDs, and precious metal dealers are required to do criminal background checks for businesses.

“If a dealer suspects, he must report his potential customer to the authorities. If a trader fails to adequately comply with these obligations, he may face severe fines,” German Finanzen100 reported.

This is not the first time such a law was implemented. Just two years ago, the anonymous buying limit was at EUR €15,000.

Looking ahead, The Perth Mint’s January sales are also looking very strong, said Vance, citing demand for the Lunar coins ahead of the Chinese New Year, which takes place in late January.

“People are buying up for that period … We expect a very good January. We got a lot of orders in the system. And that really comes on the back of not only the economic situation in Germany but also the issues in the Middle East. Even in Australian dollars, gold is at record levels. It spiked above AUD $2,350, which is really unbelievable,” Vance said.