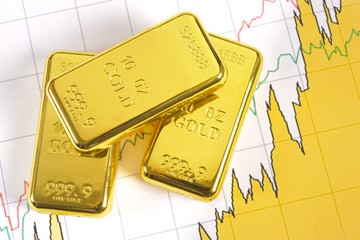 Among mining stocks, the bank looks for the best performers to be companies that can generate free cash flow and return capital to shareholders.

Despite near-term optimism about global stocks by investors, Credit Suisse said it anticipates a mostly “risk-off skew” due to continued uncertainty about the U.S.-China trade war, Brexit, and lingering fears of a global economic slowdown or recession.

“This uncertainty is leading to most central banks around the world cutting rates, which is supportive of gold prices (lower yields lead to higher gold),” Credit Suisse said. “In the U.S., the Fed has indicated a pause in rate cuts, but this stance could change quickly, as we saw last year, if economic fundamentals weaken.”

The risks to strong gold prices, analysts said, would be if central bankers around the globe pause on rate cuts and if historically high speculative bullish positions begin to reverse.

The bank said gold fared well in 2019 due to low or negative bond yields, as well as central-bank buying as countries diversified away from the U.S. dollar.

“Currently over ~US$10 trillion worth of bonds globally are negative-yielding,” Credit Suisse said. “Low/negative yields support gold prices as the opportunity cost for holding gold diminishes and gold screens as a more attractive safe-haven asset.

“Central banks have been net buyers of gold for 10 consecutive years, and Asian central banks still have very low gold holdings, which could mean countries like China continue to switch Treasury holdings into gold.”

Meanwhile, in the mining sector, analysts said they expect the best-performing gold stocks in 2020 to be those for companies that can generate meaningful free cash flow (FCF) at current gold prices and return capital to shareholders through increased dividends and buybacks. Investors have become wary of companies that try to grow through acquisitions, Credit Suisse said.

“Keeping with the quality and FCF theme, our top picks are Agnico Eagle, Newmont, and Endeavour Mining, as these companies are poised to generate significant FCF in 2020 and return capital to shareholders, and have lower financial/operational risk vs. peers,” Credit Suisse said.