(Kitco News) Palladium has posted the highest price per ounce ever of the four main precious metals, with analysts citing a tightening market with strong demand for use in catalytic converters.

And, some say, there could be still more upside since the rally appears to be driven by supply-demand fundamentals rather than excessive speculation in the futures market.

Commerzbank analyst Daniel Briesemann pointed out that the metal was up nearly 6% for a while Thursday, surging to a new record high of just shy of $2,400 per troy ounce. According to one price vendor, palladium peaked at $2,373 Thursday and $2,376.80 early Friday.

“As such, it also exceeded the all-time high that platinum had achieved in March 2008,” Briesemann said. “Palladium is now more expensive than platinum ever was, in other words. It had already surpassed gold’s record high back in mid-December. This latest rise makes palladium the most valuable of the four exchange-traded precious metals.” 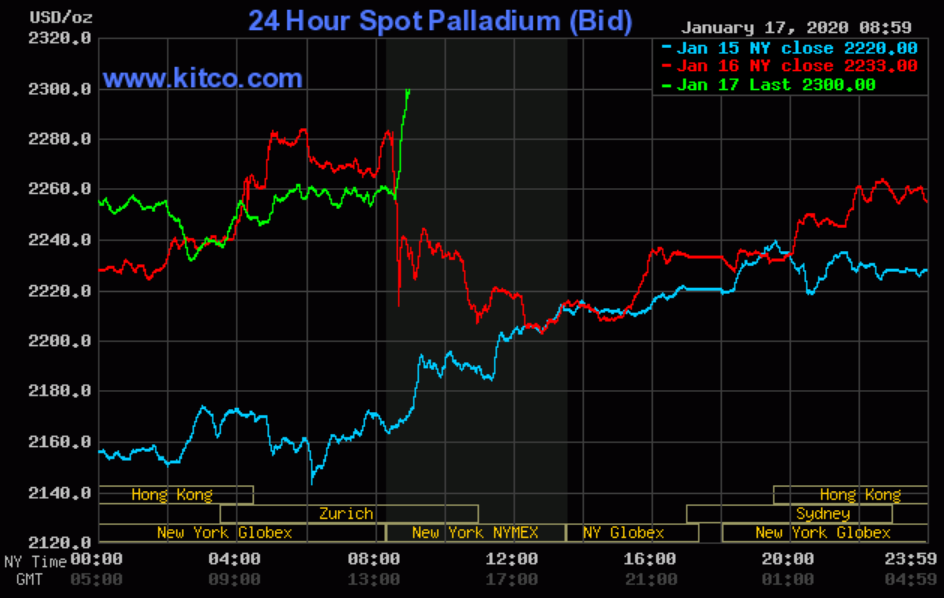 There was no fresh news to justify the most recent leg higher other than good European Union new car registration figures, Briesemann said.

“It seems that palladium is still being driven up by concerns about an ongoing shortage of supply,” Briesemann said. “This is also reflected in the lease rates, which have risen in recent weeks. This makes it more difficult for palladium consumers to obtain the material they need.”

A TD Securities research note Thursday suggested potential for more gains by the metal, citing tightening emissions-control regulations in a number of nations. These mean more loadings of platinum group metals, such as palladium, in each motor vehicle.

“A potential rebound in auto sales, after one of the most prolonged periods of contraction on record, could also drive demand higher,” TDS said.

Further, analysts said there are supply risks due to factors such power outages in key producer South African, along with a general unavailability of inventory.

“Given the improved demand outlook, the chronic deficit is likely to get worse and make it difficult for the market to clear at lower prices,” TDS said.

ING also cited a tightening physical market, pointing to news that South Africa reported that its mine output of PGMs dropped sharply by 13.5% year-over-year in November, a time when electricity supply woes resurfaced in the country.

“Further weakness in mining production can’t be ruled out,” ING said. “While higher prices should be encouraging miners to look to boost output, palladium is largely produced as a by-product, making supply more inelastic.”

Meanwhile, ING said, exchange-traded-fund investors have turned from being a net supplier of the metal to net buyers in recent months, further tightening the market.

“We see little evidence of excesses in spec activity, which suggests the rally is fundamentally driven, despite the parabolic move,” said TDS. “In fact, our dry-powder analysis suggests that traders hold a below-average total position, and positions per trader are also below average, thereby reducing the risk of a sharp reversal.

“We think the rally has room to run, as periods of extreme scarcity send prices sharply higher. No substitutes imply that near-term demand will not be destroyed,” TDS added.