Look ma, 18-carat gold jewelry made with plastic, not metal 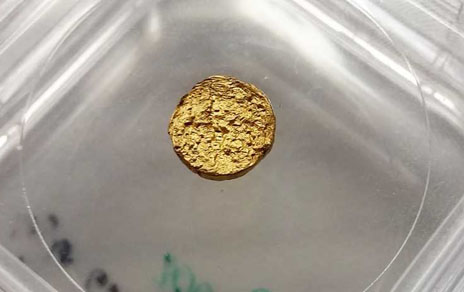 (Kitco News) - Scientists have discovered a method to create 18-carat gold using a mixture of protein fibers and a polymer latex instead of a conventional recipe of gold and base metals, according to research published earlier this month.

The substance, a type of gold foam, has the same toughness, strength and heat resistance as regular 18-karat gold, but is much lighter due to the use of plastics instead of metal. The gold also contains tiny air pockets, which are invisible to the naked eye. The scientists said the substance could be used in watches, jewelry, radiation shielding, catalysis, and electronics.

Hag set out to create a new form of gold that weighs about five to ten times less than traditional 18-carat gold. The gold's final density is just 1.7 g/cm3.

To create the new form of gold, researchers said they combined the gold with the protein fibers and a polymer latex. Water is used to create a dispersion. Alcohol replaces the water to turn the dispersion into a gel. The alcohol gel is then put into a pressure chamber and pumped with CO2 which enables the miscibility of the alcohol. Peter Rüegg, in charge of corporate communications at ETH, said heat can then be further applied afterwards to anneal the plastic polymers, thus transforming the material and compacting into the final desired shape, yet preserving the 18-carat composition

“This gold has the material properties of a plastic,” Mezzenga said in a news release announcing the findings. If you dropped a coin-shaped disc of the material on a table, he said it would sound like a plastic button. “As a general rule, our approach lets us create almost any kind of gold we choose, in line with the desired properties.”

Other modifications are possible. The liquification temperature can be specified. Rüegg also writes that the shape of the gold nanoparticle can change the material’s color: “nanoplatelets” produce gold’s typical shimmer, while spherical nanoparticles of gold can lend the material a violet hue.

Outside of jewelry, researchers said the material is also suitable for chemical catalysis, electronics applications or radiation shielding.

The researchers have applied for patents for both the process and the material.