BANGKOK (Reuters) - Thailand’s economy likely slowed in the last quarter of 2019 as exports were hit by trade tensions, while full-year growth may have eased to the weakest in five years, a Reuters poll showed.

The trade-reliant economy has been buffeted by the Sino-U.S. trade war, soft domestic demand, a delayed fiscal budget and drought. Tourism, which was a bright spot, is being hit by the coronavirus outbreak.

Southeast Asia’s second-largest economy was forecast to have expanded 2.1% in the fourth quarter from a year earlier, according to the poll’s median of 12 economists.

That would be the slowest pace since 2014’s third quarter of 1.1%, and compared with the 2.4% rate in the previous quarter.

On a quarterly basis, gross domestic product (GDP) likely grew a seasonally adjusted 0.4% in the December quarter, up from the previous period’s 0.1% pace.

The poll predicted growth will pick up slightly to 2.5% in 2020, but several analysts have said they will be cutting their forecasts after the release of 2019 growth figures.

“The economy remains fragile, said Thammarat Kittisiripat, economists of Tisco Group. “The first half, particularly the current quarter, will be bad,” he added.

On Thursday, senior central bank director Don Nakornthab said the economy might expand less than 2% this year, with first-quarter growth seen below 1%, due mainly to the virus outbreak. 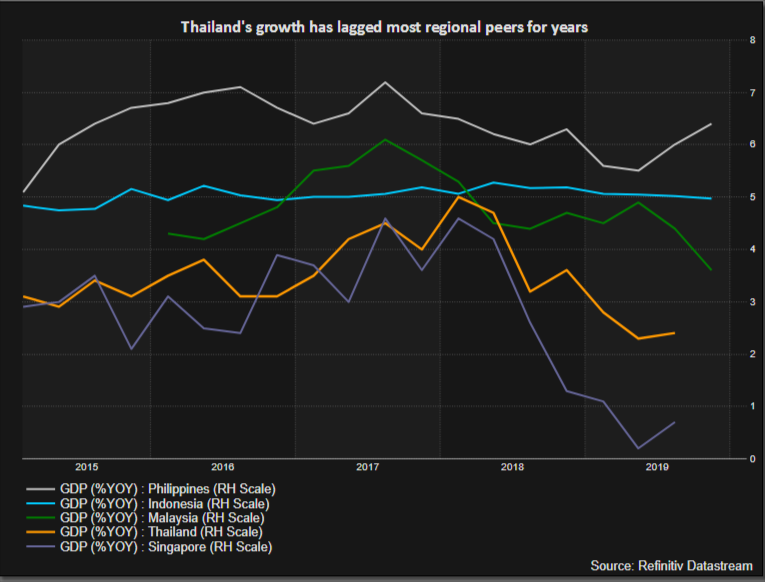 Thailand could lose as much as 500 billion baht ($16.05 billion) in tourism revenue if there are no measures to help the sector, according to the Tourism Authority of Thailand. Spending by foreign tourists accounted for 11% of GDP last year.

Parliament passed the delayed 3.2 trillion baht budget bill for the current fiscal year on Thursday, although it is still subject to approval from the senate and must have the king’s endorsement before coming into effect.

Earlier this month, the BOT cut its policy rate THCBIR=ECI to a record low of 1%, and Governor Veerathai Santiprabhob said there was room to help growth if needed.

In November, the National Economic and Social Development Council, which compiles GDP data, forecast 2.6% growth for 2019 and 2.7%-3.7% for this year. It gives new projections on Monday.

Fatality at Harmony Gold's Kusasalethu Mine