Palladium prices up 8% on the day, looking at new record highs on deficit concerns 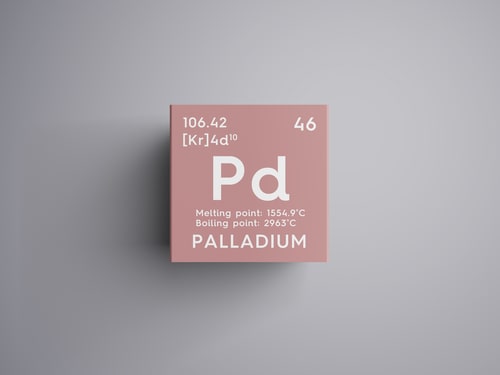 (Kitco News) The precious metals sector is rallying across the board, but palladium’s surge is blowing gold, silver, and platinum out of the water.

March palladium futures were up nearly 8.1% on the day, last trading at $2,504.70 an ounce as the supply-demand outlook continued to boost prices to new highs. Spot prices hit record highs of 2,590 an ounce earlier in the session.

“At the start of the year, we were looking for upside risk for the palladium market, but prices have rallied further than we thought they would. Given how tight the market is, it is likely that we are going to continue to see further upside risk,” Standard Chartered precious metals analyst Suki Cooper told Kitco News on Tuesday.

Prices are likely to continue to climb with any price dips looking to be short-lived, Cooper added.

The critical factor to watch going forward, especially with the coronavirus economic fallout on everyone’s mind, is whether there is a slowdown in auto production-led palladium buying, the analyst noted. The precious metal is widely used in catalytic converters by the car industry.

“Palladium rally has been led by industrial demand rather than investment demand,” Cooper pointed out.

The supply-demand fundamentals still point to a supply deficit this year. “Even though there are concerns that factories have been closed and there is a drop in auto production, it still doesn’t look like the potential decline of palladium demand will be enough to swing the market deficit. The market is still likely to be undersupplied for this year,” she said.

“The palladium market deficit widened to over 1 million ounces in 2019, as combined primary and secondary supplies grew only modestly, while auto-catalyst demand surged higher on the back of new [emissions] legislation in China and more stringent testing regimes in Europe,” Johnson Matthey said. “The palladium deficit is likely to deepen in 2020, as an increasing number of Chinese and European vehicles meet China 6 and Euro 6d legislation, respectively.”

“[Widening deficit] will depend on how the auto industry performs this year, and at the moment, it is not looking that constructive. Last week China Passenger Car Association (CPCA) estimated that car sales could drop by more than 30% MoM in February, after posting its biggest decline of 22% MoM in January,” the analysts wrote on Tuesday.

Some analysts are still projecting a move lower in palladium. Commerzbank head of commodity research Eugen Weinberg said he expects a correction soon.

“[Higher prices] can be only partly explained by the ongoing production problems in South Africa due to power supply disruptions and this year’s renewed high supply deficit,” Weinberg said. “As we see it, the fact that market participants are focusing on the problems on the supply side means that they are ignoring the risks to demand, which are at least equally as important.”

It all comes down to car output for 2020, he added. “Increased risk aversion on the financial markets, a strong U.S. dollar and significantly lower new-car registration figures in China and Europa point to a price correction,” Weinberg said.

On the supply side, things are not looking to improve significantly until 2023, Cooper said.

“We did an analysis looking at supply outlook was in South Africa. In the near term, it doesn’t look like there is much room for growth opportunities in terms of palladium output. Many of the projects are more likely to yield increase in output around 2023,” she said.

In Russia, which is the world’s largest producer, the situation is similar. “We are looking at a timeframe of at least three years,” Cooper noted. “It is more likely that we are going to see output stabilizing at best but more likely declining this year.”