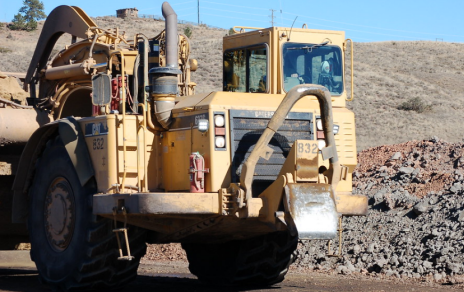 (Kitco News) - Teranga Gold Corp. (TSX: TGZ) Friday reported an adjusted loss in the fourth quarter but noted that revenues would have been much higher, except some $31 million ounces of gold were still unsold at year-end due to an earlier-than-normal cut-off for shipments.

Otherwise, production in the quarter rose 54% year-on-year to a record 91,411 ounces, Teranga said.

The company listed an adjusted net loss of $6.3 million, or six cents per share, compared to an adjusted profit of $1.2 million, or a penny, in the same period a year earlier.

Revenue grew 40% to $106.3 million due to higher gold sales with the addition of the company’s second mine, Wahgnion, and higher prices, Teranga said. The average realized gold price rose 20% from a year earlier to $1,479 an ounce. Still, both revenue and the profit were held back in the quarter with just over 20,000 ounces of gold inventory still unsold at year-end, valued at $31 million when using the year-end spot gold price, Teranga said.

Teranga said costs per ounce sold rose in the fourth quarter, but said this was largely the result of the large amount of unsold gold at year-end. “Had the gold bullion inventory been sold before year-end, the various cost-per-ounce metrics would have been in line with the prior year,” the company said. All-in sustaining costs rose 15% to $1,080 an ounce.

As a result of the record fourth-quarter output, the company achieved its fourth straight annual production record with 288,768 ounces of gold. Teranga said this exceeded the top end of the production guidance range of 245,000 to 270,000 ounces. AISC for the full year were $917 an ounce, near the low end of guidance.

“Our second gold mine – Wahgnion – is now in commercial production, and we are preparing to complete our transformational acquisition of Massawa, a high-grade, top-tier asset that neighbors our Sabodala mine in Senegal,” said Richard Young, president and chief executive officer. “With the advancements made in 2019, the course is set for an exciting year ahead as we start repositioning Teranga as a low cost, mid-tier gold producer.”

Construction of Wahgnion was completed ahead of schedule and some $15 million under budget, with commercial production declared effective Nov. 1, the company said. Teranga is in the process of acquiring the Massawa gold project, with the deal expected to close in the first quarter and production to begin in the second half of the year.

Teranga projected consolidated production will rise to 345,000 to 355,000 ounces in 2020, excluding any output from the Massawa high-grade Sofia deposit. Teranga said its 2020 production and cost guidance will be updated in the third quarter to incorporate mining and processing ore from Sofia.