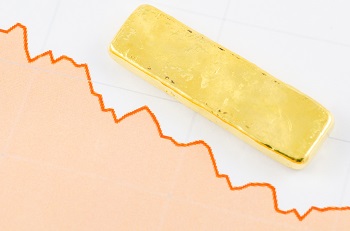 (Kitco News) - Traders and investors are using gold like an ATM machine as the week winds down, selling to generate cash as they book profits or need to raise money to meet margin calls and offset losses in other markets.

The U.S. stock market is weaker again on Friday, continuing a dramatic week-long sell-off on worries about the damage the coronavirus outbreak will do to the global economy. Technology giants Apple Inc. and Microsoft have both issued sales warnings for the first quarter due to the impact of the virus.

Normally, that helps gold as investors turn to the yellow metal as a safe haven at times of risk-off sentiment in other markets. That’s exactly what happened on Monday when gold prices soared to a seven-year high.

Some market participants are selling to their gold positions because they “need to be in cash, for now, to meet margin calls elsewhere,” said George Gero, managing director with RBC Wealth Management.

“Despite the turmoil in markets, and the worst week for equity markets since the financial crisis, gold and its precious-metal peers have joined the selling party,” said a research note from TD Securities. “We believe this is due to extremely stretched positioning, as both the number of long positions and the number of traders long [bullish] are at record levels, which elevated the risk of a meaningful pullback off the highs. Further, as observed in previous episodes of market turmoil, gold will often be sold to generate liquidity and cover margins.”

As of the last Commodity Futures Trading Commission report through Feb. 18, money managers had a net-bullish position of 238,546 futures contracts, which was a week-on-week increase of 22%. Whenever any commodity market becomes heavily long or short, this is often seen as a harbinger of a potential market correction the other way since much of the potential buying or selling has already occurred.

Commerzbank analyst Daniel Briesemann characterized the price decline as “forced selling.” He pointed out that the Dow Jones Industrial Average Thursday posted its biggest one-day point loss ever, yields on Treasury notes continue to fall and other risk assets such as oil are also weak.

“One might imagine that there would be robust demand for gold in this environment, yet precisely the opposite is true this morning…,” he said. “We attribute this to forced selling aimed at offsetting losses elsewhere and covering so-called margin calls. The emerging speculations of interest-rate cuts are lending no support to gold.”

Sean Lusk, co-director of commercial hedging with Walsh Trading, cited a combination of normal profit-taking in gold after the recent seven-year highs, along with traders getting “margined out” of markets.

“There is a run out of positions,” he said. “Everyone is going to cash….they are sitting on the sidelines until more is known [about the coronavirus]. It doesn’t matter what asset class.”

Jim Wyckoff, senior technical analyst with Kitco, explained that the nature of futures trading is working against the gold market now that prices are falling. Futures markets are highly leveraged, meaning traders put up a margin call (sort of like a down payment) that is a small percentage of the total value of the commodity in any futures contract.

“That can be both good and bad for a speculative trader,” he said. “When the futures markets’ price goes the trader’s way, he or she can make a lot of money in a hurry. However, when a futures market turns against a trader, the consequences can be devastating.”

Thus, Wyckoff explained, one likely scenario playing out this week is some traders established bullish positions in gold, thinking this was a “no-brainer” as stocks sold off. But when gold turned south, these traders were suddenly forced to exit their positions on “weak long liquidation,” thus exacerbating the overall selling.

Like others, Wyckoff also cited selling of gold to meet margin calls.

“When markets get volatile and price moves are bigger and faster, margin calls in futures markets can come, forcing a trader to come up with cash or liquidate his losing position,” Wyckoff said. “That’s when the old trading adage comes in: when markets get wild and trader tensions are high, you don’t sell what you want, you sell what you can. Gold was likely a victim of this scenario this week.”

As the market retreated, sell stops were triggered this week, said Daniel Pavilonis, senior commodities broker with RJO Futures. These are pre-placed orders activated when certain charts points are hit.

Charlie Nedoss, senior market strategist with LaSalle Futures Group, suggested just maybe China has sold some gold due to a need for cash. Usually, when prices sell off, there might be market rumors of which hedge funds are exiting. But in the current environment, Nedoss said he has not heard the normal rumors.

Lusk pointed out that physical demand has been soft with a slowdown in buying in China, the world’s largest gold-consuming nation. He also pointed out that there tends to be a seasonal lull in the gold market for a while after the Chinese New Year. 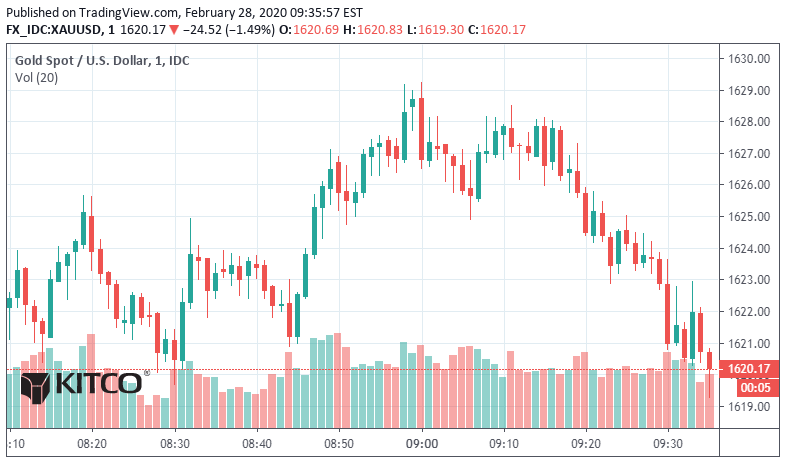 Gold remains 5% higher for the year-end

Still, Lusk said gold has “overall performed pretty well” so far in 2020. The most-active Comex April futures contract is still up by 4% for the year to date.

As a result of the recent weakness, Gero commented that many investors may well want to buy gold again to take advantage of lower prices to build longer-term holdings.

“BMO rates strategists are flagging the possibility of a 50bps [50-basis-points] reduction in the Fed funds rate in one move at some point in H1 2020 and U.S. 10-year yields falling towards 1%, depending on how the situation evolves,” the Canadian bank said in a research note. “This would create an environment for further gold and silver price appreciation.”