LONDON (Reuters) - The dollar fell 3% against the Japanese yen and commodity-linked currencies tanked on Monday, as a 30% crash in oil prices and tumbling stock markets panicked investors and sent currency prices swinging wildly.

A gauge of volatility in the euro/dollar market - the world’s most-traded currency pair - shot to its highest since April 2017 as the euro surged more than 1% to its strongest since January 2019.

Dollar-yen one-month implied volatility surged to an 11-year high at more than 18% JPY1MO=FN as the dollar slid to its weakest since 2016.

Investors are dumping dollars because of the collapse in U.S. Treasury yields. The benchmark yield is at 0.45% US10YT=RR, after trading above 1% last week, as traders shed risky assets and head for the safety of government bond markets.

That unnerved investors already rattled by more than a weak of wild moves in markets, as they struggled to assess the economic damage caused by the coronavirus.

“Financial markets have suffered a rude awakening to notions that volatility was a thing of the past. We’re now seeing the kind of market dislocation not witnessed since the 2008-09 global financial crisis,” ING analysts said, describing the set-up as a “perfect storm” for currency markets.

“This all conspires to deliver an extreme flight to safety, into the likes of the JPY and the CHF,” they wrote. 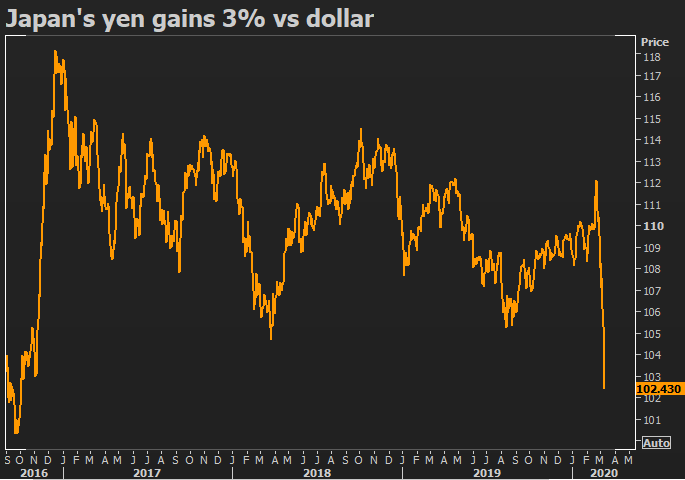 The dollar index dropped to its weakest since September 2018 before recovering somewhat to trade at 95.132, down 0.3% =USD.

The Swiss franc added more than 1% against the dollar CHF=EBS but was flat versus the euro EURCHF=EBS.

The biggest moves were in currencies linked to oil prices.

The Australian AUD=D3 and New Zealand NZD=D3 dollars fell nearly 2% before bouncing back.

“For growth-sensitive and for oil-sensitive currencies, it’s far too early to pick a bottom,” said Kit Juckes, a strategist at Societe Generale, predicting that the Norwegian crown and Canadian dollars would get weaker.

“USD/JPY will be a source of concern to the Japanese authorities, who have as little interest in a stronger currency as anyone else, but USD/JPY 100 will break eventually. Japan’s net international investment position is just too healthy.”

The yen is headed for its largest three-day gain since the 2008 financial crisis. It is up around 9% in a dozen trading days.

The gain is bad news for exporters and has raised concerns among policymakers in Japan. A senior finance official warned that authorities were closely watching trade.

In times of low volatility - and currency market volatility has been at or near record lows for several years - investors borrow heavily in low- or negative-yielding currencies like the euro and yen to buy higher-yielding FX elsewhere.