Up and down: gold caught in crosscurrents 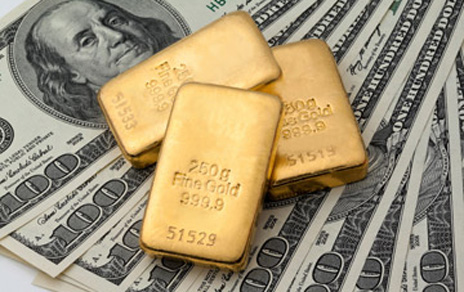 (Kitco News) - Gold has been caught in strong crosscurrents on a volatile Monday so far due to so-called risk markets. The metal initially hit its strongest level in more than seven years as stocks sold off, but then got hit with profit-taking, particularly as some investors needed to raise cash to offset losses elsewhere, analysts said.

Spot gold gold surged above $1,700 an ounce overnight for the first time since late 2012 as U.S. stock-index futures hit a limit-down move and overseas equity markets fell sharply. The U.S. Treasury 10-year yield fell to a record low as market participants continued to fret over the coronavirus outbreak driving the U.S. into recession, as well as an oil-price war between OPEC and Russia.

“[Gold prices] were up initially on a risk-aversion surge,” said Phil Flynn, senior market analyst with at Price Futures Group.

But then the metal fell back, with several analysts citing profit-taking as the reason for the move. Plus, as was the case one-and-half weeks ago when gold was falling with equities, analysts said some market participants were selling gold positions to raise money for margin calls and/or offset losses in other markets.

“A lot of people are getting hit with margin issues,” said Daniel Pavilonis, senior commodities broker with RJO Futures. “They are being forced to sell something that is profitable.”

Thus, gold is one of the assets they are selling. Flynn likened the situation to playing the board game Monopoly and landing on the space for Boardwalk when another competitor has a hotel or bunch of houses on it, meaning whoever lands there has to pay a ton of rent – which may be more than he or she has in free cash at the moment.

“You have to sell everything to pay the rent,” Flynn said.

John Weyer, co-director of commercial hedging with Walsh Trading, added: “If you’re getting squeezed out of equities and energies, you just don’t have enough margin to come in and be a buyer of gold right now. There’s a little bit of account management going on.”

Some of the pullback in gold from the highs might also be speculation that decision-makers will yet again step in to try to prop up the economy and financial markets, Pavilonis said. He cited reports that the White House is trying to develop some type of “game plan,” and there is talk of Federal Reserve action as well.

Further, as the metal eased, some traders may have decided: “Let’s take our profit and see what happens here,” Pavilonis said.

Some traders might also be hesitant about buying at the highest price in several years, Weyer added.

“There might be some price sensitivity going on, where somebody says, ‘I’d like to be a buyer, but I don’t know if I want to be a buyer at $1,700.’” Weyer explained.

However, gold has bounced from its lows as equities continued their plunge after Wall Street opened. And even if stocks tank again and pull gold down with it, Flynn figures the gold market will still outperform the equity market due to the metal’s role as a safe haven.

TD Securities, in a research note, commented that even though prices backed down from the highs and a “near-term rush to liquidity remains a risk,” gold positioning is becoming “stickier at higher levels” on expectations for more rate cuts around the world.

This means “the precious-metals rally is here to stay,” TDS said. Lower interest rates tend to encourage buying of a non-yielding asset such as gold since investors are not losing as much interest earnings by holding gold instead.

“This is adding pressure on the dollar as the euro continues to strengthen in response — in this lens, the anti-dollar theme is also emerging as a viable near-term theme driving gold prices,” TDS said.

Pavolonis added: “I’m ultimately bullish” on gold. However, he said, there is likely to be a lot of volatility and big ranges in financial markets for a while.

“That is going to create volatility in gold where you see these sell-offs, and then they get bought up again,” he said.