Breaking it down: What markets turmoil means for raw commodities, incl. metals

(Kitco News) - In just a few short weeks the coronavirus, or Covid-19, outbreak has dramatically altered the global markets and economic landscape. This week a second market shock struck an already-shaken world marketplace when crude oil prices crashed and sent the raw commodity sector into a steeper tailspin. Less than three months into 2020, these unexpected developments will have ramifications for commodity markets, including the precious metals, that will linger at least into the end of the year.

Less than a month ago the U.S. stock market was basking in a bull run that had been in place for over 10 years, with the major stock indexes hitting record highs in February. At that time the major concern and topic of discussion in market circles was the just-completed U.S.-China partial trade deal that was expected to jumpstart global economic growth.

Fast-forward just four weeks: The combination of the Covid-19 outbreak and sharply lower crude oil prices has many analysts and economists forecasting the odds of a global economic recession are 50-50, or higher. Many commodity markets have responded to the worries about reduced global demand by plumbing fresh multi-month price lows—when many of those markets had already been depressed the past year. The outlier is gold, which on Monday notched a seven-year high on strong safe-haven demand.

Following are key developments the past few weeks and their likely impacts on commodity markets in the coming weeks and months, or even longer.

Trader/investor fear and anxiety at present are keeping raw commodity futures bulls on the sidelines. Such will limit any upside in overall commodity market prices in the near term. However, the anxiety will support the safe-haven gold market, and possibly silver, too. Markets price history shows that unexpected fundamental shocks, such as the coronavirus scare, see traders factor into market prices a worst-case scenario not long after the shock occurs. “When in doubt, get out,” is the mantra of many traders during such scenarios—especially those on the long side of commodity markets. This is due to the keen uncertainty that is pervasive among traders and investors as they don’t know the ultimate outcome of the shock. History also shows very few developments that seriously jolt markets result in the worst of the markets’ fears being eventually realized.

Central banks are easing monetary policies to thwart negative economic impacts of Covid-19. The U.S. Federal reserve in early March lowered its key interest rate by 0.5%, with more rate cuts likely coming as soon as this month. The central banks of Canada, Australia and the U.K. have also lowered their interest rates by 0.5%. Many believe the Fed will soon have U.S. interest rates at zero. While such suggests the U.S. and other central banks are expecting a significant global economic downturn, and/or a recession, the stimulating moves by those  banks will work to boost demand for raw commodities.

Crude oil prices plummet, further pressuring commodity futures markets. Last weekend saw the surprise news that Saudi Arabia and Russia, two of the top crude-oil-producing countries in the world, could not agree on production cuts and instead decided to ramp up their output. This apparent all-out price war between the two countries crashed the global crude oil futures markets. Crude oil is arguably the leader of the raw commodity sector. When Nymex crude oil dropped below $28.00 a barrel last Monday and to a four-year low, most raw commodity futures markets responded by selling off significantly, themselves. As long as Nymex crude oil futures remain below $40.00 a barrel, it will be difficult for most other commodity markets to sustain price uptrends on the charts. As an important aside, both Russia and Saudi Arabia despise the North American shale-oil producers that have taken away so much of their market share the past 10 years. Do not be surprised if Russia and Saudi Arabia turn their oil-production spigots wide open for a few months, which would very likely drive many U.S. and Canadian shale-oil producers out of business, only to then start to curtail their production levels after meeting their intended objective of damaging the U.S. oil industry. A bright spot in this dim view of the raw commodity sector in the coming months is that energy prices will decline, and probably significantly. North American gasoline prices at the pump will begin dropping soon, and by summertime retail gasoline prices could be well below $2.00 a gallon. 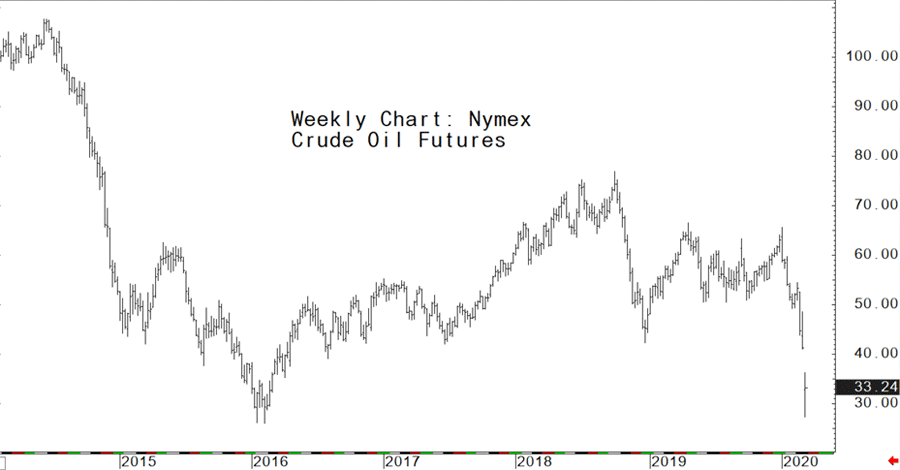 Raw commodity sector also in technical trouble. The weekly chart for the Goldman Sachs Commodity Index (GSCI)—a basket of several raw commodity futures markets—paints a dour picture of the overall raw commodity sector at present and likely for the coming months. See on the GSCI chart that prices are trending lower and this week hit a four-year low. The down-trending price action of the GSCI will have to come to an end before there will be early technical signals the sector has bottomed out and that better times lie ahead. 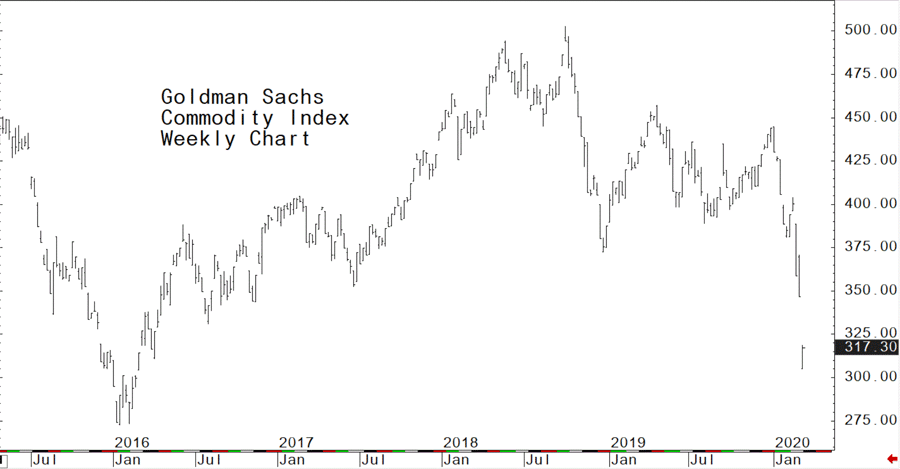 U.S. Treasury market yields hit record lows, suggesting economic recession. The tumult in the global stock and financial markets the past few weeks has caused a  perceived “flight to quality” among traders and investors worldwide. That means they are seeking out not only gold, but also U.S. government-backed securities in the form of Treasury bonds and notes. The benchmark 10-year U.S. Treasury note saw its yield drop dramatically the past week and hit a record low of 0.387% earlier this week. Veteran Treasury market watchers know that falling bond yields are suggestive of stagnating economic growth and even recession. Falling government bond yields worldwide also suggest worrisomely low producer and consumer price inflation, or even pride deflation. Deflation is the archenemy of most raw commodity markets. The one positive of the drop in government bond yields is that consumers will see lower borrowing costs on banks’ consumer loans, including home mortgage rates. 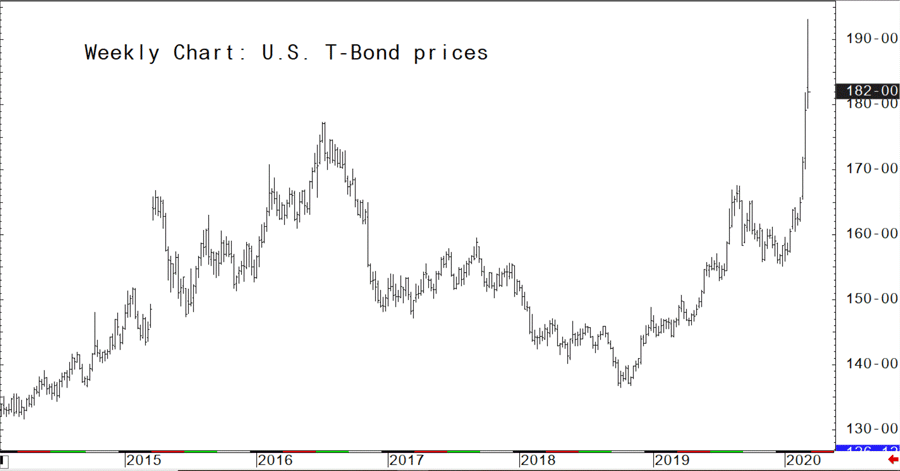 U.S. dollar depreciates on world foreign exchange market. Growing notions of impending U.S. and worldwide economic recession, including the drop in U.S. interest rates, have sunk the U.S. dollar’s value on the foreign exchange market. The U.S. dollar index, which is a basket of six major world currencies weighted against the greenback, this week dropped to a more-than-one-year low. However, the de-valued dollar recently comes as a surprise to some currency analysts, as during times of geopolitical uncertainty the U.S. dollar is usually sought out as a safe-haven asset. Such could still be the case if the global stock and financial markets continue to exhibit high volatility and keen anxiety. 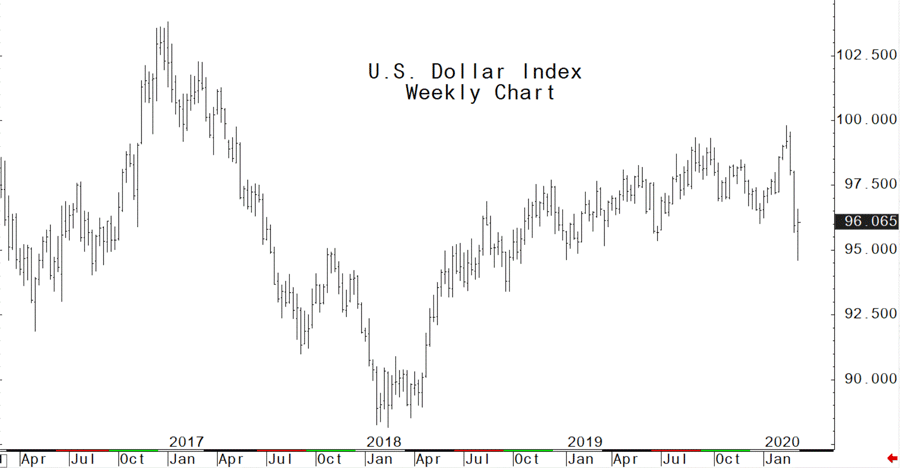 The ramifications of a bear market in equities. A bear market in U.S. stocks, defined by most as a 20% drop in value from the highs, has not occurred in over a decade. If such occurs it could prompt more speculator and investor interest on the long side in raw commodity futures, including precious metals—a cyclical shift from paper assets like stocks, into hard assets like commodities. Strong bull market runs in commodity futures markets need to have good speculator participation on the long side. 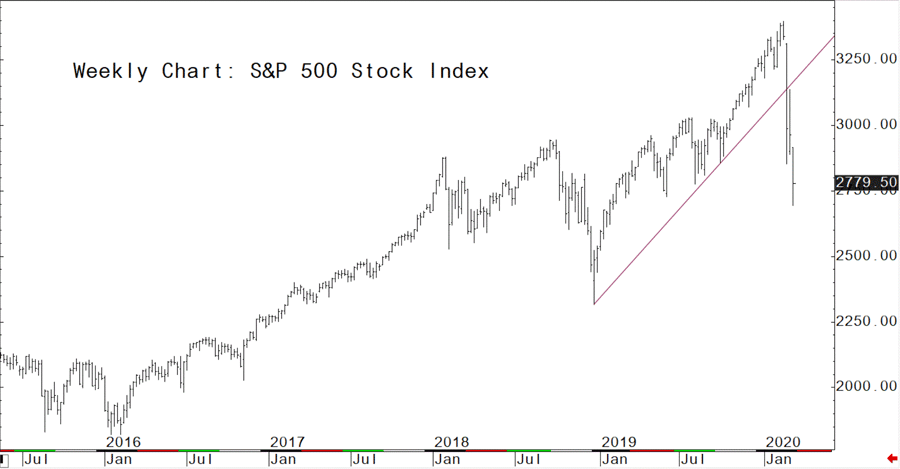