This leading indicator points to another yield curve inversion soon

(Kitco News) - The gold-silver ratio, a measure of how many ounces of silver can be bought with one ounce of gold, is now at 99.73, the highest level since 1991. The power of this ratio lies not in its descriptive force in telling how overbought gold is relative to silver, but rather in its prescriptive ability to forecast economic sentiment by leading the yield curve.

This makes intuitive sense, as a flattening yield curve signals worsening market sentiment, which is usually coupled with a flight to safe haven assets like gold. The yellow metal, in such cases, would rise faster than silver, which is viewed by investors as more of an industrial, rather than investment, precious metal.

The yield curve is often used as a proxy for investor sentiment; as the economic outlooks improve, the long-end of the curve rises faster than the short-end, thereby steepening the yield curve. Conversely, the yield curve flattens as sentiment worsens. An inverted yield curve, or one that is below zero, has historically been followed by a recession.

What ’s even more interesting, is that their relationship strengthens as you advance the gold-silver ratio by six months, as the following chart demonstrates. 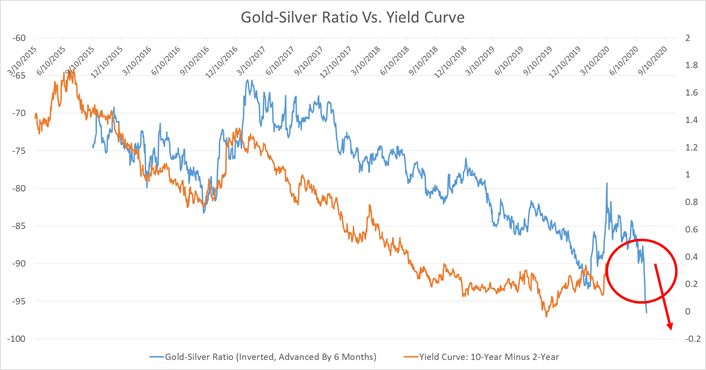 The chart above shows the gold-silver ratio (blue line) inverted, and advanced by six months. The orange line shows the 10-year U.S. treasury yield minus the 2-year yield.

What this tells us is that not only have the two variables been closely correlated over the last five years, but the the gold-silver ratio leads the yield curve in showing market sentiment consistently by six months.

The gold-silver ratio spiked up dramatically in recent weeks following a hasty Fed decision to lower interest rates in light of the spreading coronavirus.

Assuming this inverse relationship and leading power hold, the gold-silver ratio is pointing to a steep fall in the yield curve in the coming months into flat, if not negative territory.

Should an elevated gold-silver ratio prove a sustained negative yield curve towards the third quarter, then a recession may follow in 2021, assuming any monetary and fiscal stimulus fail this year.