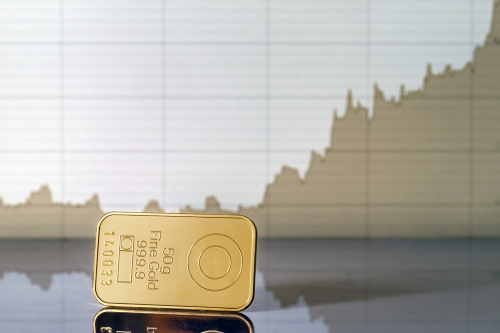 (Kitco News) -A cacophony of instability has hit financial markets at the start of a new trading week, but with central banks, led by the Federal Reserve, dropping interest rates to zero, analysts now say that the only place investors can turn to is gold.

At the beginning of the Asian trading session, the gold market started Sunday evening strong but volatile; April gold futures last traded at $1,559.50 an ounce, up 2.8% on the day.

Meanwhile, the S&P 500 Index opened the Asian session down 4.77% to their daily trading limit outside the United States.

The moves come after the Federal Reserve surprised markets with a second emergency rate cut in as many weeks. Sunday afternoon, the U.S. Central bank said that it was bringing interest rates to within a target range of 0% to 0.25%.

“The effects of the coronavirus will weigh on economic activity in the near term and pose risks to the economic outlook. In light of these developments, the Committee decided to lower the target range,” the Fed said in a statement. “The Committee expects to maintain this target range until it is confident that the economy has weathered recent events and is on track to achieve its maximum employment and price stability goals.”

Some market analysts have described the latest emergency Fed decision as another panic move. Still, expectations of a global recession continue to rise as the coronavirus continues to spread worldwide, prompting nations to effectively shut down.

Economists are now wondering with the Fed’s move, just how bad the global economy will weaken.

The Fed must have been on the phone all weekend with its business contacts and got all the info it needed. To move like this three days before the meeting tells me to expect an avalanche of horrible data in the next few weeks.

Although gold prices are off their opening highs, analysts said that it remains the one safe-haven.

“I think the only thing you can own right now is gold,” said Adam Button, managing director at Forexlive.com.

“The deficits are doing to be outrageous,” he added. “During the financial crisis, the government had to bail out the banks, but now because of the impact of the virus, they are going to have to bail out everyone.”

Phillip Streible, chief market strategist at Blue Line Futures, said that he also expects gold prices to push higher; however, he added that the volatility is going to incredible in the next few days.

Analysts note that gold continues struggling as crashing equity markets are creating a liquidity crisis for investors. Investors are forced to liquid assets like gold to meet margin calls.

In a recent interview with Kitco News, before the Federal Reserve’s emergency announcement, Steven Dunn, head of ETFs at Aberdeen Standard Investments, said that he could see gold prices moving between $1,525 and $1,575 in the current environment of massive volatility.

However, he added that when the dust settles, gold will be the asset to own.

“Central banks are going to continue to lower interest rates and step up their quantitative easing measures,” he said. “Gold will bounce back once investors see all this money being printed. The debt situation is only going to get worse and that will depreciate fiat currencies.”

Streible added that the futures market doesn’t reflect the full sentiment in the marketplace. He added that rising premiums and growing demand in the physical market shows how strong the fear sentiment is.