Recession is coming; gold prices to hit new record highs, but when? 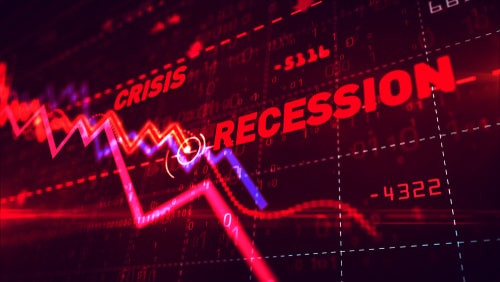 (Kitco News) Banks have slashed their global and U.S.-specific growth forecasts due to the COVID-19 outbreak, stating that recession is on its way.

From the heavyweights like Morgan Stanley and Goldman Sachs to smaller banks, the consensus is clear. The question now is just how bad it could get.

“While the policy response will provide downside protection, the underlying damage from both Covid-19’s impact and tighter financial conditions will deliver a material shock to the global economy,” Morgan Stanley chief economist Chetan Ahya said. “This time will be worse than the global recession of 2001.”

The shift comes as COVID-19 is starting to hit the North American and European economies, with the full impact now estimated to be larger than previously thought. Economists are attempting to gauge from China’s economic disruption and apply it to how the rest of the world will fare.

The American and European economies are estimated to see the worst of the slowdown in Q2, according to Morgan Stanley, which sees U.S. recovering only in 2021.

Goldman Sachs is anticipating a 5% drop in the U.S. activity between April and June after 0% growth between January and March.

“These shutdowns and rising public anxiety about the virus are likely to lead to a sharp deterioration in economic activity in the rest of March and throughout April," Goldman’s chief economist Jan Hatzius said.

ING expects U.S. economy to shrink 8% in Q2, resembling the decline seen during the 2008 financial crisis.

IHS Markit is also penciling in a recession in the U.S., noting that recession is defined by at least two consecutive quarters of contracting gross domestic product.

Bloomberg’s U.S. recession index is currently at 53%, which is the highest probability since June 2009.

Even U.S. President Donald Trump is not ruling out a recession anymore, stating Monday that the U.S. economy “may be” heading into recession due to the coronavirus disruptions.

“I don’t, number one, determine recession,” Trump said. “I just say this: We have an invisible enemy. We have a problem that, a month ago, nobody ever thought about.”

What does it all mean for gold?

Many precious-metals analysts have been comparing gold’s recent downward trading pattern to the precious metal’s behavior during the 2008 financial crisis.

“The current gold market sell-off is similar to what happened during the financial crisis, when gold prices dropped for a period of over three months along with collapsing equity valuations, as increased volatility and margin calls forced levered investors to sell to provide liquidity,” explained TD Securities commodity strategists.

But this sell-off is not only temporary, according the bank, and it can also lead to even higher highs for gold.

“If as expected, we get the coordinated G-7 central-bank and G-7 government stimulus, the pending historic low real/nominal interest rates, liquidity injections and income support programs should reduce volatility and drive capital into gold again, lifting prices to new highs near $1,800/oz,” the strategists said.

This view is echoed by many analysts across the precious-metals space. Blue Line Futures president Bill Baruch told Kitco News on Monday that gold is looking at a recovery in the medium term and even new record highs in the next 12 to 18 months.

RBC Capital Markets views any gold declines as a buying opportunity at the moment as it expects higher prices going forward.

“The gold-positive conditions that led to gold’s rise were not and are not over,” said RBC commodity strategist Christopher Louney. “On average, we expect gold’s elevated price levels to extend through Q2, meaning that gold prices are likely to average at or even above our high scenario in H1 2020 depending on how the crisis unfolds economically.”

“Gold’s role as a ‘perceived safe haven’ is largely what got it here, and despite these sharp moves lower, we do not think it represents the end of the risk-off narrative for gold,” Louney added.

On Tuesday, gold saw a strong rally forming as prices were up nearly 4% on the day with April Comex gold futures last trading at $1,541.10.