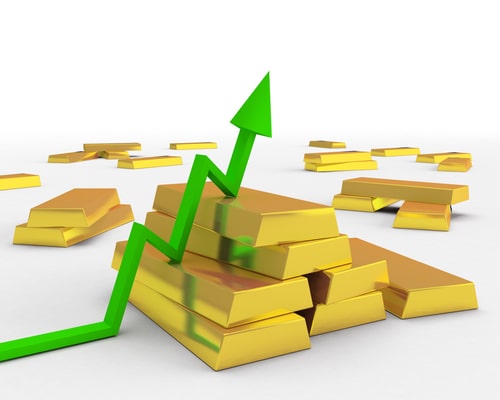 (Kitco News) Growth outlooks for the U.S. are becoming gloomier by the day with anticipated surging unemployment making things even more uncertain.

The latest forecasts from the big investment banks warn investors that the impact from the COVID-19 outbreak might be more significant than previously expected, with Q2 estimated be hit with massive U.S. output drop and a global recession.

Morgan Stanley now sees U.S. GDP falling 30.1% in Q2, which will lead to unemployment jumping to 12.8%. The numbers come from the updated report released on Sunday.

“Economic activity has come to a near standstill in March,” Morgan Stanley said. “As social distancing measures increase in a greater number of areas and as financial conditions tighten further, the negative effects on near-term GDP growth become that much greater.”

Goldman Sachs said it updated its global economic forecast, estimating a contraction of about 1% in 2020, which would be even worse than in 2009. For the U.S. alone, Goldman projects a drop of 24% in output in Q2.

Some other pessimistic outlooks include Bank of America Corp, projecting a fall of nearly 25% in Q2 U.S. GDP. Also, JPMorgan Chase & Co. is looking at a 14% drop for Q2.

All of these forecasts are based on estimated production shutdowns that are happening all across the U.S. and Europe.

“This is a planned, organized partial shutdown of the U.S. economy in the second quarter,” Bullard said. “It is a huge shock and we are trying to cope with it and keep it under control.”

When determining just how bad things could get, economists look at the numbers coronavirus cases worldwide, waiting for that peak.

“Everything depends on when the coronavirus infections peak and begin to slow down,” said Sayed. “The most-watched indicator for investors has become the number of coronavirus cases, which has now topped 339,000 at the time of writing and continues to go higher. Many countries have reached, or are about to reach, a critical inflection point where things get out of control, as we’ve seen in Italy.”

Considering how uncertain things are at the moment, the equity markets could still be far from the bottom, added Sayed.

“The scariest scenario is that it turns into a credit crisis which will break the financial system … With most investors trying to withdraw their money from these asset classes, it could soon turn into a very deep financial crisis,” he said. “The right moment to begin accumulating equities is when all hope is lost, which could be months away unless a miracle happens and the virus suddenly disappears or a vaccination is discovered.”

This point was made clear as stocks tumbled Monday morning even after the Federal Reserve introduced several new programs to help support markets during COVID-19 volatility, including a no-limit QE program.

This week, all eyes are on the U.S. weekly jobless claims numbers, scheduled to be released on Thursday. And the numbers could be shocking, according to ING chief international economist James Knightley.

“Assuming we average out at a seven-fold increase in claims versus last week, this would translate into a 2 million rise in jobless claims. By way of comparison, the record high was 695,000 in early October 1982 with the Global Financial Crisis peak being 665,000 in late March 2009,” Knightley said.

#GOLD UPDATE: Prices continue to push to new session highs with prices up more than 3% on the day, last trading at $1,533.50 an ounce. U.S. #equities are still struggling with the DJIA still down more than 500 points for the session | More on https://t.co/ciCdWggyox #kitconews | pic.twitter.com/VQXeQ9m8ik

Can we expect record highs for gold?

Given this dire situation, gold’s long-term outlook is solid, with many analysts estimating higher highs for the precious metal once the coronavirus uncertainty has been more or less resolved.

In the short-term, however, analysts warn of more sideways trading as any physical buying is currently being offset by professional selling to raise cash.

“The key uncertainty here is whether or not the liquidity crunch — the dash for cash — is going to find some sort of stability,” TD Securities commodity strategist Daniel Ghali told Kitco News.

More temporary sell-offs are not ruled out for gold despite a very optimistic outlook on the metal, said MKS PAMP Group.

“We still feel that the case for gold is strong, yet by no means immune from another wave of liquidation in case markets shut down, or, U.S. equities hit new lows forcing repayment of margin loans on already cash strapped companies,” MKS said. “Bottom line, there very well could be a replay of what played out a few weeks ago in gold to the downside, but we are certain gold will shine once again.”

But “it is just matter of time” before gold will begin to trade higher, MKS added, citing “almost inevitable global recession” and very loose monetary and fiscal policies.