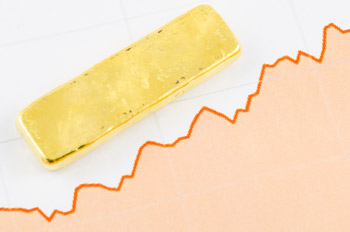 (Kitco News) -  Gold soared for the second day in a row early Tuesday after the Federal Reserve announced dramatically increased measures to prop up the economy and markets, with open-ended quantitative easing and other programs.

Further, the U.S. dollar is softer and recent gold selling to meet margin calls and offset losses in other markets appears to be abating, some say.

“The price surge was triggered by the announcement of new and sweeping measures by the U.S. Federal Reserve to combat the recession that is looming in the U.S.; this also brought the U.S. dollar’s upswing to an end for the time being,” said Commerzbank analyst Carsten Fritsch.

“Everyone has wanted a shiny piece of gold over the last 24 hours, after the Fed took unprecedented measures to defend the U.S. economy from the coronavirus outbreak,” said Lukman Otunuga, senior research analyst at FXTM. “The precious metal has appreciated...since the start of the week and has the potential to extend gains on dollar weakness. A sense of unease over the coronavirus developments and fears around a global recession should support appetite for gold moving forward.”

Fritsch commented that measures being taken by Fed policymakers are “considerably more aggressive” than those implemented during the financial crisis that began in 2008. Further, the U.S. and German governments are working toward massive stimulus packages.

Numerous analysts have been blaming weakness in gold during the last couple of weeks as selling in the futures market to offset losses elsewhere. Fritsch pointed out that the metal rose sharply Monday even though U.S. equities were still on the defensive.

“The fact that gold nonetheless gained by 3.5% yesterday can be seen as the first sign that the selling pressure brought about by forced selling is gradually abating,” he said. “The SPDR Gold Trust also registered an inflow yesterday for the first time in 10 days – and at just shy of 16 tons, it was fairly sizable into the bargain.”

On Tuesday, stock-index futures were pointing to a sharply higher open on Wall Street.

Commodity brokerage SP Angel commented that the price increase also has been partly driven by supply constraints as three major gold refineries in Switzerland announced Monday that they have suspended production for at least a week due to measures to combat the pandemic.