Worried about gold shortage? Here's what the gold price thinks 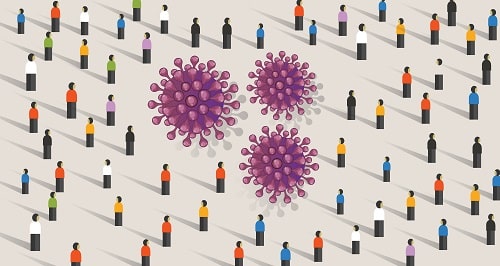 (Kitco News) A massive three-day bounce in stocks has proven to be only temporary as equities tumbled Friday, once again dragging gold down with it.

One of the biggest news to drive markets next week will be that the U.S. has become the new epicenter for the COVID-19 outbreak, surpassing China and Italy with the number of people infected.

"The spread of the virus will continue to be very important, especially with the U.S. becoming the epicenter now," said TD Securities commodity strategist Ryan McKay.

The world will be watching Italy to see if there will be a flattening of the curve there, McKay told Kitco News Friday.

"If we start to see a solid trend of slowing growth there, it could be a good sign that social distancing measures do indeed work and would sort of give us the timeline as to what to expect over here in North America potentially," he noted.

What makes the news of the U.S. being the new COVID-19 epicenter worrying is the extent of how the rest of the global economy relies on the U.S. market and the U.S. consumer, said Gainesville Coins precious metals expert Everett Millman.

"The fact that the Fed has to use all of its ammunition sets the stage for everywhere else in the world that easy monetary policy and stimulus measures will be the norm for at least several weeks, possibly next several months," he said.

There is still a lot of hope around the $2 trillion stimulus package, which the House passed by voice vote on Friday afternoon.

Stimulus aside however, what concerns the markets is the enormity of the economic damage to the U.S. economy.

"While the stimulus measures being rolled out around the world can mitigate the initial negative fallout from the coronavirus outbreak and help support the eventual recovery, COVID-19's economic toll could be more severe," said FXTM market analyst Han Tan.

And no matter how massive the fiscal and monetary stimulus packages will be, they are all about damage control, not growth, noted ING's Chief International Economist James Knightley. "The U.S. can only grow once the economy re-opens," he said.

U.S. jobless weekly claims were just a sneak peek of the real "data horror show" that's about to be revealed via all the other U.S. macro datasets scheduled for release starting next week, said Nomura Global Markets Research.

Thursday's jobless claims number saw a spike of more than three million, with many people getting laid off amid widespread shutdowns across the U.S.

"Given that the jump in claims to more than three million appeared to capture only a fraction of the claims reported by some states, particularly California, we are braced for a surge to nearer five million," said Capital Economics senior U.S. economist Michael Pearce.

Friday's nonfarm payrolls data will be slightly less significant because March's survey was conducted before all major layoffs hit the U.S. "The March payroll survey was conducted in the second week of this month and therefore came too early to capture the full hit to the labor market from the pandemic," Pearce noted.

.@theRealKiyosaki says self-isolation is making people realize they got “screwed” by the system: “As they lose their jobs, their homes, their pensions, their businesses … they’re waking up that they’re being screwed” | @DanielaCambone @KitcoNewsNOW | https://t.co/u6ufKYpN0b

There were a lot of questions surrounding the breakdown between COMEX futures prices and spot prices, with futures trading unusually higher.

These diversions could continue into next week as major gold refineries are closing down shop temporarily and investors worry about contract delivery amid transportation delays.

"There is a lot of restrictions to mining assets themselves as the companies are facing pressure on the production side," said Colin Hamilton, managing director of commodities research at BMO Capital Markets.

On top of mining closures, the recent shutdown of three major gold refiners in Switzerland's Ticino had a knock-on effect on prices Tuesday.

"That's what caused the problem this week — three major refineries shutting down in Switzerland. They produce the bars that have the capability to meet the Comex futures contract," he explained.

Hamilton does not see this impacting the gold prices going forward, though, saying that there is no shortage of physical metal out there. "Those are short-term implications … and that's a problem of the contract rather than a problem of the market," he said. "We've got 9,000 tons of gold available in London."

Some traders thought that the gold prices would have shot up due to these closures, but the only increases were in premiums being charged, said Millman.

"The only people who are active in the gold and silver market are charging very high premiums. The price could be even be going down, but the actual cost to get physical metal is going up," he told Kitco News on Friday.

So, where's gold heading next week?

The majority of analysts do expect higher prices going forward, noting that any dips are likely to be bought.

The gold market is starting to recover from the liquidity crunch that saw prices tank earlier in March, said McKay.

"Gold will head marginally higher from here," he said. "The Fed's actions in the commercial paper market as well as adding corporate bonds to their QE has alleviated that pressure and need for liquidity."

Hamilton also sees a bit of support going forward. In terms of levels, he highlighted $1,600 as a good consolidation level and $1,650-$1,660 as the next resistance point.

There is still a significant risk for gold prices, said Millman, not ruling out another major sell-off in equities that could drag gold below $1,500 again. "If the damage to the rest of the global market is significant, people could get those margin calls again," he said. "We are going to continue to see volatility."

Traders should be careful not to get stuck in over-leveraged long-gold positions because there is still so much uncertainty. "It is too soon to call whether or not gold is starting its next bull run or if we are going to continue to have this confusion," Millman said.

From a longer-term perspective, gold is going much higher, added McKay, citing TD Securities projections of a jump to $1,800 an ounce and then $2,000 toward the year-end.

"Inflation expectations are starting to lift off the ground as we have both QE infinity and fiscal infinity. All of this continues to firm the underlying support for gold," he said. "Ultimately, when we start to see some normalization, then we should start to pick up and head much higher from here."

For gold to take off, non-stop global QE will need to become the area focus for markets, McKay explained.

Millman said he is sticking to $1,750 as his high-end target with the most significant long-term driver being COVID-19's inflationary impact.

"Right now, COVID-19 crisis has been a very deflationary event. But when supply lines get back into order that could prove to be very inflationary because of the all the extra liquidity out there. That will be a bullish driver for gold. If we do see an inflationary reaction in Q3 and Q4 that will increase the appeal of precious metals as an inflation hedge," he noted.

Another key dataset to keep an eye on next week is ISM manufacturing PMI on Wednesday and ISM non-manufacturing business activity on Friday. CB consumer confidence will also be on economists' radars on Tuesday, along with the Chicago PMI data.

U.S. pending home sales index is due out on Monday and the ISM NY business conditions along with U.S. factory orders are scheduled for release on Thursday.