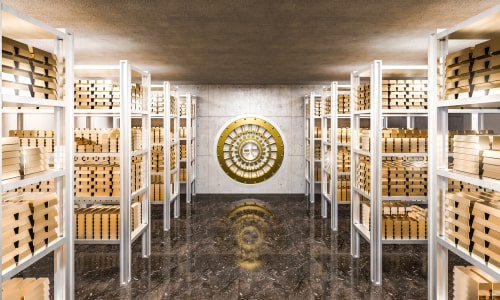 (Kitco News) There is no shortage of gold out there, but there are some serious "physical bottlenecks" for certain gold products that are just sitting in wrong locations, Scotiabank said in its latest update.

"If there were a major shortage of physical gold, spot gold prices would be trading at a premium to futures prices, which is not the case," Scotiabank commodity strategist Nicky Shiels said on Friday.

This past week, economists have been busy answering traders' fears regarding a shortage of physical gold and silver. The issue escalated last week when an unusually wide spread between futures and spot prices developed, with the former being much higher.

"In gold, the impact [has] shown up [in a form of] major dislocations between physical and paper, and within physical pricing. The basis/premium between COMEX and OTC/physical gold (surprisingly) widened to almost $100, at a time when that premium should be tighter and closer to zero, given the supposed physical shortage. The Gold futures curve, which historically should always remain in contango market, showed intermittent signs of flipping into backwardation (April-June spread)," Shiels described.

Economists responded by citing April futures contract expiry, lack of flights available to transport the right type of gold bars from London and closure of major refineries in Europe.

"The current disruption to gold production is tiny (around 1%); more importantly, there are ample above-ground stocks that could be enticed out at a (higher) price. There's ~90m oz. sitting in known vaults (e.g.: ETFs) with approximately 6.3bn oz. (yes billion), or 60x the annual production of gold, being held in jewelry, official sector and private investments," she noted.

"Overall physical demand is strong in 'wrong' locations* or in the 'wrong' form** while metal is sitting where it's not needed (Asia, Africa), in a situation where airlines/transportation networks are disrupted," Shiels added. "*Wrong location: supply issues/refinery shutdowns in U.S. & Europe **wrong form: demand for limited 100 oz. or 1kg (not 400 oz. bars)"

When examining recent gold price action, Shiels wrote that the yellow metal has found its post-crisis bottom sooner than expected.

"Gold has found a bottom at $1,450," the commodity strategist said. "Gold is likely bottoming earlier because of a much faster and larger policy response than markets could ever have anticipated." 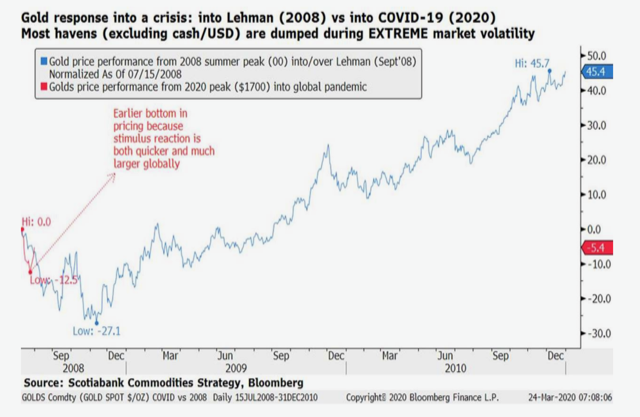 The metal should be trading closer to $1,700 an ounce, she added, explaining that gold is seeing "a perfect storm" from a macro perspective, which could push prices to new record highs.

"Gold [is likely] to begin an even more bullish longer-term trajectory vs. the 2008-2013 bull run," she said. "Positioning is clearly a lot cleaner, max macro fear has dialed back from extreme levels, risk appetite in U.S. equities has returned, US$ remains somewhat capped (Feds unlimited QE and U.S. taking top virus case spot) and funding pressures have alleviated somewhat."

Going forward, gold is bound to benefit from the massive monetary and fiscal stimulus that is extremely inflationary.

"Overall, as day follows night, so inflation follows deflation, and Gold is not waiting around," Shiels said. "If (when) equity market volatility subsides, and macro fear lowers from extreme levels, prices should find another leg higher, which it is attempting to accomplish."