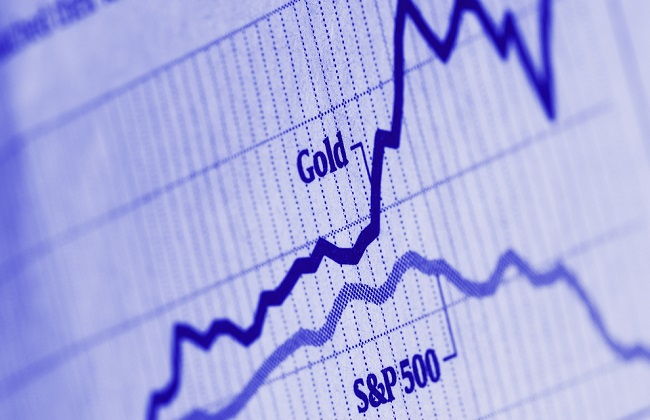 (Kitco News) - The first quarter saw gold prices massively outperform equity markets and this trend is expected to continue, according to one former Bear Stern’s analyst.

Jesse Felder, publisher of the Felder Report investment newsletter, reiterated his long-term bullish outlook for gold, saying in a recent report that gold prices could easily push above its 2011 all-time highs. Gold prices are starting a new trading week with relatively low volatility as prices trade above $1,600 an ounce. June gold futures last traded at $1,646.70 an ounce, relatively unchanged on the day.

Felder said that he sees two factors that should prompt investors to add a “significant portion” of gold to their portfolio. .

The first factor Felder said that he is watching is the value of gold compared to equity markets. He said that the signal to buy gold over equities was triggered in February when the gold:equity ratio turned positive.

“The 36-month rate of change in the ratio between gold and the S&P 500 has provided a pretty good signal in this regard. In the past, when it has crossed above the zero line it has been a good buy signal for gold and good sell signal for stocks,” he said

His comments come after a dismal first-quarter performance for the Dow Jones Industrial Average and the S&P 500.

Financial markets were hit hard last month as the global economy came to a virtual standstill because of the COVID-19 pandemic. Governments all over the world have forced nonessential businesses to shutter and people to stay at home in an attempt to slow the spread of the deadly virus.

The second factor that will continue to support gold prices, Felder said, is the massive amount of money that is being spent to combat the impact the coronavirus is having on the global economy.

“Gold prices tend to rise when the fiscal deficit as a percent of GDP is rising,” he said.

“Some expect the deficit to expand by a much greater degree in the current crisis than it did a decade ago as a result of the combination of record fiscal stimulus paired with falling revenue. If so, gold would very likely break out above the high it set in 2011,” he said.

Felder added that not only is gold a vital portfolio diversification tool, but in these times of economic uncertainty, it is also an essential asset for wealth preservation.