Gold prices could see a more bullish run than 2009-2012, but there is a caveat, says Scotiabank 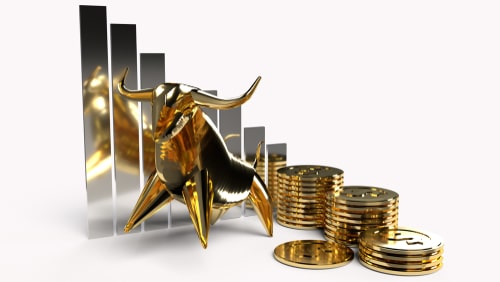 (Kitco News) Many analysts have been comparing gold's trading pattern during the COVID-19 crisis to that of the 2008 financial crisis, forecasting new record highs for gold. Scotiabank joined in, estimating a bigger climb than the one witnessed during the 2009-2012 bull run.

The key difference, however, is that it will be more short-lived this time around, said Scotiabank in its most recent update.

“Sometimes, consensus trades aren’t wrong – this one is looking increasingly like a ‘Nike-Swoosh’ trajectory, floored at $1,450, that’s likely to be more bullish than the 2009-2012 bull run (but also shorter-lived),” Scotiabank commodity strategist Nicky Shiels wrote Thursday.

Shiels’ update came after the Federal Reserve announced its $2.3 trillion effort to bolster local governments and small and mid-sized businesses. “We are deploying these lending powers to an unprecedented extent…We will continue to use these powers forcefully, proactively, and aggressively until we are confident that we are solidly on the road to recovery,” Fed Chair Jerome Powell said Thursday.

Any doubts around the U.S. central bank being “all in” or not were “put to rest,” wrote Shiels. “The Fed announced new lending facilities … but more importantly (for some assets) amended the primary and secondary corporate credit facilities to include High Yield ETFs and fallen angels,” she said.

Despite a strong move higher, there are still questions around why gold prices did not board the runaway train just yet, noted Shiels.

“In a nutshell, lack of liquidity (due to short-term physical/futures dislocations limiting market making and risk) and headwinds from commodity players (very little Asian physical demand, active CB lending not buying), has ensured prices remains relatively capped, for now,” she explained. “The lack of liquidity can act as a double edged sword, especially if (matter of when?), investor demand tilts even more one-sided.”