As IMF warns of 'crisis like no other', gold is working its way to new record highs 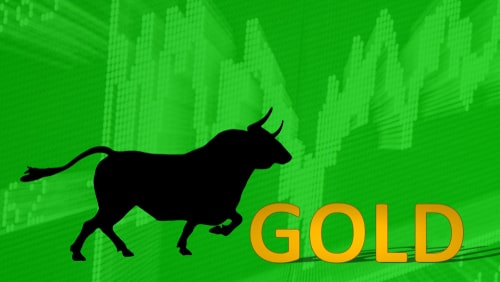 (Kitco News) The world is in for the worst financial crisis since the Great Depression of the 1930s as the global economy grapples with the "great lockdown," according to the latest from the International Monetary Fund (IMF).

The expectations now are that the global economy will contract by 3% in 2020, which is much worse than the 0.1% GDP decline seen during the Great Recession of 2009, the IMF said. The economic recovery is priced in for 2021 with 5.8% global growth.

“It is very likely that this year the global economy will experience its worst recession since the Great Depression, surpassing that seen during the global financial crisis a decade ago,” IMF chief economist Gita Gopinath said in the latest World Economic Outlook report.

Gopinath described the COVID-19 crisis as “a great lockdown” and told reporters on Tuesday that “this is a crisis like no other.” The total cost to the global GDP could amount to $9 trillion, Gopinath added.

Canada is expected to be hurt more than the U.S. or Japan. According to the IMF’s breakdown, a 5.9% contraction is expected in the U.S., a 7.5% drop in 19 European countries, a 6.2% decline in Canada, a 5.2% drop is projected for Japan, and a 6.5% contraction penciled in for the U.K. In China, where the virus outbreak started, things are looking a bit more optimistic with the IMF estimating to see a 1.2% advance in 2020 as the country’s economy is already opening up.

The warnings of dire times to come have been echoed by many international organizations during the past month, including the World Trade Organization, which said that global trade will contract by somewhere between 13% and 32% this year with the economic fallout expected to be felt “for a long time.”

Goldman Sachs said it sees advanced economies contracting by about 35% in Q2. Even though the number of coronavirus cases worldwide seems to be peaking, it is all based on social isolation, Goldman added. “The improvement is probably a direct consequence of social distancing and the plunge in economic activity, and could reverse quickly if people just went back to work,” the firm’s economist Jan Hatzius wrote on Monday.

Gold's rally has been picking up steam amid these announcements with June Comex gold futures last trading near fresh 7.5-year highs at $1,777.70, up 0.93% on the day.

Many gold analysts have already compared the precious metal’s current trading pattern to that of 2009-2012 bull run, projecting new record high prices for gold in the next several years.

“When the history of 2020 is told, we expect gold to have been a main beneficiary of unprecedented monetary stimulus that typically supports stock prices,” Bloomberg Intelligence senior market analyst Mike McGlone tweeted Tuesday. “New highs in terms of many major currencies portend something similar in dollar-denominated gold as a matter of time.”

When the history of 2020 is told, we expect #gold to have been a main beneficiary of unprecedented monetary stimulus that typically supports #stock prices. New highs in terms of many major currencies portend something similar in dollar-denominated gold as a matter of time. pic.twitter.com/T7mSc8u9Qg

Gold is just beginning its rally, McGlone added. “Unprecedented global monetary stimulus … likely does more to sustain the metal's rise. Gold is outperforming the S&P 500 and the ratio between the two is poised to revert to the higher mean.”

Scotiabank also weighed on this, stating that gold prices could see a more bullish run than the 2009-2012 record high period, but warned of one caveat.

“Sometimes, consensus trades aren’t wrong – this one is looking increasingly like a ‘Nike-Swoosh’ trajectory, floored at $1,450, that’s likely to be more bullish than the 2009-2012 bull run (but also shorter-lived),” Scotiabank commodity strategist Nicky Shiels wrote Thursday.

TD Securities is looking for gold to reach new record highs in USD-terms as well, pricing in $2,000 an ounce for the yellow metal and highlighting rising inflation expectations as one of the main long-term drivers.

TD’s short-term target is $1,800 an ounce, followed by gold eventually rising to $2,000. “That won’t happen overnight. But we are more likely than not heading to $2,000 level. I have to say; we are getting close to my $1,800 shorter-term target,” TD Securities head of global strategy Bart Melek told Kitco News last week.

Plus, if you are a long-term investor, you can’t forget about inflation, Melek added. “You have to start wondering what happens if people go bankrupt,” he stated. “Risk is that there is a debasement of currency or purchasing power via really low interest rate environment. For long-term investors, we will continue to see moves of money into gold.

Another bullish gold forecast comes from Blue Line Futures chief market strategist Phillip Streible, who is projecting gold to average $1,750 in Q2, $1,850 in Q3, and $2,000 in Q4.

Gold has been one of the few lucrative investments year-to-date, up nearly 13% in 2020.

“Gold has scaled levels … not seen in more than seven years, thanks to dollar weakness and global recession fears,” FXTM senior research analyst Lukman Otunuga. “The precious metal remains in fashion … Further gains may be on the cards this week if corporate earnings paint a gloomy picture and the Dollar weakens on disappointing data.”