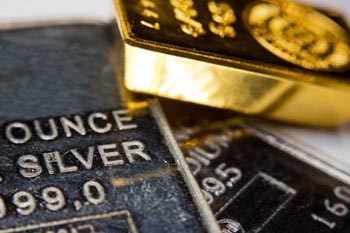 (Kitco News) -  Holdings of gold and silver by exchange-traded funds have soared so far this month. Analysts say this bodes well for the precious metals since investors typically hold ETF positions for the long term.

Commerzbank analyst Daniel Briesemann pointed out that ETFs tracked by Bloomberg have accumulated 77 metric tons of gold since the beginning of April. This comes after the World Gold Council reported last week that global ETF holdings climbed by 151 tons in March, with total first-quarter holdings rising by 298 tons, the most since 2016.

BMO Capital Markets pointed out that holdings of gold by ETFs have risen for 16 consecutive business days, with the year-to-date increase more than 10 million ounces.

“The ETF holders hold for the longer term and are probably more interested in portfolio asset allocation than futures holders, who tend to trade in and out [of the market] based on headlines,” said George Gero, managing director with RBC Wealth Management.

“It’s not just an economic and political barometer, but it’s an additional currency, especially in the international investment world, where if you own or live with a currency that is weak, you have to add gold. You’re going to start doing what the central banks have been doing – adding gold.”

Meanwhile, silver ETFs also have been “extremely popular,” rising by just under 280 tons since the start of the month, Briesemann added.

ETFs in precious metals trade like a stock but track the price of the commodity, with metal put into storage to back the shares. This gives investors access to price gains without having to take on costs such as assaying and storage.

“In contrast to ETF investors, speculative financial investors have not yet jumped back on the bandwagon,” Briesemann said.

The most recent positioning data from the Commodity Futures Trading Commission shows that money managers’ net-bullish position in gold changed little in the week to April 7. The net long was 152,482 futures contracts, compared to 152,598 the week before

“In other words, the latest rise in the gold price has not been driven by speculation … which means it may also prove lasting,” Briesemann said.

Briesemann commented that gold is benefiting from the vast sums of money that central banks are pumping into economies.

“Gold is also benefiting from the ever-growing rescue packages that individual countries are rolling out to support their economies, and which will put them in debt up to their eyeballs,” Briesemann said. He later added, “Reducing these mountains of debt will presumably take generations, so it is hardly surprising that gold is in demand as a store of value.”

TD Securities said in a research note that investors are also moving into gold in response to an environment in which interest rates are low, meaning a negative real yield when factoring in inflation.

Gero pointed out that as gold prices have risen, open interest is also rising in the futures lately.

“Technically, there are bullish signs,” Gero said, noting that gold has been volatile but posting higher daily highs. “There are a lot of things helping gold.”