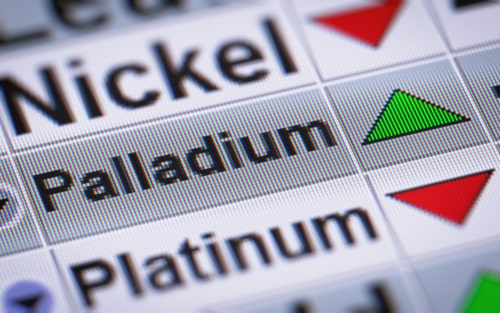 (Kitco News) Palladium is gaining momentum this week, even though prices are long way off their record highs reached in February.

Coronavirus has really impacted palladium prices in the last month as global shutdowns tanked auto demand and, at the same time, put some pressure on supply. Palladium went from an all-time high of $2,700 seen at the end of February to nearly $1,400 by mid-March.

Supply concerns have been one of the main drivers behind palladium's stellar performance this past year. The majority of palladium's demand comes from the auto sector as the metal is used in catalytic converters that reduce emissions in gasoline engines.

Even now, majority of analysts are projecting a supply deficit this year, according to Rhona O’Connell, INTL FCStone’s head of market analysis for EMEA and Asia regions.

But big news this week was Norilsk Nickel, the world’s largest refined nickel and palladium producer, contradicting the majority of analysts, and projecting a small surplus for this year.

“While the majority of market analyses have been pointing to persistent structural deficits in the palladium market, ourselves included, Norilsk caught the attention yesterday when forecasting a small surplus this year, albeit of only ~0.1M ounces,” O’Connell said Thursday.

This is projected to be a temporary surplus as Norilsk expects deficits to resume once the world reopens after the coronavirus outbreak.

“The company's outlook for light vehicle sales, predicated on numbers from LMC Automotive, a major consultant in the sector, involves a net overall fall this year of 21% with a 15% gain in 2021—which would still leave sales 9% below 2019 levels; our interpretation of this is that it would put palladium offtake at perhaps 7% below 2019 levels given increased loadings as regulations tighten,” O’Connell said.

Norilsk Nickel’s projections were made public during its latest investor presentation.

When it comes to the COVID-19 crisis, the company said it put aside $140 million towards medical supplies and infrastructure. “Norilsk notes that so far there has been no impact on operations, sales or procurement with the exception of minor cancellations of nickel and palladium deliveries; supplies and logistics are not disrupted as almost 90% of materials and supplies are sourced locally,” O’Connell added.

In light of Norilsk’s estimates and plunging auto demand in Europe, O’Connell has updated her own forecast and now projects only a small deficit for this year.

“We have revised our palladium numbers and are now looking for the market to be in a small deficit of perhaps one week’s demand, increasing again to roughly three weeks’ demand next year. It is important to bear in mind that new car purchases often involve the change-out of a previous vehicle and a proportion of these are end-of-life. Scrap supply is therefore also reduced so both sides of the equation are affected,” O’Connell said.