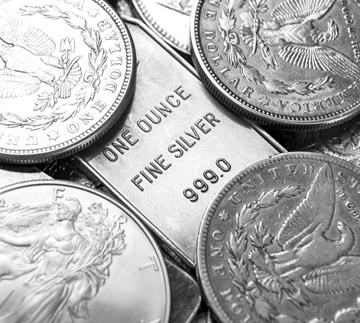 (Kitco News) - Commerzbank looks for silver prices to rise in the second half of the year and reiterated its 2020 outlook for $18-an-ounce metal by the end of 2020, according to a report released Thursday.

Silver weakened early in 2020 due to its role as an industrial metal, Commerzbank said. Industrial base metals like copper also fell sharply on worries that the COVID-19 pandemic would hurt demand as the economy weakens. However, silver eventually began acting like a precious metal again, Commerzbank said, with strong demand coming from exchange-traded funds.

“As soon as the coronavirus or pandemic is under control, the global economy should recover, which we expect to happen in the second half of the year,” said the Commerzbank report, written by analyst Daniel Briesemann. “As a precious metal with an industrial character, silver should also benefit from this. In line with the recovery in base-metals prices that we expect, silver prices should also rise accordingly if industrial demand regains strength.

“Since gold should not fall significantly or sustainably, we see silver as being supported from this side as well.”

Inflows into silver-backed ETFs have totaled 714 metric tons so far in April, a rise of 3.5%, Commerzbank said, citing Bloomberg data. ETFs trade like a stock but track the price of the commodity, with metal put into storage to back the shares.

“Since the beginning of the year, the inflows into silver ETFs now add up to 2,021 tons (+10.7%), which corresponds to just under a month of global silver mine production,” Commerzbank said. “Holdings are thus at a record high of almost 21,000 tons.

“For the whole of last year, inflows amounted to a good 2,570 tons, which was itself a high figure (the largest inflows in 10 years). ETF buying interest has thus risen sharply again this year.”

Investors were attracted to silver both due to its low price that hit an 11-year low in March, as well as the metal’s underperformance against gold, Commerzbank said. The gold-silver ratio got as high as 124 last month, meaning it took 124 ounces of silver to buy an ounce of gold, the bank pointed out.

“It was precisely at this point that the above-mentioned inflows into silver ETFs began, which we believe underscores the attractiveness of silver,” the bank continued.

Commerzbank said retail investors, rather than institutional ones, tend to buy silver and silver ETFs. Analysts expect these buyers to hang onto their holdings, as in the past.

“So from this side, there should not be much selling pressure on silver,” they said.

Meanwhile, speculators in the futures market have low net-bullish positioning. Thus should they “jump on the bandwagon,” silver’s price rise may intensify, Commerzbank said.

Demand for silver coins has also been strong, the bank continued, noting that U.S. Mint sales in March of 5.5 million ounces were the most since January 2016. However, the bank added, coin sales “only account for a small part of silver demand compared to the ETF inflows.”

Analysts cited a Silver Institute report Wednesday calling for industrial demand to be weaker in 2020 due to the COVID-19 pandemic. This consumption accounts for roughly half of all silver demand.

However, investment demand is expected to rise, while mine supply is expected to decline, with a number of temporary mine closures occurring over the last couple of months. Thus, the consultancy Metals Focus, which compiles data for the Silver Institute report, looks for the supply/demand surplus to fall to around 14.7 million ounces this year from 31.3 million last year.