MELBOURNE (Reuters) - Major miners are better positioned to weather the coronavirus disruption compared with previous downturns, having drastically reined in debt-fueled buying and operating costs amid investor scrutiny and pressure.

But smaller players could find themselves adrift as capital dries up. The International Monetary Fund predicted the coronavirus pandemic could cause the steepest downturn since the Great Depression of the 1930s.

An exception will be companies that have already secured tie-ups with majors on development projects, in arrangements that see investment step up if richer veins are found, according to interviews with a dozen industry executives, investors and analysts.

But that is just a tiny fraction of the junior market.

Majors have been repaying shareholders since last decade’s disastrous the top-of-the-cycle buys, such as Rio Tinto’s debt-fuelled $38 million purchase of Alcan in 2007, a quarter of which it wrote off five years later.

Gold miners are well placed to weather the downturn, given the commodity’s appeal as a safe haven.

But miners of energy and battery materials will struggle, and some base metals producers may find it increasingly hard to find financing, said James Eginton, senior investment analyst at Tribeca Global Natural Resources Fund in Sydney.

“You arguably will see the industry have to almost support exploration projects rather than equity investors, if the equity markets come under more pressure,” he said.

This could come via equity stakes, such as those BHP (BHP.AX) and Newcrest (NCM.AX) have taken with Ecuador developer Solgold SOL.G or in joint ventures around particular assets.

“History shows that in times like these, having a strong partner on your register or at project level through a joint venture is key,” Mannolini said.

“If you’re on your own, you’re in serious trouble because the market will be closed to most juniors for potentially a very long time,” he added, estimating that could stretch until 2022. 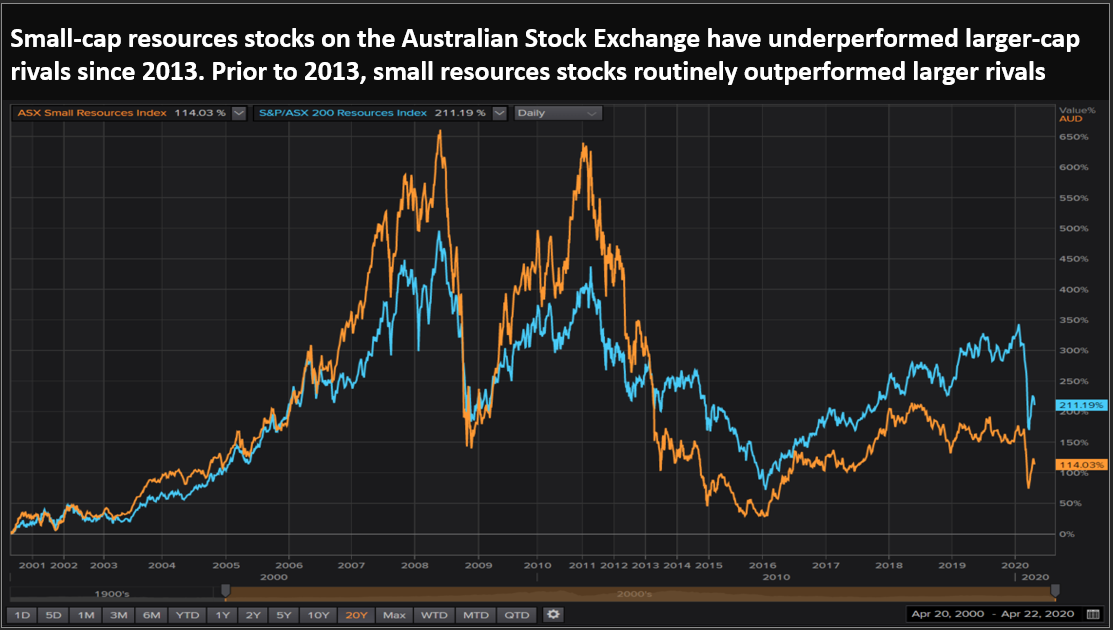 Relative to the 2008 downturn, Australian gold explorer Encounter Resources (ENR.AX) is in a much stronger position, with partners that can offer some income from equity injections, project generation fees and management fees, managing director Will Robinson told Reuters.

Encounter has tie-ups with Newcrest (NCM.AX) and mid-tier nickel producer IGO (IGO.AX). Robinson said the income helps with cost and reduces their cash burn “while minimising demand on calling on (shareholders) for money.”

Juniors with decent projects may find themselves in the spotlight for larger firms who see opportunities.

Africa-focused explorer IronRidge Resources (IRR.L), which is seeking investment from a gold company, has seen growing interest from bigger miners since the coronavirus shutdowns began, said managing director Vincent Mascolo. He declined to provide names because talks were confidential.

The junior exploration firm has lithium, iron ore, bauxite and gold projects across Ghana, Cote d’Ivoire, Chad, Gabon and Australia. Ironridge plans to monetise, divest from, or convert to a joint venture its lithium project by the end of 2020.

“Anyone that tells you it’s not a difficult time is lying,” Mascolo told Reuters. “Everyone is budget conscious. ... We’re not producing, we’re still paying wages, we’re not retrenching anyone through this challenging time.”

But as the majors’ business-development teams and geologists have to work from home, they are focusing on finding new projects, he said

“What we’re looking for now is new blood from a top co-investment,” he said. “We would ideally be looking at a gold producer.”

For some, these tie-up opportunities may come at a cost.Nevada Copper Corp (NCU.TO) last December opened the first U.S. copper mine since the late 1970s, then mothballed it this month because of the coronavirus. The company worked out a deal with Germany’s KfW IPEX-Bank to delay about $12 million in debt payments. But even with that move, share price losses have triggered a debt-to-equity conversion from its largest shareholder, Pala Investments, which will give Pala a greater than 50 percent stake in the firm.