Stockpiles dropped 36.6% in April, compared with the previous month, to 230,956 tonnes, exchange data showed on Thursday.

Lead stocks fell the most among all base metals in ShFE warehouses in April, dropping by over a half in a month to 6,658 tonnes. This was the lowest level since end-October 2018.

Aluminium stocks in ShFE warehouses fell 10.4% over the week to 410,543 tonnes on Thursday. In April, inventories fell 22.3%, their biggest monthly drop since end-December 2019, the data showed.

Nickel had the smallest inventory drawdown during the month among all ShFE base metals, with stocks falling only 4.4% from March to 27,421 tonnes.

ShFE tin inventories fell 19.5% in April, compared with the previous month, to 3,572 tonnes, while zinc stocks declined by nearly a quarter during the same period to 120,881 tonnes.

For a graphic on Copper inventories in ShFE warehouses fall the most in 31 months, click here

Stockpiles of five main steel products held by traders in China dropped 7.3% from a week earlier to 18.76 million tonnes on Thursday, the fastest weekly drop since mid-October, fuelled by robust construction activities and restocking demand ahead of China’s May 1-5 holiday.

In April, steel inventories plunged 29% from the previous month, easing to similar levels seen after the Lunar New Year holidays in the past few years.

However, the steel industry body and analysts have warned of oversupply risks, as mills are cranking up output on decent profit margins, despite an overhang of inventories and a slowdown in global demand due to the pandemic.

For a graphic on China steel inventories vs weekly output, click here 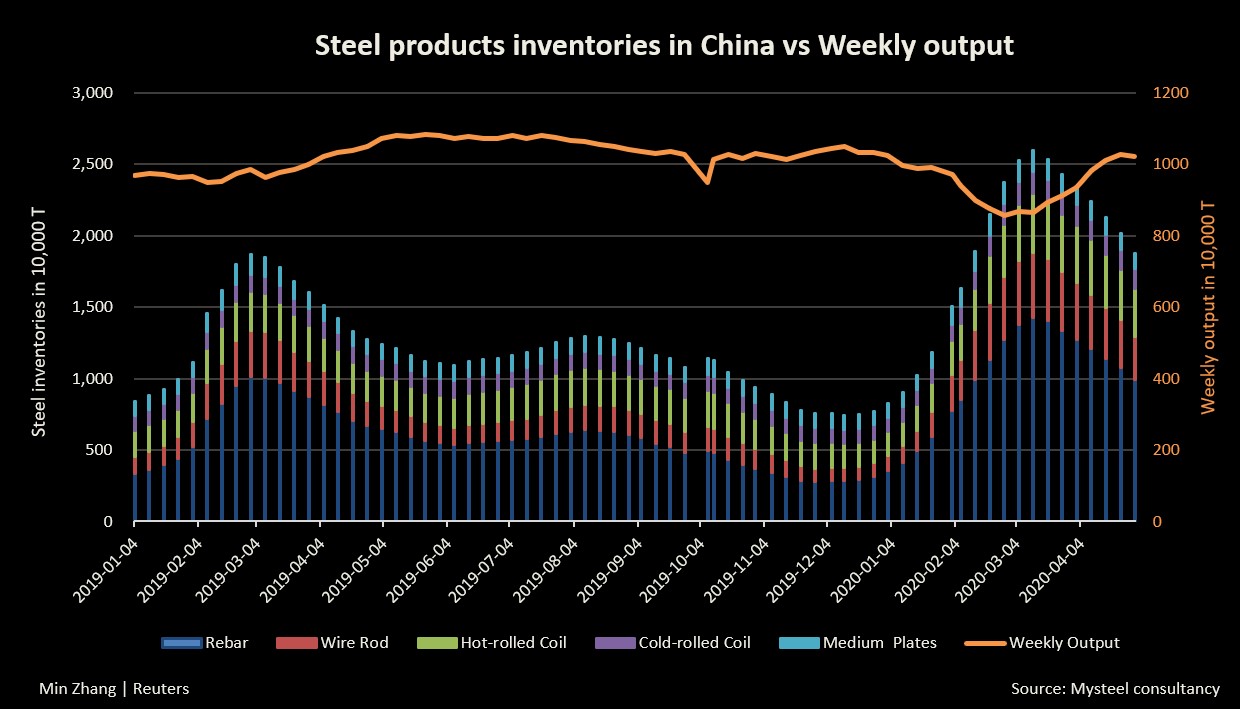 Reporting by Mai Nguyen in Singapore and Min Zhang in Beijing; editing by Uttaresh.V