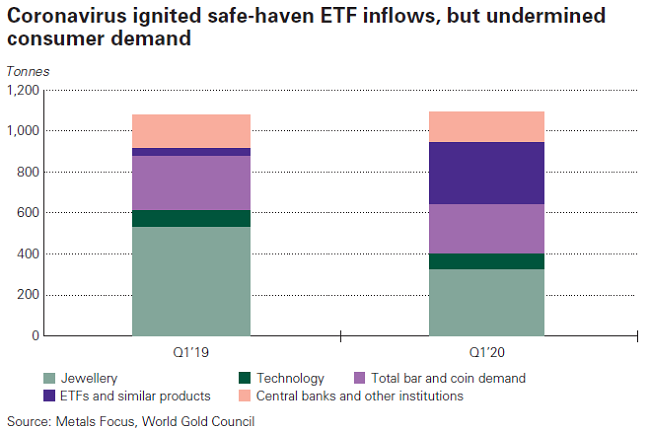 (Kitco News) - Gold-backed exchange-traded products were the prevailing asset to own, driving global demand for the yellow metal in the first quarter, as the world economy was crushed by the COVID-19 health crisis, according to the latest research from the World Gold Council (WGC).

Thursday, in its first-quarter Global Demand Trends report, the WGC said that total gold demand increased to 1,083.8 tons between January and March, up 1% compared to gold demand in the first quarter of 2019. 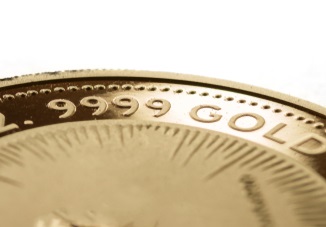 The dominant theme in the gold market remains unprecedented investor demand for the yellow metal, through exchange-traded funds (ETFs). The report said that gold-backed ETFs saw inflows of more than 298 tons in the first three months of the year, which pushed global holdings in these products to a record high of 3,185 tons. The WGC said that ETF inflows in the first quarter were up more than 300% compared to inflows last year.

“The coronavirus outbreak, which swept the globe during the first quarter, was the single biggest factor influencing gold demand. As the scale of the pandemic – and its potential economic impact – started to emerge, investors sought safe-haven assets,” the analysts said in the report.

ETF demand, which hit its highest level in four years, helped to drive prices to a nearly 8-year high, the WGC said.

A rush into ETFs is pretty much the one factor that drove gold demand as key sectors saw significant declines.

The WGC said that bullion investment in coins and bars in the first quarter fell to 241.6 tons, down 6% from the first quarter of 2019. However, it was a tale of two markets as Western demand for bullion coins hit a three-year high of 76.9 tons, an increase of 36% from last year.

“Demand for small bars is far more prevalent in East Asian markets, which were among the earliest to be hit by the coronavirus and lockdown measures. Local record high gold prices in these markets also encouraged profit-taking at points during the quarter,” the analysts said.

Jewelry demand fell off a cliff in the first quarter

While investment demand was strong in the first quarter, the same could not be said for the jewelry market, the most significant segment of demand for physical gold.

“Almost without exception, jewelry markets across the globe recorded y-o-y losses as the impact of the coronavirus compounded the effect of high, and steeply rising, gold prices,” the analysts said. “Jewelry consumption plunged in Q1 as local gold prices in various countries rocketed and markets were shuttered in efforts to contain the coronavirus pandemic.

In total, global jewelry demand dropped to 325.8 tons, down 39% compared to the first quarter of 2019. Jewelry demand fell to its lowest level on record, the WGC said.

The report noted that China was the hardest hit, with jewelry demand falling 65% in the first quarter.

Looking at Indian jewelry demand, another essential gold market, the WGC said that demand fell 41% in the first quarter. They added that jewelry demand could get a lot worse.

“While Q1 demand was hard hit, we expect the impact of COVID-19 to be more severe in the second quarter, as the lockdown extends into May. This will impact gold demand during the key buying festival of Akshaya Tritiya, as well as wedding-related purchases,” the analysts said.

The WGC said that U.S. jewelry demand saw its first quarterly decline since the fourth quarter of 2016.

“The healthy growth in U.S. jewelry consumption over the last three years abruptly reversed in Q1. Demand slipped 3.7% y-o-y to 23.1t, the decline being almost purely COVID-related,” the analysts said.

Central bank demand totaled 145 tonnes in the first quarter, an 8% decline compared to last year. The WGC noted that only six central banks purchased more than 10 tons of gold between January and March.

“While central bankers around the globe were focused on the measures needed to contain the economic impact of COVID-19, the need for robust, liquid and diversified international reserves was apparent. And positive net purchases of gold confirm that it remains an important component of those reserves,” the analysts said.

While the gold market continued to see demand growth, the market also saw a decline in supply. The WGC said that total gold supply in the first quarter was 1,066.2 tons, down 4% compared to the first quarter of 2019.

The WGC noted that mine supply dropped 3% as miners had to shut down production last month as governments tried to slow the spread of the coronavirus, closing all non-essential businesses.

“The y-o-y decline in mine production in Q1 is somewhat unsurprising given the scale of disruption caused by the global coronavirus pandemic. Most industries have been affected by the spread of the virus, and mining is no exception,” the analysts said.