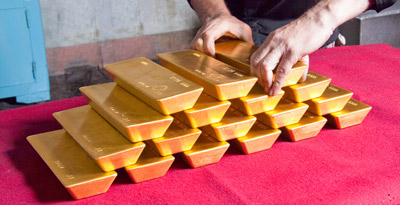 (Kitco News) - Venezuela had sent about 9 tons, or $500 million, worth of gold to Iran in April, a figure which accounted for a sudden drop in Venezuela ’s official foreign reserves, this according to a Bloomberg report.

According to the report published Thursday, Iran has been raiding its gold vaults and selling its reserves to its long-time ally, Iran; Venezuela now holds just $6.4 billion in hard-currency assets.

Gold is being used as payment to Iranian aid for the troubled South American economy, according to the report.

Both countries have been hit by American sanctions and have both seen their oil exports banned to the world ’s largest economy.

“The two nations -- both pariahs of sorts in international circles -- are working more closely together as they try to withstand withering U.S. sanctions and a coronavirus-sparked collapse in the price of oil, their main source of revenue. For Iran, the deals provide a fresh source of revenue. For Venezuela, they ensure that its supply of gasoline doesn ’t totally run out,” Bloomberg reported.

As multiple Venezuelan planes have been spotted landing in Iran, the U.S. has responded by denouncing growing cooperation between its two adversaries.

"These flights must stop and countries should do their part to deny overflights just as many have already denied landing rights to this sanctioned airline," Secretary of State Mike Pompeo told reporters at a press conference Wednesday.

The news of Venezuela ’s offloading gold to Iran come as Venezuela has announced earlier its plans to sell some of its gold reserves to the United Nations to help with coronavirus relief after failing to repatriate its gold back from the Bank of England.

Iran is the latest buyer, but was not the only destination for Venezuelan gold; similar deals have been made with Russia, Turkey, and the United Emirates, all of which have been intervened by U.S. authorities.

“The sanctioned Tehran-based carrier Mahan Air has flown more than half a dozen jets to the South American nation in the past week alone. Most delivered gasoline additives, parts and technicians to help repair a key refinery along Venezuela ’s northwestern coast,” Bloomberg reported.

U.S. sanctions, coupled with a collapse in the oil market in recent years, have sent the South American nation into extreme poverty.

Venezuela ’s currency continues to be in free-fall, with the inflation rate climbing to about 3,500%, according to a Bloomberg Index.

There is a battle for control over the remaining hard assets in Venezuela between current leader Nicolas Maduro and Juan Guaido, the National Assembly leader backed by the U.S., who is trying to install a transitional government, Bloomberg reported.