Will gold's seasonality kick in? Here are the price levels for May 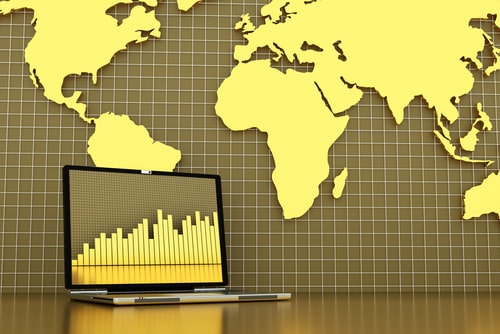 (Kitco News) Gold has managed to pull itself back up above the $1,700 an ounce level on Friday afternoon as U.S. President Donald Trump turned up the geopolitical pressure by threatening new tariffs against China over the coronavirus crisis.

However, for the week, though, gold is down more than 1.5%. Still, analysts are confident that the precious metal will make up the lost ground on increased geopolitical tensions and more bad economic data next week. At the time of writing, June Comex gold futures were trading at $1,706.80, up 0.74% on the day after tumbling below $1,700 an ounce earlier in the session.

The end-of-week move down was driven by "end of month position squaring and USD flows in a low liquidity environment," TD Securities head of global strategy Bart Melek told Kitco News on Friday.

Many analysts view lower level in gold as only temporary. "There is a lot more upside for gold to make up some of the losses this week. The outlook is still pretty bullish for gold in general. This is just a bump in the road before we see higher prices next week," Gainesville Coins precious metals expert Everett Millman said on Friday. "My outlook is for gold to go higher."

On the downside, however, there is a much wider range, the precious metals expert warned. "Because we have stayed well above, $1,500 for so long. There is a little bit of a wider downside risk. I wouldn't say it's a greater risk of gold being lower in May. But if it does, the range could be much wider down to about $1,500," he noted.

Blue Line Futures chief market strategist Phillip Streible said he is optimistic about gold. "I think $1,700 is a good value zone. I really want to see that market hold $1,660."

A must-watch driver next week is the U.S.-China tensions with markets eyeing any potential escalation from either side, said Millman.

"That's absolutely something that should be on everyone's radar because it could get very bad very quickly," he noted. "Long before the coronavirus, the big geopolitical and macro economic factor for gold was the trade war between the U.S. and China. So if those tensions again escalate, we could revert back to that being the big driver for global markets, especially if China retaliates rhetorically against the U.S."

Trump told reporters on Thursday that the phase-one trade deal with China was now secondary to the coronavirus pandemic as threatened new tariffs against Beijing.

"We signed a trade deal where they're supposed to buy, and they've been buying a lot, actually. But that now becomes secondary to what took place with the virus," Trump said. "The virus situation is just not acceptable."

It is still unclear what retaliatory measures could follow, with The Washington Post reporting on internal discussions of possibly canceling some of the massive U.S. debt held by China.

These tensions will definitely be reflected int he gold space, said Streible.

"It seemed like Trump hinted that we are going to turn the heat back up on China and hold them responsible for some of this economic downturn," Streible stated. "Possibly curbing some of the debt payments to China was thrown out there. That took the wind out from underneath the bond market. Although that would not happen because that can cause serious ramification in the U.S., it did cause some investors to leave the bond market into the gold market."

Some analysts have pointed out that it is strange for Trump to ramp up geopolitical tensions when the U.S. economy is facing such a drastic downturn.

"Talk is Trump may hit China with tariffs, which takes us full circle and seems bizarre to do this when the U.S. economy about to go into the eye of the storm…but there is little doubt the finger-pointing has increased in the past two days...will people start talking RMB devaluation? This a potential market thematic to watch, as it just accelerates the anti-globalization view," said Pepperstone head of research Chris Weston.

May will see more and more economies slowly begin to re-open. Texas and Ohio are now joining Georgia with a slow relaxation of restrictions. As more relaxed rules are rolled out, concerns about a potential second COVID-19 wave will rise.

"Given the medical community consensus that a vaccine is 12-18 months away at best, we factor in a low probability of a full return to work. Moreover, the estimate is that until testing in a country is showing no more than 8-9% positive results for infection, it implies that the country does not have sufficient testing in order to keep the growth of the virus at bay. With the U.S. and many other countries still running close to 20%, this means we think we need to further scale back either how quickly many can return to work, or else how likely further infection waves are," TD strategists said on Friday.

In the short-term, economies re-opening will not have much of an impact on gold, Melek pointed out. "In the short run, gold will be range-bound and probably towards the lower bound of the trading range, which is a little bit maybe below where we are now. We're looking at support around $1,650. I don't think we break lower … The second quarter could be quite rough for gold. It's gotta be difficult to have gold breakout higher, at least in the early part," he said.

But in the long-term, gold prices stands to benefit as attention turns to inflation significantly, Melek added. "Ultimately, once there is a clear path to growth with all the trillions and trillions of dollars worth of stimulus coming in, there will be renewed concerns that this whole fiscal imbalance around the world may be monetized and that real interest rates will stay lower for longer. I think gold moves higher," he noted.

Investors will see a lot of bad economic data come out in May, including the U.S. unemployment numbers for April — they key release to watch next week.

More than 30 million Americans have filed for unemployment benefits in the past six weeks, and Friday's nonfarm payrolls data might reveal more information.

"[Next week], attention will turn to the size of the damage caused by the lockdowns. Most pertinently, the U.S. week ahead will see the release of unemployment figures. Our team looks for 21 million jobs to be lost in the April nonfarm payrolls report, triggering a spike in the unemployment rate spike to 16%," ING strategists said on Friday. "A further decline of 12 million jobs and a rise in the jobless rate to 22% may be seen in the May report."

Other significant releases scheduled for next week include Monday's U.S. durable goods orders from March, Tuesday's ISM non-manufacturing from April, and Thursday's Bank of Japan's meeting minutes as well as Bank of England's policy rate decision.

"Like the Federal Reserve and European Central Bank, we'd expect the Bank of England to use its meeting next week to take stock – we aren't expecting anything new. Like other central banks, the BoE has been adept at acting between meetings, and with rates close to zero, and a vast QE package in place, policymakers are 'all in' for the time being," ING strategists added.

If this were a normal year, the gold market would have seen prices weaken due to the regular seasonality of the metal, Millman pointed out

"May usually is not good for gold. Under normal circumstances, the seasonality for gold is that it tends to slump during the summer. May would definitely be the start of that," he said. "Almost every year under normal circumstances, gold performs well in Q1 and Q4, but in the middle, very rarely have I seen gold go higher unless there was a geopolitical emergency or some type of financial crisis."

But this year is obviously not a regular year and seasonality conditions might go out the window, noted Millman, adding that investors will have to wait and see.

"We're not in normal seasonality conditions and we haven't been since the end of last year. So it will be interesting to see whether or not that normal seasonality reimposes itself. Under normal circumstances, we'd expect gold to be lower during the summer, but that doesn't seem to be the case right now," he said.