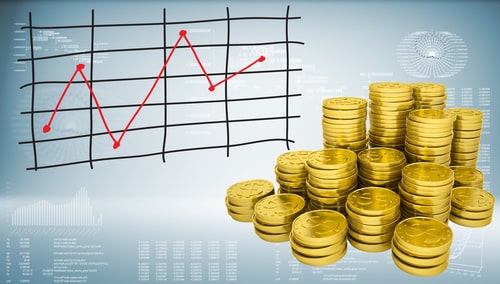 (Kitco News) Gold's price outlook is to the upside as the world is faced with a slate of bad economic data, possible second wave of coronavirus, and unlimited stimulus, which has triggered massive gold investor demand, this according to The Perth Mint CEO Richard Hayes.

“My gold outlook is biased to the upside,” Hayes told Kitco News, pointing to the COVID-19 environment as being a key driver even once the economies begin to re-open.

“As we see a gradual easing of all the restrictions and businesses start to reopen, that will certainly have an impact on precious metals prices. What I would say listening to the CDS and the WHO is that there is a significant danger of a second COVID-19 wave,” Hayes pointed out. “If you see a second COVID-19 wave, that will give the gold price a reasonable kick along.”

Hayes said he wouldn’t be surprised to see gold reaching new record highs in U.S. dollar terms in the near future, adding that the levels are not that far off in percentage terms from 2011-2012 all-time highs.

Another major positive driver of gold prices is the unlimited stimulus unleashed by central banks around the world, noted Hayes. It is still unclear what impact the trillions of dollars being pumped into the global economy will have, especially when it comes to the value of fiat currency, he added.

“There is certainly talk of this latest round of stimulus being more inflationary than what we've seen before,” the CEO said. “If you look at the financial crisis of 2008-2009, there was a fairly big expectation that inflation would kick in, but that didn't happen. This time, the underlying fundamentals of why the stimulus was given were different. A lot of the money that's being pumped into the economy is now ending up more on Main Street than Wall Street.”

On top of that, there is a legitimate concern over a high number of potential bankruptcies or bad loans the banks will have to deal with.

“One of the big things that is likely to make investors look a little more seriously at increasing their gold holdings will be [all the potential bankruptcies]. As the COVID restrictions start to ease back and the banks get a better idea of what their lenders books are really going to look like, I suspect they're not going to look quite horrible,” Hayes said.

A lot of small businesses stopped operating during COVID-19 crisis with the hopes that they could resume once the lockdown is over. But there will likely be a whole sway of companies that will be forced to go bankrupt. “It's going to be a lot of provisioning by banks for doubtful loans or bad loans,” Hayes described.

‘Psychological feeling of a shortage’

Another element in higher gold price equation is the “psychological feeling of a shortage of physical gold.”

The perceived gold supply squeeze, which markets have seen in April due to lack of air transportation available and temporary closures of some major refineries due to COVID-19, made it seem like there is a shortage of gold out there.

“Refinery output, psychologically, is going to have some driving of prices, especially if you've got a second COVID-19 outbreak. What we've seen is the Swiss refineries close down completely and then reopen to about 50% capacity. The Rand Refinery in South Africa is probably only running at 50% capacity at the moment,” Hayes said. “It is also partly driven by what's happened on the Comex with a very big dislocation between the physical markets and the paper markets. The impact of that is temporary, but certainly things like that psychologically will have an impact on the gold price.”

The Perth Mint has been one of the few refiners out there that has been unaffected by the coronavirus outbreak. The Australian refiner even added shifts to meet surging demand.

Investor demand has been massive for gold in the first quarter as many market players sought shelter in the yellow metal.

“There is phenomenal demand, especially for bullion coins. Demand has been very strong out of the United States. You've seen premiums that have increased quite significantly for gold one ounce coins. You’ve seen it with Eagles, Maples, and Kangaroos,” The Perth Mint CEO said. “Silver, we just can't make enough silver coins. For every one ounce Kangaroo we make, we could probably sell five or six into the U.S.”

When it comes to gold bars, it has all been about the kilo bars at the moment due to the COMEX play, said Hayes. “Over the last three weeks … demand rocketed for kilo bars for the first time in quite a long time. And those bars are generally ending up in the United States being delivered on to settlement on Comex contracts,” he said.

But demand for kilo bars is only a temporary phenomenon as Comex introduced a new contract that will allow London gold delivery of 400 ounce bars to be used in settlement, Hayes explained. “As a new contract starts to wind itself up, what you'll see is a significant lessening of kilo bar demand. This is a market anomaly that was caused by this great perception of physical shortage. There's plenty of gold around, but it's just in the wrong form, in the wrong place,” the CEO noted.

However, Hayes sees overall demand for gold as being reasonably stable over the next 12 to 18 months as he doesn’t see investors piling out of gold any time soon.

Not all positive for gold

Even though the stars seemed to have aligned for the gold market, it is not all positive for the yellow metal with a big headwind being lower official sector buying as central banks like Russia have announced a halt on further gold purchases.

“The oil market certainly has affected the Russian economy very significantly. Caused by a number of factors, not least of the fact that the world's just using less oil at the moment. It doesn't matter what supply cutbacks OPEC make, that's not gonna fix the oil price anytime soon,” Hayes said. “Russian central bank was a very large buyer of golden 2018 and through 2019. The Chinese central bank was a big buyer as well.”

This is one of the main obstacles for gold but the pluses are greater than the minuses. “Gold's role is still recognized as being that global haven and that refuge of last resort by investors globally. And that's not going away anytime soon,” Hayes added.

In terms of recommended exposure, Hayes pointed to between 5% and 10% exposure to gold for a wise investor. “Gold is a great insurance policy. And when everything else really has turned, your gold is still going to be there,” he said. “And we've seen that over thousands and thousands of years.”