Next step for gold price is to breach the $1,900 peak - Bloomberg Intelligence 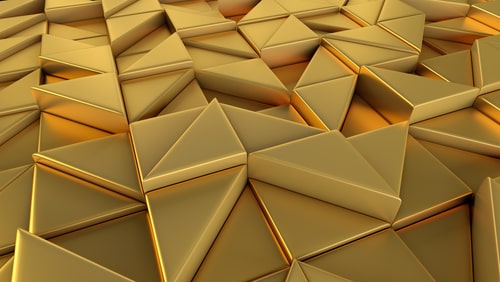 (Kitco News) The next step in gold’s recovery is to tackle the $1,900 an ounce peak reached in 2011, according to the latest commodity update by Bloomberg Intelligence.

Gold is looking at a similar launchpad as in 2008, when prices breached $1,000 and began the rally which led to all-time high level of just above $1,900, said Bloomberg Intelligence senior commodity strategist Mike McGlone.

“It was the cut to zero interest rates by the Federal Reserve in December 2008 that accelerated the gold bull market to the 2011 peak. Covid-19 is a worthy catalyst to buoy gold toward its highs. That fact that the metal has reached records in most currencies leads us to expect that a similar result for dollar-denominated gold is only a matter of time,” McGlone wrote in May’s update.

Gold is set to hit new 2020 highs on unprecedented Federal Reserve monetary stimulus. “With base rates at zero or negative, and the Federal Reserve embarking on seemingly unlimited monetary stimulus akin to 2008, we see gold extending its $1,900-an-ounce peak as the next in a stair-step recovery process,” McGlone noted. “The quasi-currency price has a strong relationship with Fed rate expectations.” 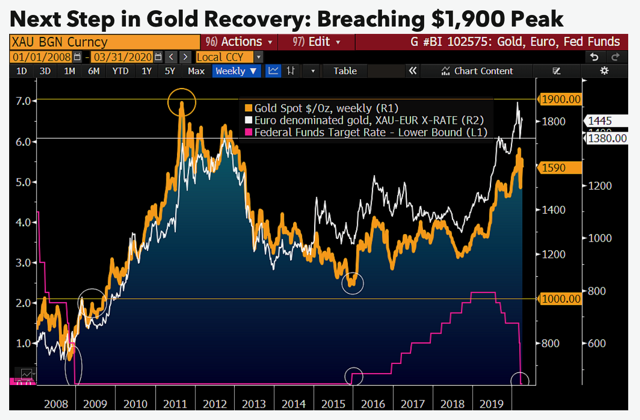 Surging debt-to-GDP levels are they key thing to pay attention to with unprecedented stimulus when it comes to gold prices. “The propensity of governments to indiscriminately flush systems with cash, on the back of Covid-19 demand shocks, promises to add similar buoyancy to debt-to-GDP, along with gold,” the strategist noted.

The U.S. dollar is not even a real threat to gold’s attempt at $1,900 anymore as the precious metal does not need to wait for peak dollar.

“Gold is showing divergent strength vs. the dollar, similar to the early days of the bull market at the start of the millennium … Our graphic depicts the upward-sloping 50-week averages for gold and the dollar, akin to 2001-02. When the greenback peaked about two decades ago, it was a launchpad for gold,” McGlone said.

In the commodity space, it is precious metals versus everything else as the former is the only sector reporting 2020 gains.

“The extent of the Covid-19-fueled global recession and corresponding monetary stimulus are firm tailwinds for gold, and obstacles for most other commodities. We see the favorable pre-outbreak conditions in place for precious metals vs. most other assets simply accelerating,” McGlone pointed out.