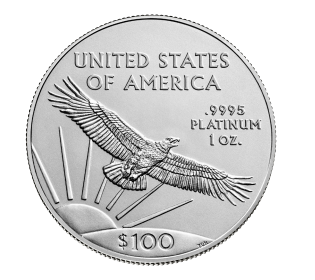 (Kitco News) - The last time the U.S. Mint sold this many platinum coins, President Bill Clinton was being tried by the U.S. Senate and Spongebob SquarePants was premiering on Nickelodeon.

The sales are only eclipsed by 1999 sales, which totaled 56,707 oz over the same four-month period, running from January to the end of April.

Launched in 1997, the Mint claims that American Eagles are the U.S.'s only official platinum bullion coins.

The platinum bullion coins have 99.95% purity and are guaranteed by the U.S. government.

"The U.S. Mint issues 1 oz American Eagle platinum bullion coins in response to ongoing investor demand. This year's mintage, however, has been extended due to exceptional demand from investors seeking to own physical platinum in the wake of the COVID-19 pandemic," said the Mint in a news release.

The Mint said a variety of factors determine price, such as prevailing spot price, distribution and marketing costs and investor demand.

"The soaring demand for precious metal coins in March and April this year, together with constrained distribution, has lifted this premium to four times its typical level for gold and platinum, and nearly three times for silver."