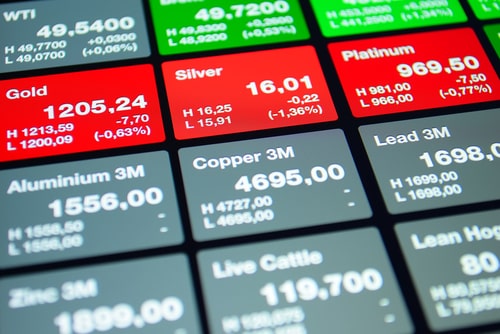 (Kitco News) British multinational investment bank HSBC Holdings Plc, which is one of the biggest players in the gold trading space, repeatedly breached its trading limits during the chaotic market conditions set off by global lockdowns in March, according to the bank’s quarterly filing.

HSBC said it felt “delivery disruptions in the gold market,” citing it as one of the reasons why it breached its own value-at-risk limits 12 times in March. This is something that does not happen more than three times a year under normal circumstances.

In March, gold prices saw extreme volatility, plunging from $1,700 an ounce to well below $1,500 an ounce and then suddenly climbing back up to above $1,600 an ounce. On top of that, huge price spreads developed between between spot (London market) and futures (New York) prices due to temporary closures of major refineries across the globe and logistical issues connected with lack of air transport.

The divergence in prices was the highest in four decades at the end of March, rising to about $70. Under normal conditions, the difference between spot and futures prices does not vary more than a couple of dollars from each other.

HSBC described the gold market as “highly illiquid on news of refinery closings,” which led to wild swings in trading profits in March, according to the filing.

The bank reported that its metals trading revenue for the quarter saw a loss of $1 million due to the COVID-19 situation, the bank noted, citing “market volatility and unfavorable valuation adjustments on exchange for physical transactions.” In comparison, during the same period last year, HSBC saw a profit of $38 million.

The bank’s average annual metals trading revenues has been around $215 million for the past three years, Bloomberg reported.

There were other contributing factors to the unusually high number of profit-and-loss limit breaches, including volatility in credit spreads, interest rates, and volatility in palladium.

Another international bank struggling with value-at-risk limits breaches was French lender BNP Paribas, which reported nine such instances during the quarter. The bank cited “the shock of volatility on equity markets.”

Also, HSBC was not the only bank struggling with its metals trading business. Reuters broke the story last week that Canadian Bank of Nova Scotia (Scotiabank) (TSX: BNS.TO) now appears to be closing its metals business.

The goal is to reportedly wind down all existing metals business by the beginning of 2021.

“The Scotiabank shuttering of its metals business is a sign of these historic times of markets upheaval. However, such is not a shock to the metals marketplace that has in recent weeks already seen many companies and mines so severely impacted by the COVID-19 pandemic,” said Kitco’s senior technical analyst Jim Wyckoff.

One fear with such closures is that the spot prices could become even less reliable. “It definitely will have an effect on price discovery. The less big banks that are participating in the metals markets, the less reliable those prices coming out of London will be, which we've already seen has been a problem in the past couple of weeks,” Gainesville Coins precious metals expert Everett Millman told Kitco News last week.