What does the new 'big quest for yield' mean for gold prices next week? 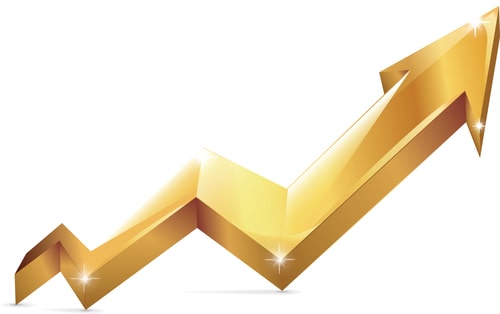 (Kitco News) With the futures market starting to price in the possibility of negative U.S. policy rates by 2021, traders are in a desperate search for yield, pouring money into the stock market, which gold is closely tracking, according to analysts.

“One of the main drivers right now is the fact that the Fed funds rate went negative yesterday and that negativity has spread down to the December contract. The Fed funds futures for December of this year are pricing in negative rates. That is supportive for gold,” Blue Line Futures president Bill Baruch told Kitco News on Friday.

Gold prices are looking at a gain this week of around 0.8% with June Comex gold futures last trading at $1713.80, down, 0.70% on the day. The trend this week has been gold traders stepping to buy dips in prices, helping gold stay above the $1,700 an ounce level.

Possibility of negative policy rates by early of next year is helping gold prices out and is something to watch next week as well, said TD Securities commodity strategist Ryan McKay. “Some of the main drivers will be continued watching of the Fed funds futures, which further out on the curve started to have a negative yield, which supported gold in the last days,” he said.

The negative rate expectations are also kicking off a “big quest for yield,” said LaSalle Futures Group senior market strategist Charlie Nedoss. “Equities seem to be leading the way. That is the only place where they have been any yield. There is a big quest for yield. And gold continues to follow stocks higher,” noted Nedoss.

There seems to be an inverse relationship happening between equities and gold as the yellow metal is rising along with stocks, the strategist pointed out.

“Gold continues to follow the equity markets higher,” he said. “You have that inverse relationship with the dollar here too with the perception that the administration even talking about possibly going negative on rates … Negative rates help the dollar come off, which helps the equity markets and you see people throwing more money into stocks.”

"My suspicion is that the next five years will be very good for natural resources investors, with precious metals enjoying a two or three-year bull market," says Rick Rulehttps://t.co/706f5ajcfa@RealRickRule @davidlinMTL #gold #mining #recession #economy

Gold getting too much attention?

Some analysts pointed out that they see gold as trading in a tight range next week as investors explore risk-on assets.

“There has been quite a bit of attention on gold of late and that does tend to ebb and flow back and forth. We are probably at the point where investors are going to be paying attention to risk assets just because there is no clear direction one way or the other for the broader market. That will keep gold parked where it is,” Gainesville Coins precious metals expert Everett Millman told Kitco News on Friday.

Some volatility is expected going forward, added Millman, highlighting that he is neutral on the precious metal in the short-term.

“This week has been a preview of what to expect in this interim period of the coronavirus crisis. I don’t see any strong drivers for gold that could move it very far in either direction. It is very uncertain right now and I am neutral with a note about expecting volatility,” he said.

McKay also pointed to a general lack of interest in terms of volume and open interest in the gold market at the moment.

“The underlying macro story is supportive and does point to higher gold prices, but we are not seeing that translate into actual increases in open interest and volumes. The market is still reluctant to get in. And that may be because equities are so strong and it could also be because of the turmoil we saw in the gold markets in the last month or so,” he noted.

"We're going into a prolonged period of very soft economic growth. There is no rebound that is taking us back to where the economy was," says David Rosenberg, of Rosenberg Research and Associates https://t.co/2iDME5CYkR@neils_C @EconguyRosie #gold #economy #KitcoNews

Silver is finally joining gold’s party with July Comex futures climbing more than 1% on Friday and last trading at $15.765 an ounce. The higher move in silver could help gold move higher as well, explained Baruch.

“Silver has finally responded. Along with those low rate expectations, there is a search for yield. Stocks have been beneficiary in that and it helped to push back deflationary fears. And both of those narratives are helping silver. And gold cannot perform without silver,” he said.

Silver is back above the 50-day moving average, but it needs to go above $16.25 to break out added Baruch. “Silver joining the party is what is going to fuel gold,” he stated.

A critical level for gold next week is $1,730 an ounce, according to Baruch. If the precious metal moves above it, “gold and silver can work together … I expect higher prices.”

McKay sees gold trading range-bound next week. “There is a little bit of upside to the $1,730 and downside is just below $1,700,” he stated.

For Millman, the upside is testing the $1,750 level again — “that is pretty strong resistance.”

However, on the downside, there is a lot more room for declines. “Support is a little bit less clear because gold has been bouncing around $1,700. We haven’t really seen it test a whole lot lower than that, so we may see support fall down as low as $1,650, $1,600,” he noted.

There is quite a lot on the macro data front next week. Still, it is unlikely to shake the markets too much unless there is a big surprise on the upside or downside, McKay told Kitco News.

“As we saw today, with worst jobs numbers in history, it is not having a massive impact,” he said. “Most macro data at the moment is not having much impact. People are expecting it to be fairly bad. The only way you get a major reaction is if it surprises one way or the other substantially.”

On Friday, markets digested the news of the U.S. economy lost 20.5 million jobs in April — the biggest drop in payrolls since the Great Depression. On top of that, the unemployment rate jumped to 14.7%, breaking the post-World War II record of 10.8% reported in November 1982. The bad news had no impact on the equity markets with the Dow up more than 300 points on Friday afternoon.

Next week, traders will have their eyes on Tuesday’s U.S. inflation data from April and Friday’s retail sales numbers from April, said McKay. “Expectations are still pretty firmly on the downside on the economic data,” he noted.

On top of that, there will be Wednesday’s U.S. PPI release, Thursday’s jobless claims, and Friday’s U.S. industrial production along with the New York Federal Reserve Empire State manufacturing index.