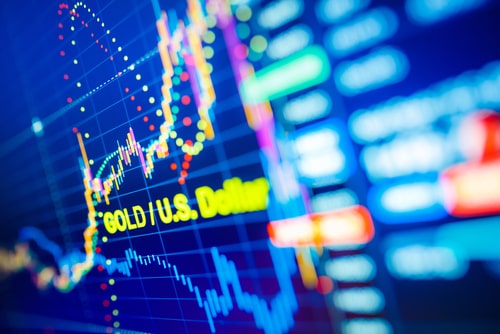 (Kitco News) It will take some time before gold is ready for the $2,000 an ounce level as the road to new record highs is looking bumpier, according to TD Securities.

While investors wait for those higher prices, the gold market is at risk of a downward move, TD Securities commodity strategists wrote on Tuesday.

“Before prices move into a significantly higher range, a drift lower is a significant risk,” the strategists said. “Somewhat higher real interest rates amid reduced systemic risk, the Fed's commitment to positive policy rates, transitory disinflation, a firm USD, ample availability of physical metal to deliver against COMEX futures (which may soften the 'gold shortage' narrative, albeit misplaced) and a firm appetite for equities are all reasons why the yellow metal may straddle the lower bound of the trading range, before surging higher.”

A big short-term concern for gold prices is disinflationary pressures, noted TD Securities, stating that very weak economic data around the world, including in the U.S., suggest that global economy will be operating below potential for a long time after the COVID-19 outbreak.

In the long-term, however, gold prices are heading higher, the strategists pointed out, citing policy rates being set below the rate of inflation.

“The resumption of the downward trend in real rates, which remain in negative territory, along with a low cost of carry and concerns surrounding fiat currency debasement as skyrocketing debt makes appealing various forms of debt jubilee in some circles, likely mean gold price could test TD Securities' target of $2,000+/oz in the latter part of 2021,” they wrote.

Gold has been trading in a narrow range these past few weeks after rebounding to near $1,700 an ounce following a major sell-off mid-March.

“The yellow metal rallied along with risk assets following the reduction of extreme volatility, after the U.S. Federal Reserve and other central banks announced measures to provide potentially unlimited support to credit markets and governments around the world provided countless trillions in fiscal support to keep consumers and corporations solvent,” TD Securities strategists said.

The eventual move towards $2,000 an ounce will be supported by a resurgence of investors’ interest in the yellow metal.

“It is very likely that the post COVID-19 world will be very different then it was just a few months ago. It will be one where the economy is functioning at below potential, with high long-term unemployment and with governments who will want to solve these problems by spending trillions of dollars, which they do not have. Conversely, central banks will provide virtually unlimited liquidity and having the willingness to buy up a significant portion of public, private and corporate debt,” the strategists said.

“In its quest to bring the economy to full employment, governments will continue to deficit spend, and central banks will very likely allow inflation to move above their current targets of two percent,” they added.

Negative real interest rates will make gold a cheap asset to hold in relative and absolute terms, the strategists explained.

“There is strong evidence that gold performs well when debt is skyrocketing. And, debt is at a record, with a very high probability it will reach much higher levels,” the strategists said.